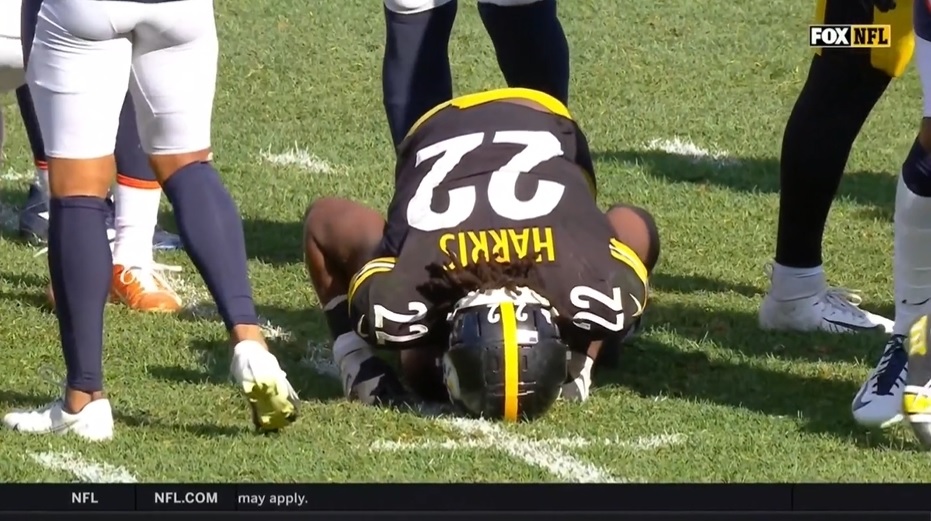 Pittsburgh Steelers rookie running back Najee Harris spent much of the second half of Sunday’s game stretching out his body, and ultimately did not finish. Not knowing exactly what the issue was, there was some concern over his health, though it only turned out to be cramping. He took ownership of this affliction when speaking to reporters on Friday, chalking it up to a choice of beverage.

“The cramping issue was on me”, he said when asked about it on Friday via the team’s media department. “I think I had some drink earlier this week, some alcohol. I don’t really drink, so yeah, that played a factor. That was the only reason why. I usually don’t cramp, but this week, I did”.

This is a slightly different, and more cautious answer than he gave back on Sunday, and perhaps wisely, because his first comment regarding cramping was more concerning, and made it sound as though it was a regular occurrence.

“Yeah, I cramped up a lot” at Alabama, Harris said on Sunday after the game when he was asked if he also had cramping issues in college. “Because, you know, I’m not used to the humidity. I’m from Cali. Ain’t no damn humidity over there, so I came over here, I was passing out almost every other day. Yeah. Crazy”.

I think that Harris has to learn a bit to be a little more serious in his answers so that he doesn’t get misinterpreted. That’s not a fault, merely his personality, but he plays in a business where his words, not his voice, will speak for him, and I can’t help but wonder if that’s why he gave a much more clear and direct answer this time around, so that people don’t go around expecting him to cramp up every time he hits 20 touches.

But the bottom line is that it doesn’t sound as though Harris expects cramping to be an issue again any time soon, provided that he makes the right pre-game choices. It won’t hurt that the Steelers have a bye week coming up after this week’s game, either.

Through five games, the first-round pick has rushed for 307 yards on 78 attempts with two touchdowns. He also has a team-leading 28 receptions for 198 yards and another touchdown, totaling 505 yards from scrimmage with three total scores.

And he’s just getting started. He’s already performing at a high level, with an upward-pointing arrow in terms of consistency, but the growth of the offensive line and their harmonizing with his style will only serve to further his game even more. Pretty soon he’ll have the defenses cramping and regretting their pre-game beverage selections instead of his own.