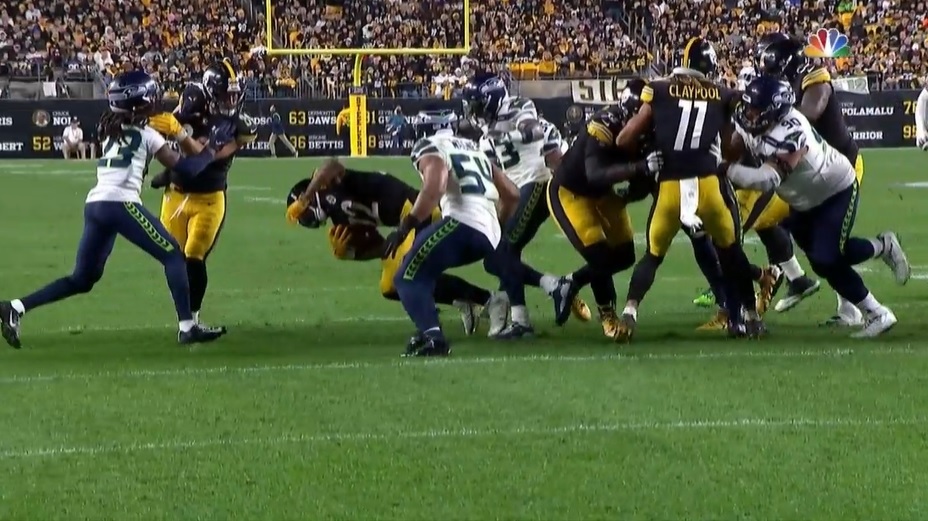 With a blossoming star at running back in Najee Harris, feeding him early and often has been a point of emphasis for the Steelers as of late. Harris enjoyed a solid game Sunday night, racking up 81 rushing yards as well as doing work in the passing game.

Despite possessing a poor defense, the Seahawks still have some hard hitters defensively, beginning with safety Jamal Adams. Adams had a few memorable hits on the night, but none more notable than the play before the two-minute warning in the first half. Harris talked about the hit after Sunday’s game.

”When Jamal Adams came and rung my bell, I didn’t have to get up. ‘Hey good hit man. That was a good hit,’” Harris said to NBC’s set after the game.

Notorious for being a thumper, it was of no surprise that Adams laid the wood on Harris. The play was a big one in the moment too, as it stopped Harris from getting a first down inside the red zone. The Steelers did end up scoring a touchdown on that drive though just before half.

Adams has been at the forefront of extensive criticism this season due to his lackluster play to go along with his lucrative contract. His impact Sunday night was noticeable though, affecting the Steelers running game early on in particular. The Seahawks used him in a variety of ways as they normally do. Adams is used in the box as more of a linebacker often times and more recently, a pass rusher.

“I saw him coming, but he got so low. I tried to meet him there. [He] rung my bell. That’s the stuff I like right there. That’s the football I like.”

The hit is one Steelers fans certainly don’t like to see their star rookie taking. It certainly hyped Adams up, as he began talking to the Steelers sideline after the play. The Week 6 bye gives Harris time to take a rest from hits like those.