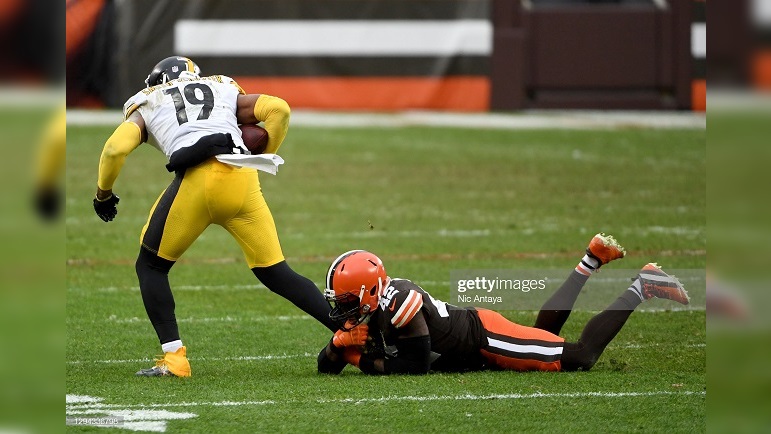 Remember that report from when the Pittsburgh Steelers first signed former first-round safety Karl Joseph to their practice squad? Gerry Dulac of the Pittsburgh Post-Gazette wrote that the intention was to sign him to the 53-man roster once he cleared through whatever COVID-19 protocols were required.

That never happened. He’s been on the practice squad for the past three weeks, and at least outwardly, we have not been given any indications that that will be changing. Still, defensive coordinator Keith Butler was asked about him yesterday, though it’s unclear what prompted the series of questions.

Safety depth had been a concern among fans throughout the entire offseason, and to the Steelers as well, given the fact that they took a fairly long look at Malik Hooker. They also brought in Joseph himself for a visit before he ended up signing with the Raiders, only to be released before the start of the season.

Pittsburgh has Minkah Fitzpatrick and Terrell Edmunds in the starting lineup, but their number three safety, who is also their slot cornerback, is rookie seventh-round pick Tre Norwood. Miles Killebrew, primarily a special teamer, is their other safety. They previously had Antoine Brooks Jr., a 2020 sixth-round pick, but he was waived injured in August.

Butler was asked about whether or not Joseph has grown to understand the defense in the past few weeks since his arrival. “Yeah, I think so. I think so, but he’s still got to do it and run it and be part of it, be part of the defense and stuff like that”, he said.

Ordinarily, questions are not random, but rather prompted by something. Is it possible that Joseph was getting more snaps during practice this week, or something that might indicate he could be called up? I don’t want to speculate beyond simply noting that questions tend to be sparked by something seen, but that’s not always the case, either.

Theoretically, the Steelers should now be able to re-sign Brooks if they wanted to. Currently on the Rams’ practice squad, three weeks have now passed since the end of the length of his injury settlement. But given that he is on a practice squad, Pittsburgh would have to sign him to the 53-man roster. There is no indication at all that they are interested in bringing him back, however.