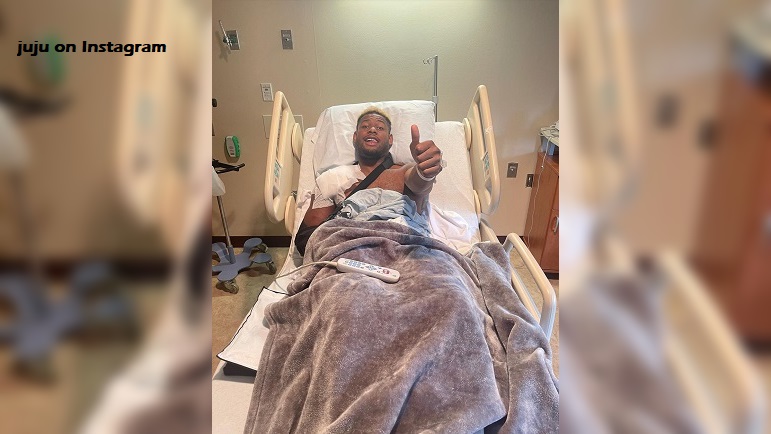 Smith-Schuster passed along a post-surgery update on his status on his social media accounts Wednesday afternoon.

Some words from me. Thank you everyone for the love and support! pic.twitter.com/kCmhyKSXVy

“Blessed to have had a successful surgery this morning,” Smith-Schuster wrote. “There’s no other way to say it, but I’m heartbroken that I’m going to be out for the rest of the season. It kills me to have worked hard all year to help our team on the field and now have my season cut short five weeks in. I’ll do everything in my power to recover and I’ll put in another full offseason of work next year to perform to the best of my abilities next season. Thank you to the doctors and hospital staffs for taking care of me, and to the Steelers organization for supporting me during this tough time! Thank you everyone for the well wishes too. I really appreciate all the love. Be back soon.”

Smith-Schuster will now be placed on the Steelers Reserve/Injured list in the coming days now that he’s had his surgery.

Smith-Schuster essentially signed a one-year, $8 million contract as an unrestricted free agent this past offseason after first entertaining supposed better offers from the likes of the Baltimore Ravens and the Kansas City Chiefs. The four voidable years remaining on the contract that he signed are reportedly set to void five days after this seasons Super Bowl takes place in February. In short, Smith-Schuster will again become an unrestricted free agent in March unless he can come to terms on a new deal with the Steelers before the start of the 2022 league year.

Whether or not Smith-Schuster ultimately re-signs with the Steelers will likely come down to what he’s looking to get paid and how many other suitors he has willing to pay him. He is still young and with his brand being well established now in Pittsburgh, one would think he would want to re-sign with the Steelers for at least one more season if at all possibly.

Smith-Schuster injured his shoulder this past Sunday during the team’s home win against the Denver Broncos. The injury happened when he was tackled by Broncos cornerback Kareem Jackson on an end-around running play. Smith-Schuster caught all of 15 passes in five games with the Steelers before injuring his shoulder.

“I’m hurt because I miss that guy,” Ben Roethlisberger said on Wednesday of the team losing Smith-Schuster for the remainder of the 2021 season. “I mean, what he brings to this team is energy, is excitement. The leadership. It sucks. It really does. And I’m not even the one hurt.”