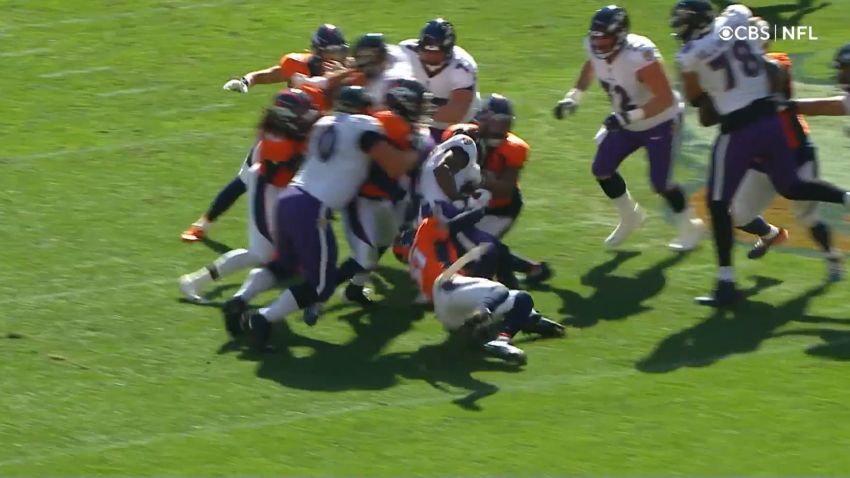 Baltimore Ravens head coach John Harbaugh had plenty of salt in his diet when he was asked questions on Monday following his team’s win over the Denver Broncos, which featured them running a meaningless play in a 16-point victory on the final play of the game for the sole purpose of picking up three rushing yards in order to extend their 100-yard-rushing streak up to 43 games, tying an NFL record.

Broncos head coach Vic Fangio, when asked about it, said that he felt it was “kind of bullshit” and added that that is the sort of thing you would expect from the Ravens, as it is just the way that they operate. Harbaugh’s press conference took place after those remarks, and it was peppered with grievances and offense, even when he was talking about running back Le’Veon Bell.

Bell, the former Steelers All-Pro, made his Ravens debut on Sunday after spending the first three weeks on the practice squad, originally signed only after Baltimore lost each of its top three running backs—J.K. Dobbins, Gus Edwards, and Justice Hill—to torn ACLs, forcing them to scour the trash heap for has-beens to cobble together a backfield.

Bell was on the bottom of that scrap heap, behind Latavius Murray and Devonta Freeman, but he got the call-up Sunday, and he started out his Ravens career with a one-yard run on 3rd and 3. In all, he totaled 11 rushing yards on four attempts, and did not catch the only pass thrown his way. But Harbaugh had his share of praise for the veteran.

“Le’Veon did a really nice job in pass protection – a couple really good blocks in there and made a couple nice cuts”, he said of his former rival. “He got hit in the backfield one time, spun out”…and then Harbaugh remembered that Fangio brought up player safety in his decision to run a play with three seconds left, adding, “speaking of player safety, getting grabbed and his head twisted – that was one for player safety. But he made a couple guys miss. I thought he did well”.

Technically speaking, Bell is now a part of the longest consecutive 100-yard-rushing-game streak by a single team in NFL history, contributing four carries for 11 yards at 2.8 yards per attempt during that 43-game span, tying the record owned by his original team, the Steelers. Quite a remarkable achievement to fall back asswards into.