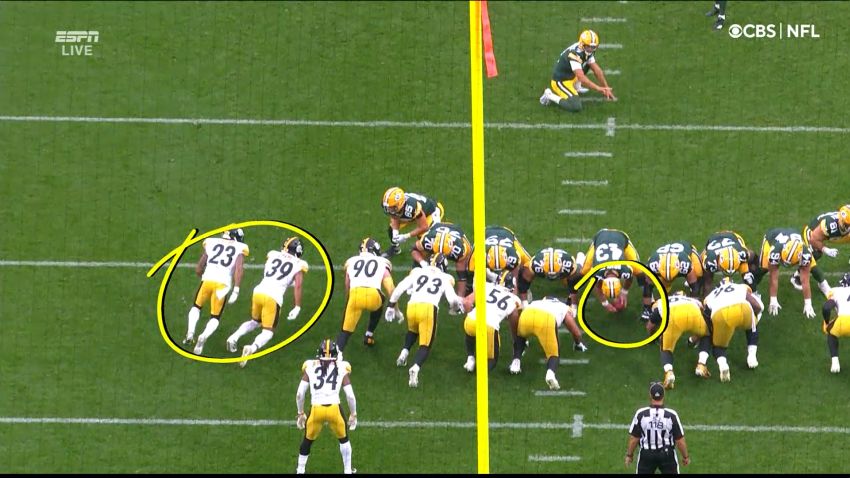 Arguably the most pivotal moment in today’s game between the Pittsburgh Steelers and the Green Bay Packers was a special-teams play that wasn’t. With 20 seconds left in the first half, the Packers lined up for a field goal attempt to make it a 17-10 game, but the Steelers got a couple of players free.

Safety Minkah Fitzpatrick was able to block the attempt, and proceeded to scoop it up and return it all the way by himself for a touchdown. But it all game back after the officials flagged cornerback Joe Haden, who also rushed off the right edge with Fitzpatrick, for being offside.

It has been highly debated whether or not he was, indeed, offside, with even former head of officiating Gene Steratore weighing in, stating that the players and the center move simultaneously on the play, “which would mean no foul”.

Certain infractions are easier to see from the field-level, but from the angles that I’ve seen of the field goal in #PITvsGB:

Unless the @Steelers were lined up in the neutral zone, the players move simultaneously with the snap which would mean no foul. pic.twitter.com/EBOvmtiPuB

That’s a 10-point swing, taking a touchdown off the board and allowing the Packers another opportunity to kick the field goal. It could have suddenly been 17-14 Steelers, but instead they went into the half 17-10 Packers. They would end up losing by 10 points.

Haden, for his part, is adamant that he didn’t commit a penalty, taking to Twitter after the game for a simple message. “I wasn’t offsides”, he said. Lineman Kevin Dotson also retweeted a Tweet advocating for the same position.

After the game, head coach Mike Tomlin was asked to address the play, and he naturally took a diplomatic stance. “You hear things about what was said on television and all that”, he said. “I didn’t have the line of scrimmage, so I’d just be speculating and giving you some hearsay”.

Those of us who had the opportunity to watch the replays in-game, of course, and are Steelers fans, and don’t risk getting fined by the NFL, likely share a more confident opinion. It certainly looks to me that Haden at least did not move before the long snapper began to shift the ball for the snap.

Frankly, we’ve seen Kameron Canaday flagged for a false start for less, so if what the long snapper did to begin the snapping motion is enough to qualify for a false start, then it should count as movement, after which it is permissible for a defender to advance beyond the line of scrimmage.

Now, would that play have changed the outcome of the game? If you take the simplest possible approach and simply add seven points to the Steelers’ score and subtract three from the Packers’, then you get a 24-24 tie game. But it doesn’t happen that way. The second half would have been a different ball game.

And they still probably would have lost.