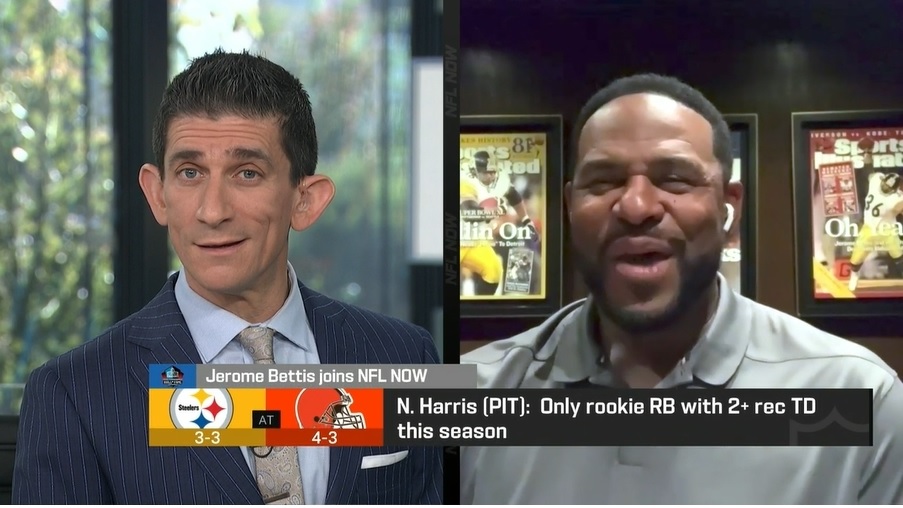 It’s been rumored for awhile but Jerome Bettis and Najee Harris have yet to sit down and watch film together. But when that takes place, Bettis has a couple of things in mind he plans to teach. Bettis joined NFL Network’s Andrew Siciliano to discuss his eventual film study session with Harris.

“I’m just going to tell him to keep doing what he’s doing,” Bettis said. “But add a couple things into his game. I just want to chat with him some of the things in the NFL game that’s a little different than the college game. And give him a crash-course at that 500-level of being a tailback in the NFL.”

Bettis and Harris have met and talked before. On October 14th, Bettis shared an Instagram photo of the two together. Harris commented “we gonna see each other again soon.”

Though they have different body types, both backs were/are regarded as being among the biggest in their era. Bettis is one of football’s greatest power backs, trucking defenders while showing quick feet and a unique ability to change directions. Harris is a taller, leaner type of back with more versatility but has proven his power and strength, as Raiders safety Johnathan Abram found out in Week 2.

Harris has been a sponge during his first several months in the NFL. From the moment he was drafted, players and coaches have praised his work ethic. RBs Coach Eddie Faulkner had to send Harris home in the early going while he’s seemingly done a great job of getting his body conditioned for the heavy workload he’s been handed, sans one cramping incident against the Broncos.

Hopefully Bettis and Harris can get in the film room soon enough, partially so we’re not writing about it time and time again. Harris will be a better, smarter back leaving the meeting than he arrived it and any information from a Hall of Famer like Bettis will give Harris an edge the rest of his career.