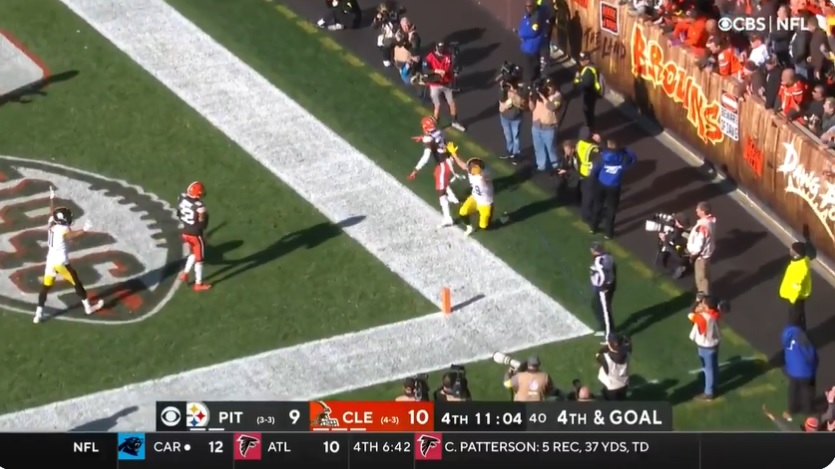 Coming into the start of the 2021 season with four potential starters on offense entering their rookie seasons, it was understandable to be a bit concerned about the Pittsburgh Steelers’ outlook offensively in what could be Ben Roethlisberger’s final season.

Following a Week 8 win in Cleveland against the rival Browns inside FirstEnergy Stadium, there are no concerns moving forward about the rookies overall, as Pat Freiermuth, Najee Harris, Kendrick Green and Dan Moore Jr. all played key roles in the victory and continue to be key pieces for the Steelers’ offense overall.

After the win in Cleveland, Freiermuth was asked by reporters about the impact the four rookies have made offensively, and how they’re able to have such an impact so early in their NFL careers.

The Steelers typically always target Power 5 prospects when it comes to the draft, largely due to that experience in big-time atmospheres. That’s what they went for in the 2021 NFL Draft too, grabbing multi-year starters at Power 5 conferences with every pick, so it shouldn’t be too much of a surprise that the rookies are contributing right away.

Harris remains the bellcow for the Steelers and recorded yet another 100+ total yard game on Sunday against the Browns, rushing for 91 yards and a score and adding another 29 yards through the air. Freiermuth had a spectacular touchdown catch and finished with 44 yards on four catches, while Green and Moore Jr. opened up big lanes in the run game. Moore Jr. really struggled against Myles Garrett in pass protection (who hasn’t?) and Green again struggled with holding penalties, but overall there is no denying the positive impact the four offensive rookies have on the offense.