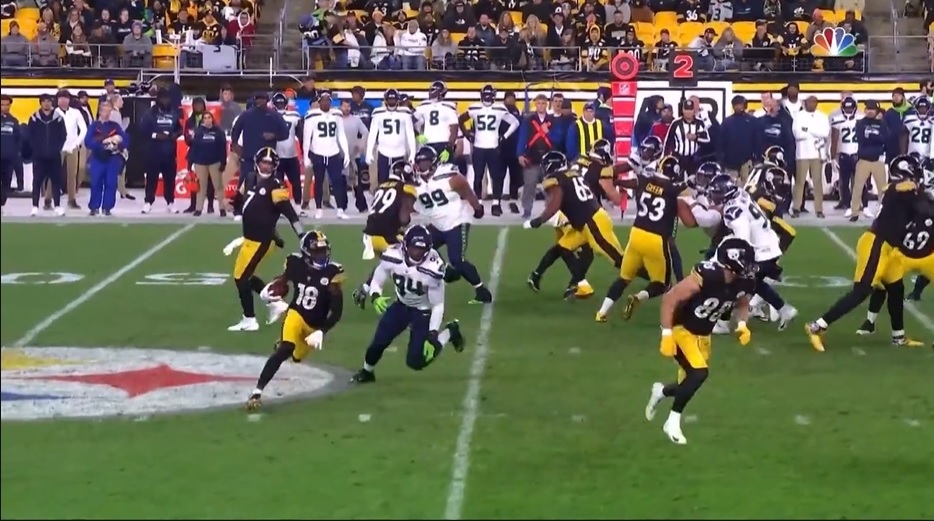 Welcome to the NFL, where all good ideas were someone else’s. And hey, there’s nothing wrong with that. Work smarter, not harder. And the Pittsburgh Steelers did that for their biggest gain from scrimmage Sunday night against Seattle. Diontae Johnson’s 25-yard run, according to Johnson himself, was borrowed from the Los Angeles Rams.

After the game, Johnson talked about his long run.

“We’d seen the Rams run that play against them I think,” Johnson told reporters after the win. “We’d seen they’ve got a certain coverage to it and they gave us the same look. And we were able to make a big play on that one. And I got like 25 yards on it. So that was a good play, we executed that.”

Before we get to what Johnson did, let’s look at what Pittsburgh borrowed. Go back to the Rams’ 2019 game against the Seahawks (shoutout to Dave Bryan for pulling these clips). Three times, they successfully ran this play.

The first came late in the first quarter. The Rams come out in 12 personnel (1 RB, 2 TE) in a tight formation with reduced splits to each side. WR Josh Reynolds (#83) comes in motion across the formation and receives the jet handoff from Jared Goff. Seattle is attacking the run downhill with Goff showing a fake handoff to Todd Gurley, and it opens up the perimeter to the field side. Reynolds follows his blocks and picks up a first down, a 12-yard gain.

The next two examples came in the fourth quarter. 1st and 10 on Seattle’s 36, the Seahawks in a 6-2 front trying to stop the run. Same personnel grouping and pre-snap motion. This time, they run it to the boundary with Robert Woods, who again picks up the first down.

The very next play, the Rams do it again. It’s successful for a third time, Woods again on the carry, outrunning the chasing defensive end as they pick up another first down. Same play, same result. A 10+ yard gain and first down.

Apply that to what Pittsburgh did last night. 2nd and 9 from the Seahawks’ 42. Pittsburgh’s in 22 personnel and running to the field side with Diontae Johnson on the handoff. The playside DE is left unblocked, intentionally, in the hopes the handoff happens quickly enough that he won’t be able to make the play, especially if the DE is crashing down thinking the run is away from him and he’s chasing backside.

The call asks TE Pat Freiermuth to arc block, releasing out into space, and throw a key block on Jamal Adams. 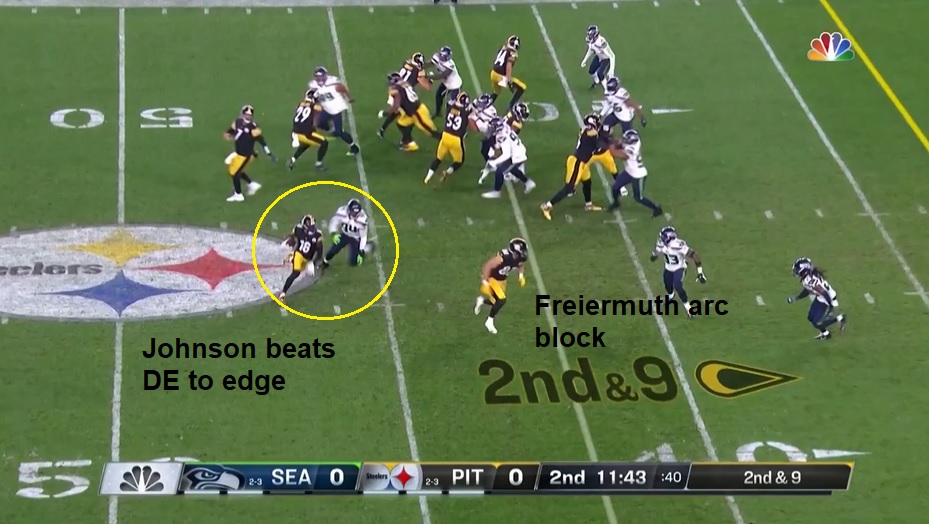 Johnson cuts off Freiermuth’s inside hip and explodes upfield for a 25-yard pickup.

It’s not entirely clear what Johnson is referring to when he says the Steelers got the “coverage” they wanted. This is a similar down/distance as two of the Rams’ clips, an early down (1st and 10 for the Rams, 2nd and 9 for the Steelers) in Seahawks’ territory. So there’s a common thread. Seattle runs a more aggressive, gaps-shooting offense that makes them vulnerable to this sort of misdirection and perimeter runs if they can’t get home right away. So maybe that was what the Steelers had in mind here.

This play isn’t exactly the same as what the Rams did. It’s from a different personnel grouping, Pittsburgh using 22 with the Rams using 12 (the Rams don’t use a fullback in McVay’s offense). The blocking is also a little different. The Rams asked their playside linemen to not block the first level and release into space, whereas Pittsburgh blocked it up front, using only Freiermuth as a lead blocker on the edge.

But this is what a competent coaching staff does. They take ideas from opponents (Seattle had the same DC then as now, Ken Norton, so the 2019 tape is useful) and tweak them to fit what their team is currently running. A seamless way to mesh the current structure of your system, your playbook, your strengths and weaknesses, with a couple new wrinkles you find along the way. And it resulted in the Steelers’ biggest gain Sunday. Three plays later, Najee Harris put the ball in the end zone and got Pittsburgh on the board. Love it when a plan comes together.