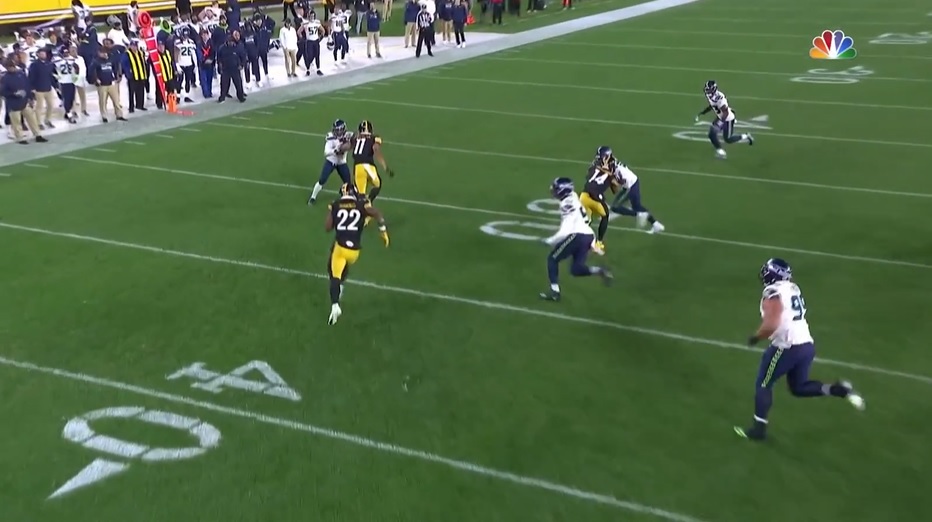 When looking back at the box score of the 23-20 OT win the Steelers pulled off Sunday night against the Seattle Seahawks, one would initially think that WR Chase Claypool had a minimal impact on the game. Claypool finished the night with seven targets in the passing game, but only managed to bring in two of them for 17 yards. For all those who participate in fantasy football, the Seattle Seahawks defense posed an intriguing matchup for Claypool as the unit has been susceptible to giving up points in droves to the RB and WR position, making many believe in the fantasy community that Claypool poised for a big day at the office.

While Claypool may have underwhelmed in the pass catching department, I came away more intrigued with what he did as a blocker Sunday night in primetime. There were a few instances where he stood out on tape as I watched the game real-time, getting some key blocks in the run game to spring runners to the second level to help pick up extra yardage on the ground.

The primary play that comes to mind comes on this second-and-nine attempt at the beginning of the second quarter. Claypool lines up on the left side of the formation in a tight set and locates #2 D.J. Reed on the snap of the football. Claypool engages Reed on the edge, getting a good initial punch and runs his feet on contact, driving Reed backward as #22 Najee Harris runs up the sideline for the successful run.

When watching the All-22 angle of the play, we notice that Claypool could have done a better job of turning Reed’s shoulders to run him to the sideline out of bounds and not allow him to fight off the block to make the play. However, it looks as if Claypool is blocking to get Najee Harris space to run inside, but Harris bounces to the sideline into Reed once he sees defenders coming to the hole. Still some room for improvement, but overall a nice run by Claypool on this play.

Here is one play where Claypool can go back to the film to watch how important his angles are when it comes to blocking. Claypool comes in motion from the left to the right side of the formation, and on the snap is tasked with sealing off #33 Jamal Adams from crashing down the line. Claypool hesitates just slightly on the snap, giving Adams an initial shove but fails to take him out of the play as he bounces off the block attempt and catches Harris from behind, wrapping him up after crossing the LOS for a minimal gain. Claypool needs to show more urgency either to seal off Adams on this play or crack down on him to prevent Adams from getting home.

Later in the second quarter, however, Claypool makes up for the missed block by getting the better of Adams on this run by #29 Kalen Ballage. Claypool again motions from left-to-right, taking a great angle to square up Adams and run him to the sideline. Adams attempts to fall off the block to the left, but Claypool manages to run him out of the play with his arm extended and create a running lane that Ballage hits for a few extra yards before being tackled by #54 Bobby Wagner. Claypool does drop his head on this play which needs to be improved, but he still gets the block to spring Ballage for a successful run.

Overall, it wasn’t a perfect performance from Claypool from a blocking perspective. He needs to work on positioning and engaging defenders with good technique to stay on his blocks and run them out of the play. However, I was encouraged seeing his willingness to do the dirty work in a game where he didn’t do much in the stat sheet, getting some key blocks on the outside for some successful runs while also selling the fake on RPOs, running vertically downfield to take the corner and safety out of the play and commit to the threat he presents as a downfield threat.

Claypool is a long way away from being the blocker Hines Ward became famously known for in Pittsburgh as well as JuJu Smith-Schuster and his contributions made in the blocking department. However, Claypool has the size and physical traits to be a quality blocker from the receiver position which can only help the running game with Najee Harris, being able to run more to the outside if Claypool can consistently handle his man on the edge. The screen game with Diontae Johnson would also benefit from Claypool’s maturation as a blocker, springing the shifty receiver for big plays in space. With JuJu’s future in Pittsburgh uncertain past 2021, Claypool may be the next in-line of physical WRs that can excel as a blocker.

What are your thoughts on Chase Claypool’s performance against the Seattle Seahawks? Do you think that he has the capability to be a high-end blocker at the receiver position moving forward? Please leave your thoughts in the comments section below and thanks again for reading!