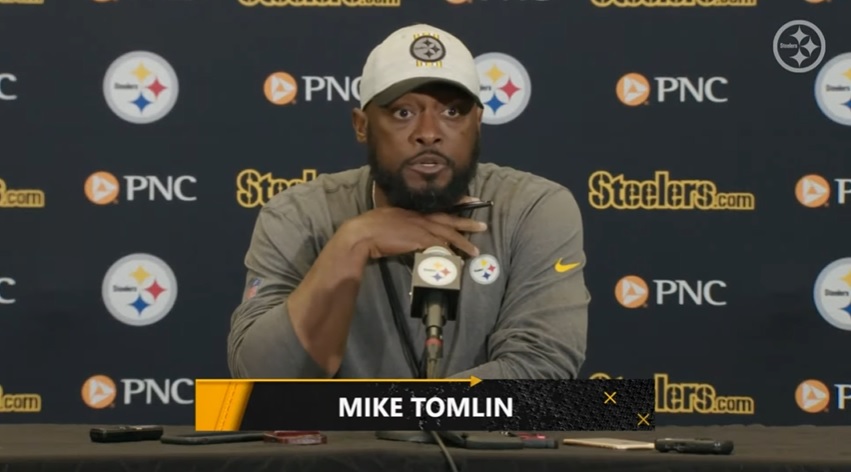 For all intents and purposes, the Mike Tomlin speculation regarding the USC and LSU jobs was about as silly as it gets.

So silly, in fact, that it ultimately led to the veteran head coach and future Hall of Famer getting asked about it at the end of his Tomlin Tuesday press conference. He had to be asked about it to at least put an end to the silliness of it all.

You’ve all seen the clip by now, and if you haven’t: enjoy.

Mike Tomlin puts to bed the college coaching talk about him: #Steelers pic.twitter.com/PuedLcCbBX

The Tomlin rumors for two great college jobs was never really feasible. Why would a Super Bowl winning coach and one that is one a Hall of Fame trajectory at this point all of a sudden leave the NFL by taking a step back to the collegiate level, hitting the recruiting trail and dealing with 18-22 year olds year after year?

He wouldn’t, so it’s fantastic that he came out this strongly and shut down the speculation from the outside.

With that out of the way, ESPN’s Bomani Jones and Domonique Foxworth discussed the press conference from Tomlin on Jones’ podcast The Right Time on Friday. Foxworth, a former NFL cornerback with the Denver Broncos, Atlanta Falcons and Baltimore Ravens, believes there was underlying implications as to why Tomlin’s name was bandied about for the two openings, which is why Tomlin came out so strongly and mentioned New Orleans head coach Sean Payton and Kansas City head coach Andy Reid near the end of his answer.

🎧 @bomani_jones and @foxworth24 on why Steelers coach Mike Tomlin leaving for USC makes little sense in #FoxworthFriday on #TheRightTime.

“I enjoyed it. Like, I mean, Mike Tomlin gives a great press conference either way,” Foxworth said to Jones on the podcast. “So like, I was really interested in what he was saying without saying it. And like, you can put whatever you want in the breach because the coaches that he named were white coaches who are, I mean, I guess in his class, but certainly not better than him. And like, it was Carson Palmer who put it out there and like Mike Tomlin can’t be mad at the reporter for asking it. It’s kind of their job to ask that if it’s out there, like that’s fine, Carson Palmer threw it on the table and is saying that maybe he would go to USC or something like that. And to me, what Carson Palmer was doing is he’s in those rooms and they’re throwing names around in those rooms. And I guess I want to hear all the names, like say all the names, because the reason why it feels uncomfortable is like, normally in this situation, you name coaches who are up and coming college coaches, or maybe failing NFL coaches, those are the type of people, or maybe you steal a talented college coach from one program like James Franklin is a guy that makes sense.

“But you don’t. And I can’t think of any other time where a successful NFL Super Bowl champion coach was having a decent season,” Foxworth added. “Who’s never had a losing season, who there’s no reason to believe would be fired anytime soon, or want to leave. His job was attached to that. And I think that Mike Tomlin is offended because he’s like, ‘what else I got to do? Like for y’all to respect me to think of me in this way?’ And even though he’s never had a losing season, like I remember a couple of years ago, people are like, maybe his message has gotten stale. He’s not the tactician that Bill Belichick is like, he’s a player’s coach, like all types of thorny language that people apply to Mike Tomlin that it feels like they do not apply to other people. So I felt like that’s what he was reacting to.”

It’s hard to try and truly try and pinpoint what Tomlin was implying or trying to say with the Payton and Reid takes, but I think it’s safe to say Foxworth gets pretty darn close here. It’s puzzling that Tomlin — at this point in his career — would somehow be connected to these two jobs from those from outside the organization with no knowledge of what Tomlin is thinking.

The specu-porting (as Alex Kozora brilliantly termed them) came just days after FOX Sports’ Jay Glazer — a close friend of Tomlin’s and one of the top insiders in the NFL — stated that Tomlin wants a veteran quarterback to bridge the gap post-Ben Roethlisberger, rather than rolling with a rookie quarterback.

Knowing that, why would Tomlin all of a sudden backtrack from that and want to potentially take over a program in an area he’s never been, at a level hasn’t coached at in nearly 22 years, and work with young quarterbacks year after year?

It all just made no sense whatsoever.

Jones added onto that, talking all about the job security Tomlin has as a reason why the idea was never even truly feasible.

“The two coaches that he [Tomlin] mentioned were coaches who had won a Super Bowl and had a tenure of a similar length,” Jones said. “Although, you know, Reid’s goes farther back, obviously, you know, with the Eagles days. But I thought that that was the point that he was making is nobody would ever think that those guys would take what is and what he obviously deemed to be a step down. And he’s got the job with the most job security in the NFL. So they talked about him going to USC. Let me look at something right fast. Okay. So since 1969, USC has fired one, two, I think three, four, five, six, seven coaches…seven coaches since 1969. The Steelers haven’t fired a single one.  And look, you can be like, yeah, Chuck Noll won four Super Bowls. He did. But he went out with like four out of five losing seasons and they did not fire him. Bill Cowher had a run there where they got the Super Bowl at one time, but he couldn’t get over that hump and then had three straight seasons where they missed the playoffs. A lot of places you get fired for that, right? Like this has gone as far as it’s going to go. Nope. Bill Cowher kept his job and eventually got to quit on his own terms. I’m supposed to leave that to go recruit? It doesn’t make sense at all.”

It doesn’t make sense at all. It never did when Doug Whaley speculated about it, Ryan Clark added more fuel to the fire, and then Carson Palmer connected his name to the USC job. Could Tomlin eventually go back to the collegiate level later in his career? Maybe. Right now though, or even in the foreseeable future? There’s not a chance that at this point in his career with his resume and reputation he all of a sudden takes a step back, leaves one of the best — if not the best — jobs in the NFL for a college job, no matter how desirable that college job may be.