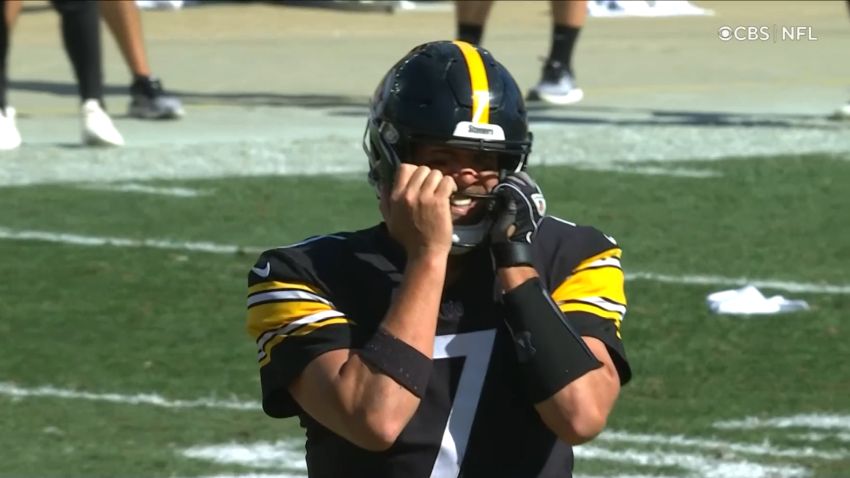 Damien Woody, an ESPN analyst and former NFL offensive lineman with the New England Patriots and New York Jets, believes that’s the case after watching the Pittsburgh Steelers offense struggle mightily early in the  2021 season, especially coming off of a Week 3 performance against the Cincinnati Bengals in which the Steelers threw the football 58 times and put up just 10 points.

Appearing on ESPN’s flagship morning show “Get Up” with Mike Greenberg and Bart Scott, Woody stated he believes Roethlisberger’s time as a starting caliber quarterback in the NFL is at its end. After all, Father Time is (mostly) undefeated (looking at you, Tom Brady).

“I think Big Ben is what we call washed. I do,” Woody said Thursday morning. “I — listen — I could go into a soliloquy about Big Ben’s career and all that. He’s going to be a first-ballot Hall of Famer. But I’m talking about the here and now. Anyone who watches the Pittsburgh Steelers and in particular Big Ben, I mean, he’s like a statue in the pocket. He’s a shell of himself. I don’t even know if he’s a shell of what he used to be, you know, the guy that could move around and throwing people off of him. There is none of that now. He doesn’t push the ball down the field, you know, everything seems like it’s just almost like a checkdown basically. When I look at Big Ben, and Big Ben and the Pittsburgh Steelers, he’s the worst quarterback in that division, and I don’t even think it’s close. He’s the worst quarterback in that division, and if that’s what you’re working with, I just don’t know about the Pittsburgh Steelers.”

It’s hard to truly disagree with anything Woody said here on Get Up, other than maybe the washed part. Yes, Roethlisberger looks like an absolute statue in the pocket, one that appears afraid to take a hit or is uncomfortable with pressure around him. That feels pretty normal at this point for a 39-year-old quarterback that has a perpetually banged-up body thanks to his playing style early in his career. Of course he can’t just shrug people off of him either, as he’s — well — 39 years old. He’s not 33-year-old Ben anymore, who can take all this punishment, extend plays and continue to make highlight reel throws off of said extended plays.

The Steelers need to do a much better job of protecting Roethlisberger in the pocket, and need to do a better job of running the football successfully, taking a load off of Roethlisberger’s shoulders this late in his career. That felt like it was the plan coming into the 2021 season, but through three weeks that hasn’t bene the case as the rebuilt offensive line has really struggled with penalties, an inability to keep Roethlisberger clean and upright, and a woefully inadequate rushing attack.

That leaves nothing to be said about Roethlisberger’s arm or accuracy at this point. Improve those areas in front of him though and this might have a different feel in a few weeks. I wouldn’t say he’s washed, per se, but I do think we’re rapidly approaching the end of a magnificent, first-ballot Hall of Fame career.