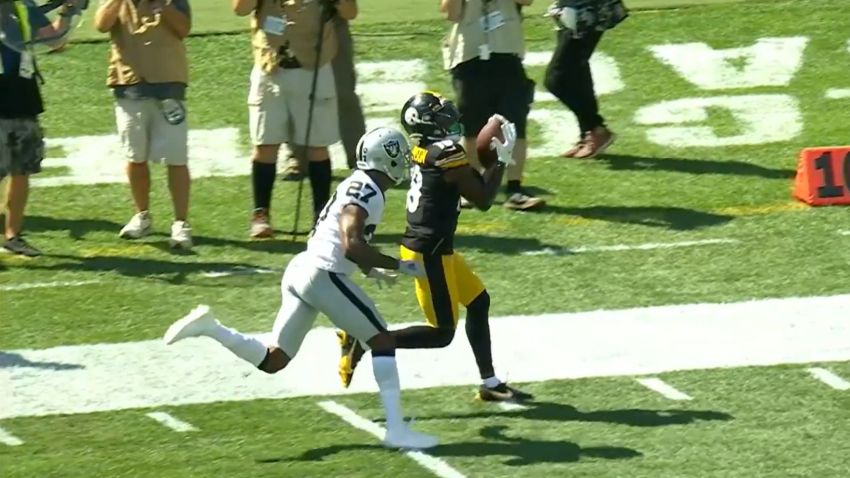 Every day before practice and on most days, after it, Diontae Johnson is catching passes. Working on the side with Pittsburgh Steelers’ coaches, that practice has paid off. Through five games this season, Johnson has been the team’s best receiver and most importantly, yet to drop a pass, an issue that plagued him and this team a year ago. Speaking with Steelers.com’s Missi Matthews, Johnson said the way he ends his warmups has a special meaning.

“Towards the end of the routine, I try to catch 12,” Johnson said. “Because that’s how many drops I had last year. So I keep that in the back of my mind. I got it in my locker on each side.”

Johnson led the league in drops last season. Considering the subjectiveness of drops, the exact number varies a bit depending on who you ask. Johnson has the number at 12 which for him, is about 12 too many. All receivers drop passes over the course of a season but Johnson’s issues were recurring and became a mental block for him down the stretch as the rest of the offense collapsed around him.

Now, Johnson has among the best hands in football, as noted by PFF in a recent tweet.

49 consecutive targets without a drop pic.twitter.com/d5MKeCYkJg

Johnson explained the value of his warmup routine which on the surface, just looks like a game of catch. But it’s something that gets his eyes and hands ready for the day.

“It’s not really a certain amount [of catches in warmups]. It’s just to try and kind of warm up my eyes or whatnot. Just to being able to catch the ball in different positions.”

That’s something Antonio Brown did on the JUGS machine post-practice while a Steeler, catching well over 200 balls from high angles, low angles, behind him, in front, and with one-hand. It made him one of the league’s most sure-handed receivers and as we recently wrote about, the quickest to ever reach 900 career grabs.

Johnson expanded on the “12” note he told Matthews he keeps in his locker room too.

“Just the number. Because that’s the number of drops that I had last year to remind myself. I got a list of goals I want to reach. I pray over them every day. I feel like it’s been shown on Sundays. I don’t have any drops because of my hard work paying off, but then I’m going to continue to do that and lean on the man upstairs.”

His role becomes even more important with JuJu Smith-Schuster sidelined for the rest of the season. Smith-Schuster’s best asset was being a sure-handed, possession receiver. Johnson and the rest of the skill guys will have to pick up that role, especially in those big-time moments on third down and at the end of games.