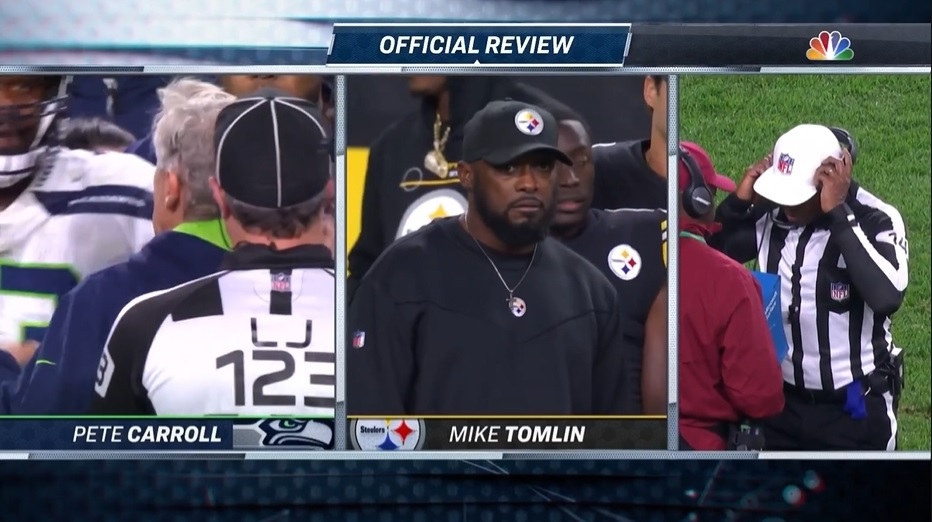 Mike Tomlin still isn’t clear why officials reviewed DK Metcalf’s catch at the end of regulation Sunday night. But he’s said his piece and is moving on. That’s what he told reporters Tuesday afternoon when asked if the league offered any further explanation on what took place.

“The game was stopped by the replay guy to find confirmation of a component of the play on the field,” Tomlin said via this tweet from The Trib”s Chris Adamski. “And I didn’t agree with that in the most significant moment and I expressed it. And I’ve had some conversations with New York regarding it. Got an explanation, I wouldn’t necessarily say I got clarity.”

Down three with no timeouts and 18 seconds left in the fourth quarter, Seahawks’ QB Geno Smith found WR DK Metcalf open along the sidelines. Metcalf attempted to squeeze out a few more yards before ducking out of bounds but CB James Pierre punched the football out into the middle of the field. WR Freddie Swain jumped on the football but with the clock running, Seattle had to scramble to get lined up and spike the football before time expired. They appeared to do so but the refs blew the whistle to review if Metcalf caught the ball. After a lengthy review and discussion, they confirmed the call, made Seattle line up and spike the ball again, before Jason Myers hit the tying field goal to send the game into overtime.

I hated it,” Tomlin said of the sequence. “I can’t believe that game was stopped to confirm catch/no catch in that moment.”

He added that it was an “embarrassment” to see such confusion.

“I’m not going to discuss it any further. It’s in our rear view. It doesn’t benefit me or us in any way to continue to hash it, rehash it. And so that’s my position. Oftentimes after games, particularly hot contested games like that, I acknowledge things that transpired in the bowl, particularly things that I think are significant. But on a Tuesday, as we and everyone else is moving forward, it’s fruitless for me to continue to expand upon it and my position and what was said and who said what and what I expect to happen in reaction to it. So I understand that you guys are interested, but pardon me if I don’t indulge you.”

Soothing things over is the fact Pittsburgh walked away with the victory. Their focus is now on getting back into the thick of the AFC playoff race, clawing back from an ugly-looking 1-3 record to return to .500. Their first game out of the bye week will come against a battered Cleveland Browns team, certain to be a crucial contest for both sides. Hopefully that game can be impacted by the players and not by the refs.

So Tomlin isn’t talking about the play anymore. But we may hear about it one more time, if and when the league hands out a fine for his post-game choice of words.