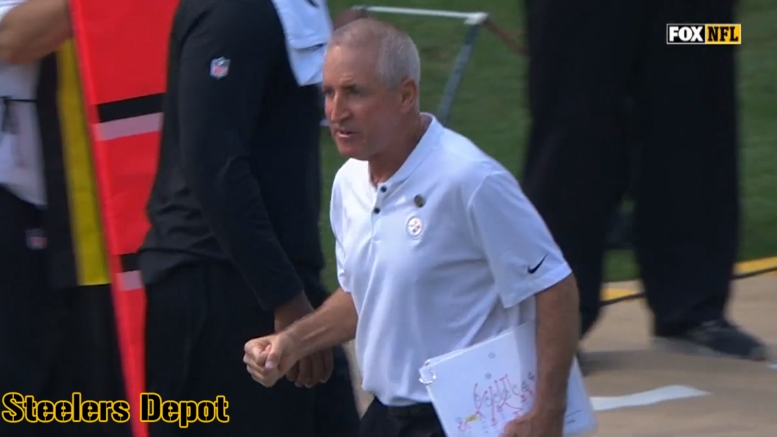 It’s unfortunate that we don’t often get the opportunity any longer to get video interviews with Pittsburgh Steelers special teams coordinator Danny Smith, because I remain convinced that he’s quite mad. Not just because of his Guinness-record-level gum-chewing, but just, you know…in general.

And in the film room. He did speak to reporters on Thursday, and peppered throughout his answers was an obsession with tape study, to the point where his players poke fun at him for it—while quietly embracing and carrying out the madness that ensues.

The Steelers blocked-field-goal-for-a-touchdown-that-wasn’t on Sunday was just the latest example of his exhaustive tape study, how it was produced, and how it was executed by a unit dedicated to carrying out their coach’s plans. And it’s no surprise that the ones who pulled it off were veterans like Joe Haden and Minkah Fitzpatrick, whom he of course insists were all onside.

I picture him chomping maniacally with a youthfully devilish grin peering out through his gums as he says this, stroking his box of gum.

“They’re out there if you study. The players tease me because I’m a film nut”, he said. “I love it. I love watching tape. I love it. If you study it and look at it, you’re gonna find something. And we’ve been able to find some things”.

Still, he ultimately gives the credit to his players not just for executing his plans, but for buying into them. He calls Sundays Players’ Days because they’re the ones who are ‘executing that stuff”. He has a fun group to coach, he told reporters, because “they’re in it. They want more. They’re excited. When you’re having that success, you’re going to get that excitement. It’s fun”.

The Steelers may not have been given the proper credit for the blocked field goal on Sunday, but it is the second block they have gotten this year, and it does wonders for a coach trying to convince players of his ideas when you have successful results to point to. Likely the only reason they have even one win this season is because of the touchdown they got off of a blocked punt. That blocked field goal could have been the catalyst for a second win. And any week could be the next. But you have to plan for it, and then execute that plan. And before that, you’ve got to study like a madman.