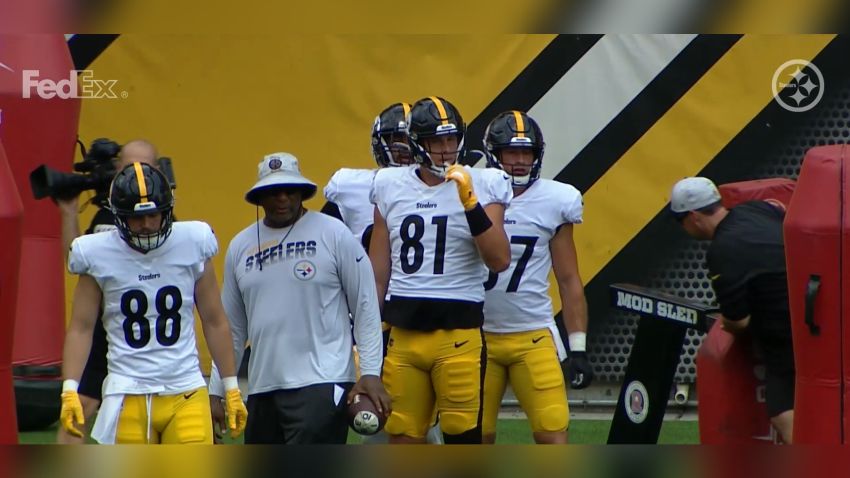 Eric Ebron. Pat Freiermuth. Zach Gentry. To Matt Canada, three distinctly different tight ends in the Pittsburgh Steelers’ locker room. And so far, three guys who have been contributing to the Steelers’ offense. Speaking with reporters Thursday, Canada broke down that group.

“We’ve got three tight ends that really all are a little bit different,” Canada told reporters via a team transcript. “But they all have a very good skill set. [TEs Coach Alfredo Roberts] has done a great job getting them all ready to play. Gentry, I think has had great improvement throughout his time. And he does add some things. He had a nice catch as well. So all three of those guys add a different dimension to us.”

And so far, all three have played a fair amount of snaps. Here’s the snap count/snap percentage for the three tight ends on the Steelers’ 53.

Ebron and Freiermuth have essentially split snaps this season while Gentry has logged more snaps than many have anticipated. It was a question whether or not Gentry would even be active on gamedays this season. He has been and logged a fair amount of snaps as part of the team’s tight end rotation. And as Canada pointed out, caught a ten-yard pass last Sunday against the Packers, the longest reception he’s had since college.

In the passing game, Freiermuth has been the most productive tight end with nine catches for 93 yards and one touchdown. Ebron has just three receptions on nine targets for 27 yards while Gentry has two grabs on the year, that ten yarder last week and a busted TE screen in Week 1.

Going forward, with Ebron’s contract set to void in the offseason, Freiermuth is expected to become the #1 tight end by 2022. Gentry should be back in camp next summer and could stick in that #3 role, though his upside beyond that is unclear and will be based off his continued strides as a blocker.

Pittsburgh will likely have at least one new tight end on its roster for next season. A pure blocking type, something they don’t exactly have on this roster, wouldn’t be a terrible idea for a team who is likely to be even more committed to a strong run game next season.