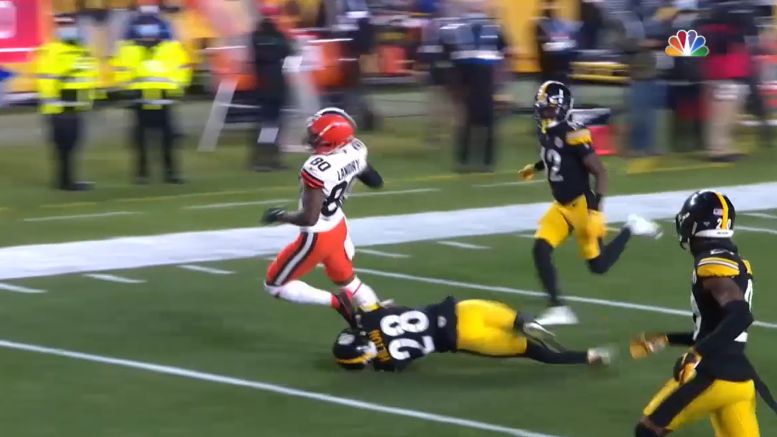 The last time the Pittsburgh Steelers and the Cleveland Browns were on the field together, things didn’t go so great for the defending AFC North champions—who just so happen to be sitting at the bottom of the division at the moment. I can’t even tell you when the last time that had been the case through seven weeks was.

One of the ‘issues’ that were exposed in the Steelers’ defense in that series of games, which was certainly nothing new, was the Browns’ ability to get favorably matchups by using motion to get wide receivers on linebackers in coverage and things of that nature. Even Jarvis Landry versus Mike Hilton in the slot was a mismatch.

Asked on Thursday if he thought that the defense would be better prepared for that on Sunday, Cameron Heyward said, “we’ll see. This’ll be the first time we’ve played them, but I like to think we’ll be in a better matchup. Hopefully we won’t get in a situation like that, and hopefully we learn from our mistakes”.

Having plays in which linebackers end up covering wide receivers, it should be noted, is something that happens in nearly every defense. Sometimes you just have to run the play and hope that the decisions you made that resulted in that matchup pay off, which is usually a blitz or something like that.

Ideally, of course, you will have an audible in place that allows you to bypass that matchup if it doesn’t interfere with the play that you have called—such as forcing your blitzer to instead drop into coverage—but suffice it to say that it doesn’t always work out that way.

It hasn’t been a huge issue for the Steelers so far. DK Metcalf did catch a 12-yard pass against Devin Bush two weeks ago. Davante Adams caught a couple of passes on him for 17 total yards. Tyler Boyd did score against him in Week 3. But for the most part, you really can’t point to it this season and say that it has been a problem.

That doesn’t mean it won’t be, and you can bet that the Browns will try to make it one. Especially given that the Steelers are committed to stopping the run, it may even increase the chances of it happening, quite frankly. But as Heyward said, we’ll see if they can keep themselves out of those disadvantageous matchups—and try to get their offense into some of them, on the flip side.