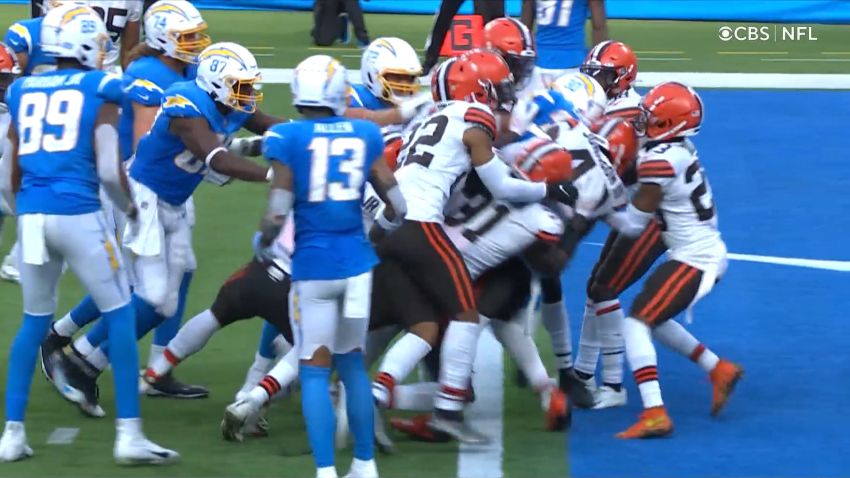 Things went pretty well in the AFC North for the Pittsburgh Steelers. For starters, they, you know, won a game, which hasn’t happened in a while. The Cincinnati Bengals and Cleveland Browns both played in the evening, and they both lost, although they sure put up fights. Neither team has been an easy out by any means this year.

But the long and short of it is the Steelers are now only a game behind them, with the Baltimore Ravens still yet to play tonight, against the Indianapolis Colts, but let’s hope they can make it a clean sweep of losses by AFC North rivals.

I’m sure it’s happened before, perhaps even in the NFL, but the end of the Browns game featured something I’d never seen before: A team literally forcing their opponent to score. Playing through a shootout with the Los Angeles Chargers, the two teams were exchanging touchdowns in the fourth quarter, ultimately six between them, but the final touchdown—the game-winning points it would turn out—came by force.

Trailing 42-41, the Chargers had first and goal at the three with 1:38 to play, Cleveland out of timeouts. Running back Austin Ekeler tried to go down at the one-yard line, but a swarm of Browns defenders quite literally grabbed him and dragged the diminutive back across the goal line to force him to score.

The intention was, of course, to preserve as much clock as possible, which is exactly what the Chargers did not want to do. We have seen players accidentally score when they intended not to, and we have seen defenses very clearly allow an offense to score in these situations, but I personally have never seen a defense literally physically drag a running back into the end zone before.

Fortunately, it didn’t work out for them. Their drive ultimately stalled at their own 46-yard line, Baker Mayfield throwing three consecutive incomplete passes after spiking the ball to stop the clock on first down.

When asked after the game if he felt the heavy analytics approach was where the game was heading, implying that dragging a running back into the end zone is a part of that, head coach Kevin Stefanski said, “the defensive coach in me would say, ‘I hope not’. We’ve got to find ways to get stops”.

It was, of course, a smart play, if you consider the very high degree of probability of a team making a field goal within the three-yard line. The Chargers could have run the clock all the way down to a few seconds and kicked a field goal, which, if good, would have won the game without the Browns getting a chance to possess the ball.

But then you have days like yesterday where you have Mason Crosby, one of the most reliable kickers out there, missing three field goals in the fourth quarter and overtime, which is just…absolutely bonkers.