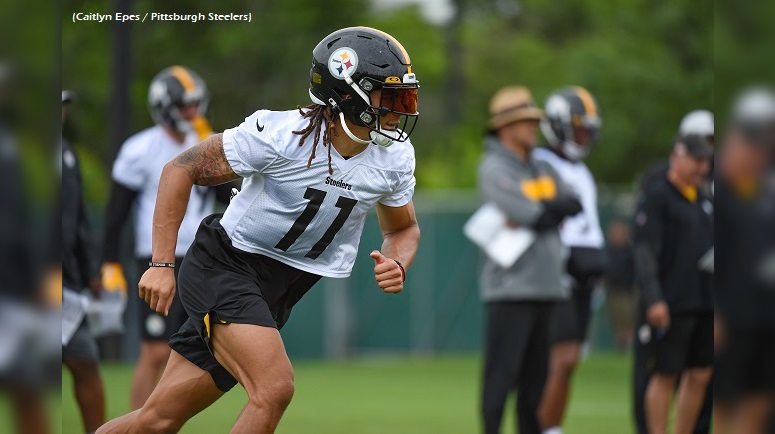 When the Pittsburgh Steelers drafted wide receiver Chase Claypool 49th overall out of Notre Dame in the 2020 NFL Draft, the Steelers were expected to add a height, weight, speed guy at the position to compliment a terrific trio already in place.

Instead, what the Steelers have done is potently find their next true top wide receiver to build around into the future.

That argument can certainly be made for Diontae Johnson as well, but as of late that discussion has centered around the 6-foot-4, 238-pound wide receiver with 4.4 speed and off-the-charts athleticism.

Bleacher Report’s Brent Sobelski added some context to the WR1 discussion, labeling Claypool as the Steelers’ most promising 25 and under player on the roster, which also features the likes of Johnson, rookie running back Najee Harris, inside linebacker Devin Bush, and safety Minkah Fitzpatrick.

“The Pittsburgh Steelers’ Chase Claypool isn’t built like other wide receivers,” Sobelski writes. “Claypool’s size, length and speed make him an instant mismatch, particularly as a deep threat and red-zone target. During his rookie campaign, the 2020 second-round draft pick led all rookies with nine touchdown receptions. Issues with Ben Roethlisberger’s decline and the Steelers offense haven’t helped the second-year receiver, but he still leads Pittsburgh with 341 receiving yards. Once the organization transitions away from the future Hall of Fame quarterback, it already has a true WR1 in place for the team’s next starter.”

Claypool is certainly a deep threat and a true red-zone target, but the Steelers seem to still continue to misuse him as he’s not a burner that will separate deep, and doesn’t win enough contested-catch situations to get as many looks as he does down the field.

However, he is a rare blend of size, strength and speed and is certainly a mismatch wherever he lines up on the field. Should he continue to develop as a route runner and start to clean up some of his struggles in contested-catch situations, he will certainly elevate into that WR1 role that Sobelski projects him to be.