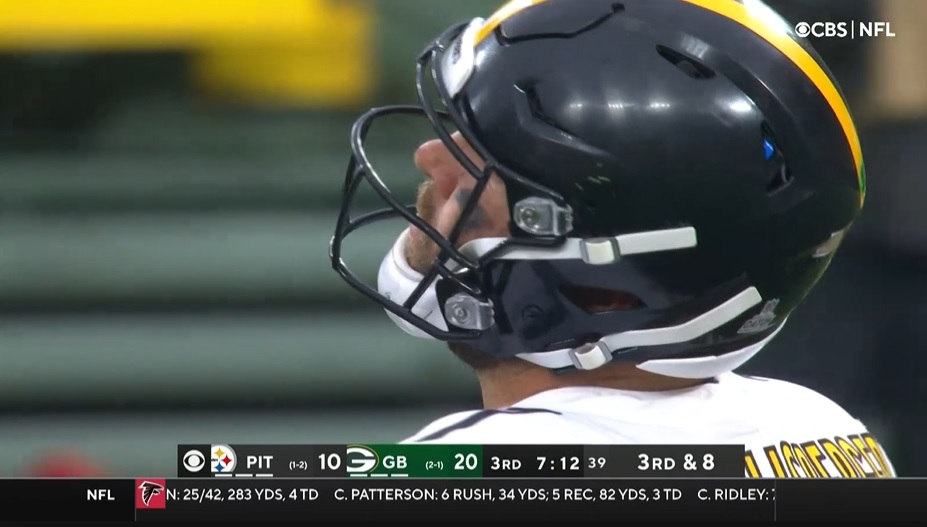 On paper, Ben Roethlisberger’s 65% completion rate, 26 of 40, doesn’t look bad. It’s right in line with a good number by an y starting quarterback. But watching the game and looking at a box score are two totally different things. Roethlisberger was not accurate in Sunday’s loss to the Packers and it’s a major reason why the Steelers’ offense continues to stall.

Speaking to reporters after the game, Roethlisberger explained the reasons for his inaccuracy.

“For me personally, it’s making those throws,” he said of his key misses Sunday. “I missed a couple of throws tonight. I was dropping my elbow down. And when you drop your elbow, the ball isn’t as accurate. So that’s just on me to make the better throw. So we had some plays, we had some guys open on the sidelines early.”

Those missed plays, two incompletions to JuJu Smith-Schuster, were difference-makers in the game. The first came mid-way through the second quarter, Roethlisberger’s throw slightly high and over Smith-Schuster’s head. What should’ve been a 32-yard TD turned into an incompletion and field goal, keeping the Packers lead instead of the Steelers tying things up.

The second came a quarter later, a missed connection for what would’ve been at least a 30 yard completion and a touchdown if Smith-Schuster had broken a tackle or run away from the corner defending him. That pass also just missed and two plays later, Pressley Harvin booted an ugly 20 yard punt. Green Bay found the end zone, going up 27-10.

But those were far from the only two of Roethlisberger’s misses. There were several others. Some related to pressure, some not, but Roethlisberger made a reference to the Packers’ rush.

“Probably throwing the ball a little faster than I want to at times. But at the end of the day, you have to make throws.”

The Packers’ defense recorded 5 QB hits and sacked Roethlisberger twice, including forcing a fumble recovered by Green Bay. Better numbers than past weeks but still far from great and the fumble was a killer. Nothing is going right for the Steelers’ offense right now, even when they have the chance.