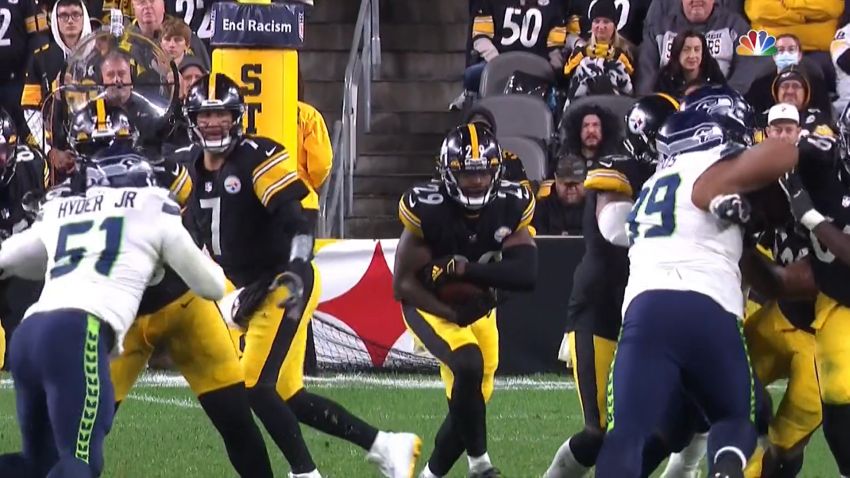 The Pittsburgh Steelers did not have their greatest night of running the ball, but for the most part, it got the job done, and in particular, the ground game improved throughout the game, particularly in the fourth quarter, during which they were able to generate some rhythm, even with Kalen Ballage getting involved to supplement Najee Harris.

The Steelers did throw the ball more than they ran it, 40 to 28, but that was largely driven by game circumstances. Yet, as quarterback Ben Roethlisberger points out, they worked with what they were given by the defense, using the run-pass option to choose when to run the ball.

“Once again, all of those were RPOs, and when they’re giving it to us, we’ve got to just kind of keep going”, he said after the game. “KB coming in running a couple times hard. It was encouraging to see towards the end of that game when you really need it, you can pick up 5, 6, 7, 8, 9, 10”.

As mentioned, the fourth quarter was where the run game really picked up. The Seahawks had just tied the game before Harris and then Ballage both ripped of runs of 10 and 11 yards, respectively. Unfortunately, Roethlisberger was ruled to have fumbled on the next play, recovered by Seattle, but the defense was able to force them to punt.

And the run game picked back up—two drives later, anyway. On four straight carries, Harris ran for nine yards, then 3 for the first down, 10, then 5, down to the two-minute warning. Roethlisberger looked for Chase Claypool on the ensuing 2nd-and-5 play, but he couldn’t come down with it, and drew an offensive pass interference penalty that screwed up their momentum. They still salvaged a go-ahead field goal, however.

While the run game could have been better overall, the late-game, fourth-quarter success was encouraging, and that is positive signs from this element of the offense three weeks in a row now. They did rush for over 100 as a team, with Harris picking up 81 on 24 carries. You can see the work. But there’s still work to be done.

The good news is that they now head into the bye week with the opportunity to reflect on where they are and where they must go, including deeper considerations of how to fill the gap left by JuJu Smith-Schuster, who is out for the rest of the year. Getting a chance to rest isn’t anything to complain about, either.