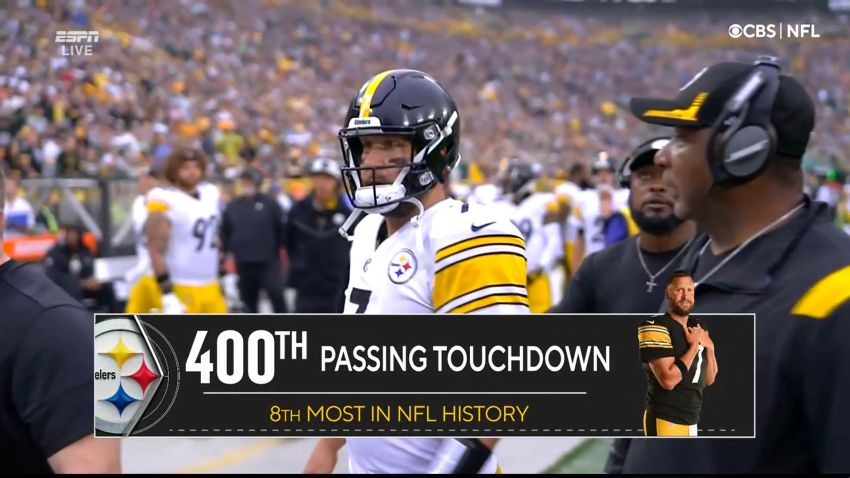 The Pittsburgh Steelers offense has not been good for a while now. We have recapped their first-quarter ineptitude for a while now. Yet today, they came into Green Bay and went down the field for a first-possession touchdown, culminating in a historic play marking the 400th touchdown of quarterback Ben Roethlisberger’s career.

While the moment is of historical importance, it was a much-needed fast start for a Steelers team that is not only reeling from two straight losses, but that has been lacking any sort of momentum on offense for most of the season.

The play came on 3rd and 4 from the Packers’ 45-yard line following a couple of first downs by running back Najee Harris. Able to draw the defense into a false start, Roethlisberger knew that he had a free play, tossing the deep ball over the top to wide receiver Diontae Johnson, catching his second touchdown of the season, after missing last week with a knee injury.

It marks the first deep touchdown pass for Roethlisberger of the season. Of his first three, two were within five yards of the end zone. He threw a 25-yard touchdown pass to Harris, but that was a catch-and-run effort from the rookie back.

Of course, Roethlisberger’s deep ball—not necessarily his arm strength, but rather his accuracy and timing—has been a major subject in Pittsburgh for the past couple of years. The one play is not going to suddenly silence the doubts, but it was still important to see for the season, and an impressive way to reach a landmark.

And it will probably be one of the final landmarks Roethlisberger reaches in his career, with almost everybody anticipating that this will be his final season. He’s certainly not going to reach 500 touchdowns, something that only the first four players on the list above have achieved.

Now that he has his 400th touchdown under his belt, of course, it’s time to go out and win a game, against a good team on the road. Chances are he’ll need another touchdown or two to have much hope of locking that in.