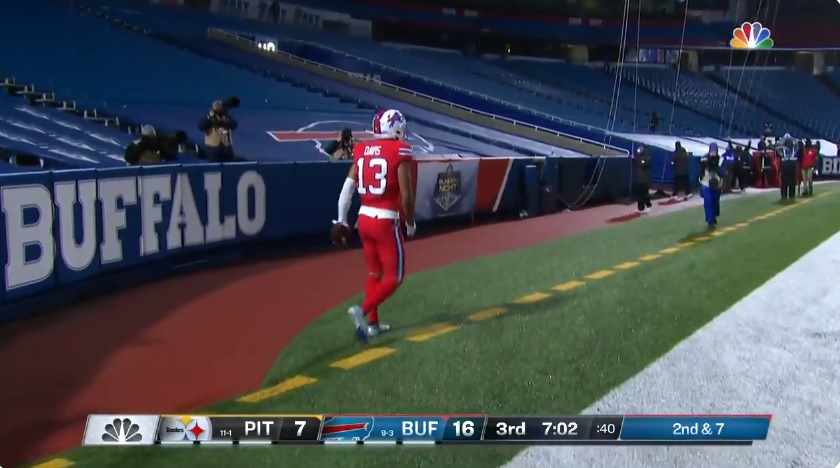 (Ed Note: This article was written prior to the Ahkello Witherspoon trade)

With the start of the regular season almost upon us, I wanted to break down certain aspects of the game that could become key points that could potentially tip the scales one way or another in favor for either the Pittsburgh Steelers or their Week 1 opponent, the Buffalo Bills. We recently saw the potency of the Buffalo Passing attack in the Bills’ preseason win against the Green Bay Packers where QB Josh Allen tore apart the opposing secondary in limited action, completing 20-26 pass attempts for 194 passing yard and two touchdowns.

My friend and fellow Steelers Depot contributor Westley Cantliffe has a film room on the way about the possible issues the Pittsburgh defense may have containing Pro Bowl WR Stefon Diggs who lead the NFL in receiving yards last season. Given how the Buffalo offense runs through Allen’s powerful right arm and the number of passing game options at their disposal, it can be assumed that Pittsburgh’s revamped secondary is going to be challenged right out of the gate.

Let’s go back down memory lane to get an idea of what Pittsburgh is heading into next Sunday. The Bills won the Sunday night showdown last year by a score of 26-15 against Pittsburgh. The Bills amassed 334 yards of total offense in the Week 14 victory, rushing 27 times for 104 yards (3.9 YPC) along with completing 24-of-43 pass attempts for 230 yards and two scores along with an interception made by Mike Hilton. However, many Steelers fans will remember the pick-six thrown by Ben Roethlisberger to Taron Johnson who took it up the sideline and seemingly took the wind out of the sails of the Steelers offense.

Stefon Diggs had his ways against the Pittsburgh defense, notching ten receptions on 14 targets for 130 receiving yards and a touchdown. Slot receiver Cole Beasley also had a solid performance hauling in five receptions on ten targets for 41 yards. TE Dowson Knox added 34 receiving yards to the mix, and Isiah McKenzie threw in another 12 yards. Gabriel Davis was on the receiving end of the other passing touchdown from Josh Allen, totaling 19 yards on three catches. Overall, it was the team’s sixth-worst performance during the regular season in terms of passing yards allowed.

After going back and watching the game, it was clear that Pittsburgh didn’t have the defensive scheme to contain the Bills passing attack. The defense contained them at the start of the game, getting good pressure on Allen in the pocket. However, much like they have done in the past, the team would opt to keep its personnel on the field in empty formations, putting linebackers on slot receivers. Having Vince Williams or Avery Williamson try and cover Cole Beasley in open space is a recipe for disaster.

Diggs had his way in coverage when matched up against #22 Steven Nelson on the boundary. He really excelled in the in-braking routes to the middle of the field as well as the comeback, getting Nelson to play conservative in coverage, thus allowing Diggs to get easy separation out of his routes for easy completions past the line to gain to move the sticks.

Along with playing conservative on coverage, there were instances of being in the wrong spot in coverage, specifically on the touchdowns to Diggs and Gabriel Davis. On the Diggs touchdown, Nelson slipped and fell to the turf for the easy completion. On the Davis score, Nelson got preoccupied by the receiver running the underneath route to the sideline, failing to carry Diggs up the sideline and into the end zone.

Zone coverage was just as bad when trying to contain the Bills passing attack. There was clear miscommunication on the backend as receivers routinely got behind the first line of coverage in the box with no defender picking them up, making it easy for Josh Allen to pick apart the defense with receivers sitting in the holes of zones for completions to move the offense down the field and into scoring range.

On this touchdown to #13 Gabriel Davis in the back of the end zone, we see Nelson pick him up initially after the ball is snapped but stops running with him into the end zone as Cole Beasley breaks to the sideline, placing himself in no-man’s-land in-between the two receivers. #39 Minkah Fitzpatrick tires to close ground to contest the pass, but Davis makes the toe-tap catch for the score before he can get there to contest the pass. While I understand why Nelson got caught where he did, he should carry Davis up the sideline and worry more about the touchdown versus the first down.

Overall, I came away thinking that the Bills’ passing attack is definitely a major threat heading into the Week 1 matchup, but a large portion of the big plays the Steelers gave up last season were self-inflicted mistakes.  Lapses in coverage, communication issues, and a lack of aggressiveness giving up the short passes rather than playing the football really hurt the team as a whole. Steven Nelson was exposed in this game, and it’s fair to question whether or not James Pierre can do any better However, Pierre is more physical at the catch point from what we have seen thus far, thus hopefully contesting more of the short passes. We still should expect Pierre to lose on the in-braking routes, especially if facing Diggs.

Another factor that has to be considered is the fact that Joe Haden didn’t play in the 2020 game due to being on the COVID reserve list. His presence should help shore up the secondary as a whole with Pierre on the opposite side and Sutton in the slot at the nickel. What will be interesting to see is if Pittsburgh elects to roll out either Karl Joseph or Arthur Maulet if healthy in the dime against four receiver sets or will elect to be stubborn like they have been known for and force either Joe Schobert or Devin Bush to cover in the slot against wide receivers while detached from the line of scrimmage.

While I will acknowledge that defensing the Buffalo passing attack will be a difficult task, I do feel as if Pittsburgh has the pieces to at least contain them and prevent the big play. They have a great defensive front that will be able to pressure Josh Allen and force him to throw quicker than he may like. However, it comes down to scheme in coverage and overall execution by the defenders tasked with that coverage to make the game plan successful. Should they choose to bracket cover Diggs and not line up a linebacker on Beasley in the slot, Pittsburgh may have a shot at containing the Bills passing attack just enough to prevent them from breaking the game wide open.

What are your thoughts on the Week 1 matchup against the Buffalo Bills? Do you think the defense has the guys to adequately cover their weapons in the passing game? Or do you believe Josh Allen, Stefon Diggs and company will have their way with the defense? Please leave your thoughts in the comments section below and thanks again for reading!