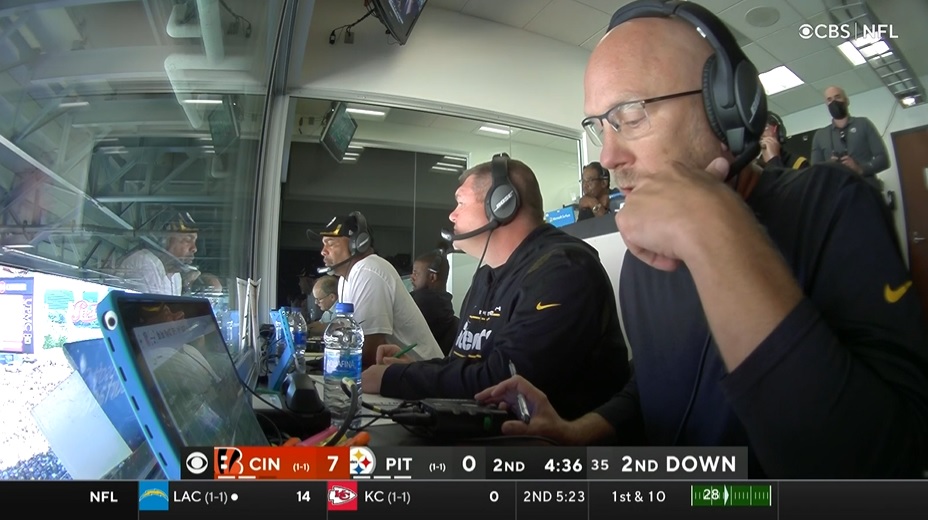 It’s not often we get a look inside the Pittsburgh Steelers’ booth. The guys who are tucked away upstairs watching the game, away the core of the coaching staff – like Mike Tomlin, for example. But we got a look at it during Sunday’s game against the Cincinnati Bengals when the CBS crew cut to a shot of the team’s booth.

You can see it in the headline photo but I’ll share it again below.

So who are all these guys? Let’s map it out.

The most obvious name, and the reason why the production crew cut upstairs was for Matt Canada. He’s the closest to the screen (wearing glasses). Canada has elected to work from the booth this year, a rarity for Steelers’ OCs but something he’s used to doing. QBs coach Mike Sullivan serves as the liaison between Canada and Ben Roethlisberger and Roethlisberger, of course, can and does talk on the phone with Canada.

To Morgan’s right (our left) is senior assistant Teryl Austin (white shirt). Austin was brought in to help Tomlin make challenge decisions but his role has seemed to evolve to something of a de facto DBs coach. He likely pulls double-duty from upstairs and the fact he’s up in the booth is the reason why the team needs to hire another DBs coach so someone can be on the sideline with these guys. That’s Grady Brown, hired this year.

To Austin’s right is assistant outside linebackers coach Denzel Martin. He’s a little hard to see, leaning back in his chair in the black shirt. He began as a scouting intern, meeting Tomlin at a Missouri Pro Day when Martin worked for the Tigers and has worked his way up the ladder. He works closely with DL coach Karl Dunbar, who spends a lot of time coaching the outside linebackers since they’re pass rushers/de facto defensive linemen.

To Martin’s right down in the corner is GM Kevin Colbert. He’s one of the most well-travelled GMs in football on the scouting trail and I don’t know if he’s there for every single game (though I suspect he’s there for most) but he was there for the Bengals game.

So those are the bottom five: Canada, Morgan, Austin, Martin, and Colbert.

On the second level behind them are three more faces. To the far right is area scout Dan Colbert (grey shirt). Sort of interesting for a college scout to be there, but maybe he’s another set of eyes for the game.

On the far right of the second level is assistant head coach John Mitchell. The long-time, highly successful defensive line coach, he’s served as an assistant for several seasons. The only person I can’t be certain of is the man in the middle. His face is obscured in the still shot I’ve shared, but you can see it a moment later in the video. I believe it’s assistant Matt Tomsho, who has been Canada’s right-hand man at several stops along the way in college. But I’m not positive.

One last look at the photo with each person labeled with my sick Microsoft Paint skills. 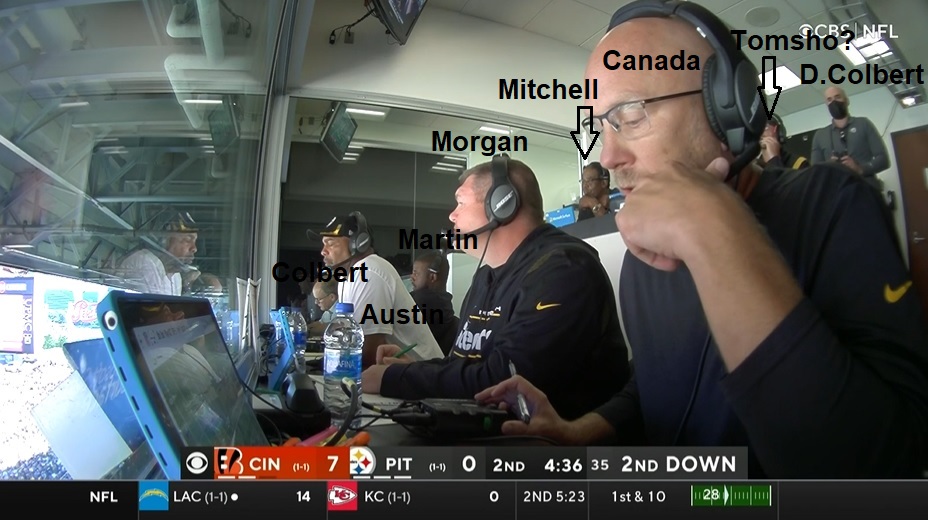 What does this all mean? Eh, not much. But we’re nothing if not thorough around these parts. And it was cool to get this look and lens we don’t often see. So I wanted to take a pause on the ugliness of the season and nerd out about this a little bit.