Today I wanted to discuss a topic that I have been contemplating this offseason. The narrative from many people is that the Pittsburgh Steelers throw too many short passes, and my goal today is to dive into that by visualizing what 2020 looked like against a quarterback that has a reputation of throwing deeper passes in Josh Allen of the Buffalo Bills. Another benefit in comparing Roethlisberger and Allen for this article is that the Bills are Pittsburgh’s Week 1 opponent. With this in mind, let’s take a look at this graph: 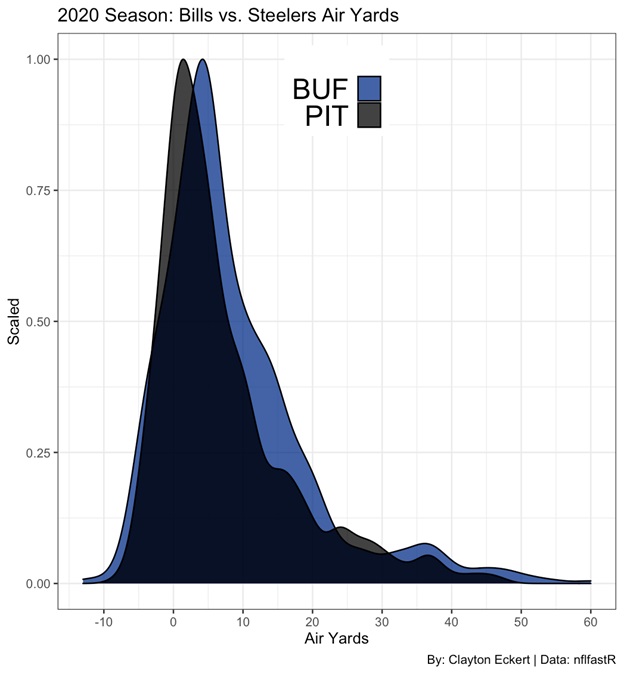 The first thing that jumps out right away is that both Roethlisberger and Allen threw the majority of their passes in the short range. This is one of the main points I was hoping to make, the short passing game is an important and common part to a well-balanced offense. Key words are well balanced in my opinion, and that is where Buffalo and Allen excel. The 10-20 yard range is where we see Josh Allen separate himself the most on the graph. I am optimistic and hopeful with Matt Canada as the offensive coordinator that he can help manufacture some of this balance, and Roethlisberger’s arm being fresher and more recovered from his injury, that we could see more balance in the 10-20 yard range this season.

These are the types of successful plays that the Steelers lacked in 2020, and if improved upon will provide a much less predictable and more successful offense compared to the end of last season. With Najee Harris in the backfield, defenses will likely be accounting for him more, especially if we continue to see play-action incorporated as we have in the preseason. I am also hoping that we continue to see the balance of motions and shotgun/under center looks that we have seen with Matt Canada. The more variety the defense has to account for, the better.

Another takeaway is that when Ben Roethlisberger did throw the ball down the field (20-plus yards), it was most frequent in the 25-30 yard range. While I would love for Ben to match Josh Allen’s 30+ yard results, that frequency is not a necessity for this offense to be successful in my opinion. This would also mean that he would be holding the ball longer, which makes me nervous in regard to the offensive line having to maintain their blocks longer and risking more hits on Roethlisberger. This is another reason I agree with Dave Bryan’s point on seeing more throws in the 10-15 yard range, where the Bills and Allen have much more frequency than the Steelers.

Ben Roethlisberger only played in the Lions game this preseason and the snaps were limited, but thanks to Tom Mead’s offensive charting I wanted to see what Roethlisberger’s results were in those limited snaps. The table includes Pass #, C/I (Complete or Incomplete pass), AY (Air Yards), YAC (Yards After Catch), Receiver, and Result:

While this is a small sample size, we definitely saw encouraging things that will hopefully carry over into the season overall. Seven of Roethlisberger’s ten passes were successful, two of which were explosive and two more that were touchdowns to Pat Freiermuth. The long pass to Diontae Johnson (PASS #4) was an encouraging play to see as far as aggressiveness, but I am very interested to see what type of zip and accuracy he has on these opportunities as the season unfolds since this pass was a floater that had a chance of being intercepted.

The second explosive play was a great short catch and run by Najee Harris that got the Steelers into the red zone, setting up Freiermuth’s second touchdown a few plays later. This play by Harris helps me reiterate the point I made earlier, if there is more balance and more of a threat that the offense can throw to all areas of the field, it makes it more difficult for the opposition to defend and can open up what happens in all aspects of the game for the offense.

Do you think the Steelers passing game will excel in 2021? What will Ben Roethlisberger’s air yards look like this season? Will there be more of a balance in his air yards compared to 2020? Thanks for reading and let me know your thoughts in the comments!