The first week of NFL football is in the books, and I wanted to provide some data from what transpired and pose some questions to you the readers. It is only one week, but I was curious to see what some of passing stats looked like nonetheless. With that in mind, here is a visual of the following datapoints from Pro Football Reference: 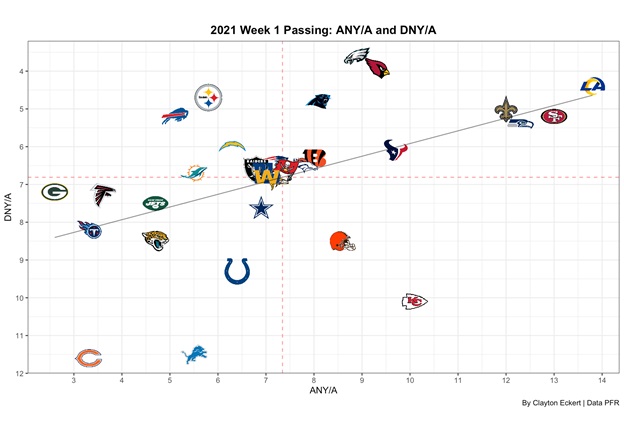 Right away we can see a very encouraging takeaway on the top left of the graph. The Pittsburgh Steelers ranked fourth in the DNY/A stat and were able to keep the Bills offense in check, holding them to a low ANY/A number of 5.1 which ranked 26th for week one! The Steelers pass rush came up huge and the secondary played strong overall in my opinion, the rush and coverage definitely played well off of each other and I’m very optimistic that we will see this continue!

I also found it interesting how close the two teams landed on the graph, confirming what we saw from the game (defense > offense) and I’m very curious to see what the trends look like for Pittsburgh as we continue to get more of a sample size through the season. The Steelers ranked 23rd in ANY/A against the Bills defense, who tied for the seventh best DNY/A along with the 49ers. How do you think the Steelers will fare in the passing game on both sides of the ball through the season?

While it’s not a groundbreaking takeaway with this small of a sample size, I also wanted to take an AFC North view for a second and clarify where the teams landed on the center of the graph.

How do you think these rankings will play out during the season?

I also wanted to provide a table of the datapoints from the graph to get the raw numbers with rankings (dark blue is best):

I really enjoy the table view here, and as the sample size increases we should be able to find out a ton about the teams. The ANY/A stat is one of Dave Bryan’s favorites, and it is hard to argue when you look at the ANY/A column and compare it to the outcomes of the game. Looking at the top 16 rankings, 12 of those teams won the game (75%-win rate)! I was curious to also see how well the DNY/A stat fared, and 14 of the top 16 teams won the game (88%-win rate)! This is one of the many takeaways that I really enjoyed when gathering this information and can’t wait to track it through the season!

Lastly, I wanted to take a look at the Las Vegas Raiders for Sunday’s matchup. In their overtime win against the Baltimore Ravens on Monday night, they ranked 20th in ANY/A and 16th in DNY/A. While neither ranking jumps out as overly impressive from the game, the opponent should never be taken lightly. Darren Waller should be the primary focus for the Steelers defense in the receiving game, and Hunter Renfrow was the second most targeted player for Las Vegas. Will the Steelers defense be able to keep the Raiders passing game in check? Do you see there being a primary defender or a committee approach on Waller?

In terms of the Raiders defense, Maxx Crosby led the league in week one with 13 pressures barely edging out Cameron Heyward with 12 pressures. Casey Heyward Jr. was the top coverage player according to Pro Football Focus and was the only defender that was targeted without allowing a reception on the team. How do you think the Steelers passing game will do against the Raiders defense? Las Vegas does have a longer injury report than the Steelers as of Wednesday, and mostly on the defensive side of the ball. It will be very interesting to monitor who will play and how they will perform in the matchup on Sunday.