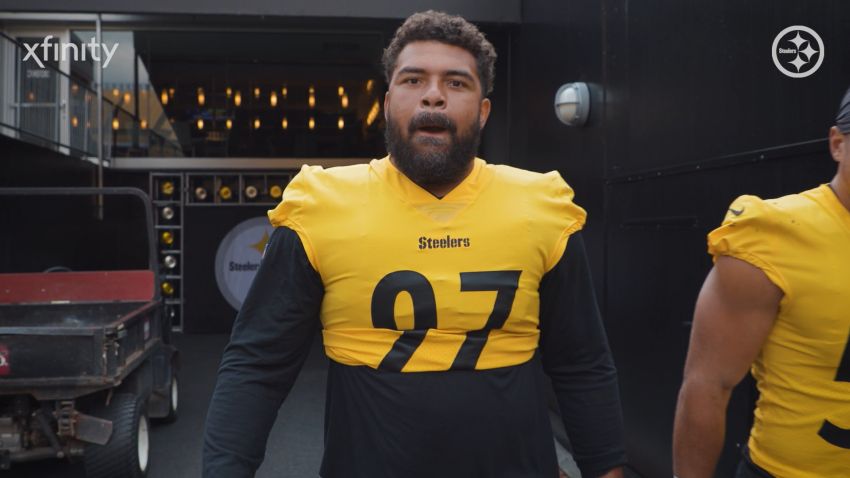 Tyson Alualu and Cam Heyward may be the elder statesman of the Pittsburgh Steelers’ defensive line room. But they sure don’t play like a couple of dudes in their 30s with 10+ years in the league. Somehow, both guys have seemed to get better in their uh, advanced age. And Alualu can’t help but marvel at what Heyward’s been able to do. Especially when it comes to the power he so regularly displays.

“I haven’t seen anybody we face stop his bull rush,” Alualu told reporters via Steelers.com Wednesday when asked about it. “I think that’s a hundred percent.”

The Bills sure didn’t know how. Or specifically, veteran left guard Jon Feliciano who was bullied by Heyward’s bull all game long. A couple of clips we’ve tweeted out in the past few days.

Bull rushing the left guard so bad the only thing he can do is trip you (which wasn’t called, if you’re wondering).

Not many defensive lineman can make guards look as bad as Cam Heyward can. #Steelers pic.twitter.com/qIE3ghulXl

And this one, ouch. Literally and figuratively.

This left guard's set is all over the place and he's 100% off balanced. But Cam Heyward is taking the phrase "put him in the QBs lap" to a literal level. #Steelers pic.twitter.com/RGnV9AZ99c

Those are just two of the best examples. There’s half-a-dozen more from this game alone. The bull rush certainly isn’t anything new for Heyward. He’s been doing it for years. Leverage, strength, power, and finish. Many guards have been deposited in quarterback’s laps because of it. Heyward’s up to 59 career sacks. One more will make him just the third defensive lineman in team history with 60, joining Joe Greene and L.C. Greenwood.

Alualu praised Heyward’s work ethic and approach to the game.

Heyward helped lead the way in Sunday’s win over Buffalo, finishing the day with a sack, tackle for loss, and two pass deflections. He’ll try to keep things going in the team’s home opener against the Raiders versus an interior offensive line dealing with injury. Starter Denzelle Goode suffered a season-ending ACL tear in Monday’s game against Baltimore while veteran Richie Incognito is dealing with a calf injury that caused him to miss Week 1. It’s unclear if he’ll suit up against the Steelers.