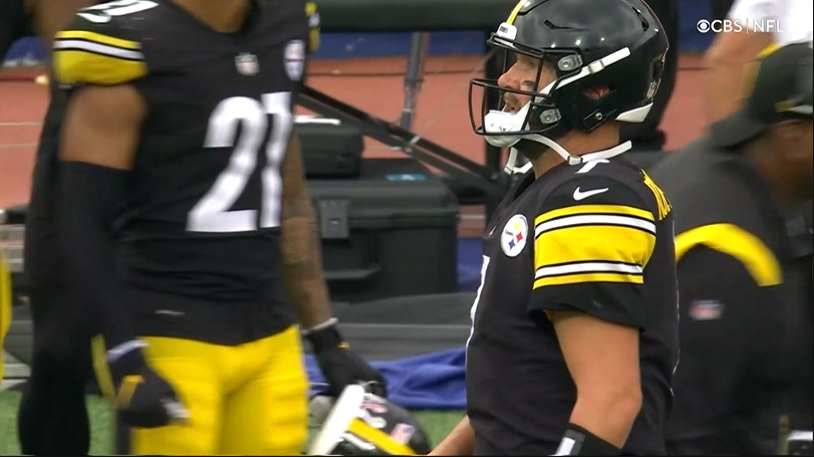 1. And That’s Why They Play the Game – The vast majority of pundits and prognosticators had the Bills winning this game. I included. On paper, a phrase that is used as often as it is proven wrong, the Bills were the better team. And for 2 plus quarters they were.  The Steeler played bend-don’t-break defense forcing some field goals.  The defense had several stars in this game, they got a special team touchdown and Diontae Johnson made a nice juggling catch in the corner of the end zone.  This team has a very tough schedule and this was huge win that could possibly affect things like playoff seeding down the road.

2. Hi, My Name is Melvin – The stat sheet doesn’t always show how effective a player can be. Melvin Ingram introduced himself to the Steelers fans today and it was a wonderful introduction. Credited with a tackle for a loss, a pass break up and a quarterback hit doesn’t show his level of disruption. He was drawing holding calls, spent a lot of time moving the quarterback off his spot and set the edge well to redirect runners.  Having the third quality outside linebacker is showing its benefits early.

3. Poor Passing Performance – I’m not trying to bash Ben Roethlisberger here but at this point in his career there are limitations. Someone of his experience should be able to complete short area pass accurately but so often he tries to do it quickly with his feet out of position and is severely hampers his accuracy. Too many misses on short passes. And while the deep ball has better accuracy it seems like more of a prayer for a defensive penalty. He great when he hitches and sets his feet but off rhythm throws are not his forte.

4. Heyward and Company – The defensive line was up to the challenge today against one of the better quarterbacks in the league. Cam Heyward led the way filling the stat sheet including knocking down two passes, had a fumble recovery and a sack. Tyson Alualu had five tackles and a QB hit. Isaiah Buggs, Carlos Davis and Chris Wormley all contributed and the pass rush forced several holding penalties all without Stephon Tuitt. This group was a strength coming in and they didn’t disappoint.

5. Red Zone Woes – It took 7 possessions and two quarters to get there and the results were not good overall. The first drive of the second half had 3 plays for 6 yards inside the 20. The next drive had 3 plays for 2 yards. Those both resulted in field goals. The next play in the red zone resulted in a touchdown. Moving forward the offense needs to improve here and put TD’s up instead.

6. It Wasn’t All of a Sutton – It happened right away from the opening kickoff. Cam Sutton was up to the task to be “that guy” making plays. He helped corral the opening kickoff to prevent a touchdown return.  In the passing game he broke up too passes.  He made to plays behind the line of scrimmage including the ginormous 4th down stop. He was even in good position on the touchdown by Gabriel Davis.  A good debut to his season as a full time starter.

7. Smith Styles Something Special – The game has three parts. Offense, defense and special teams with the latter often being forgotten. The Steelers were in need of a big play and Danny Smith designed a punt rush that provided that spark. The punt block by Miles Killebrew and scoop and score by Ulysees Gilbert III was game changing. Long passing TD’s are great and pick six plays are exciting but the rarity of a special teams TD really energizes a team.

8. Youth Adds Opportunity – The changing of the guard at the offensive line positions has been well documented. With four new starters, three of which are first or second year players, it adds an element of mobility which the veterans didn’t have. We saw it on screen players with multiple linemen out in front. Kendrick Green was downfield in front of Chase Claypool on his end around. It’s an added element that could provide more flexibility to the offense.

9. One Horse Town – I mentioned in a preseason version of this article that it didn’t really matter who the backup running backs were because Najee Harris was going to be treated like Le’Veon Bell was and not come off the field. Well maybe the situation of playing from behind dictated it but I think we got our answer. No other RB got a touch and I don’t even think they saw the field other than special teams. Harris is the man and the others will be fighting for garbage time touches.

10. Oh He Was Ready – About a week ago there was a lot of speculation by some that T.J. Watt wouldn’t sign in time for this game and even if he did he wouldn’t be ready to go. It’s okay to raise your hand if that was you, we all make mistakes. Three tackles, one for a loss, two sacks, five quarterback hits and a forced fumble. Yeah, he was ready and combined with Ingram and Alex Highsmith who looked like a mirror image of Watt the way he was being tackled on pass rushes are going to be so fun to watch this year.