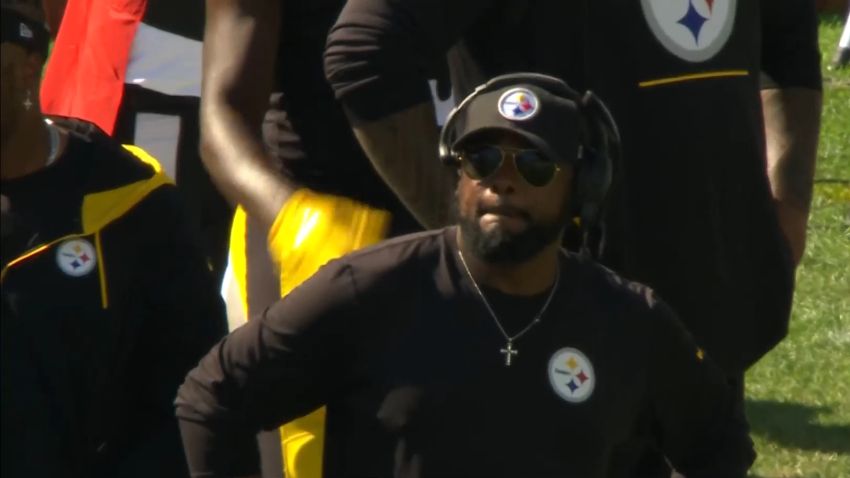 Pittsburgh Steelers head coach Mike Tomlin is well known for his ability to turn a phrase…and then to keep turning it, over and over again, rendering it cliché. Clichés, of course, contain at least a kernel of truth, but you also become judged by them when you use them.

So whenever Tomlin makes a decision that plays against taking a minor risk, he is held against his own standard (after all, the standard is the standard) of one of his go-to claims of not living in his fears. And that was evident today when he decided to punt on a 4th-and-1 play, trailing 23-14 in the fourth quarter with 8:36 to play.

Asked if he considered going for it on the play, Tomlin acknowledged after the game that he did. “But I felt comfortable in our ability to stop them”, he added. “I wanted to play the field position game, and I think we punted it and stopped them”.

It is true that they stopped the Las Vegas Raiders, after they got a first down on the first play of the ensuing drive, regaining possession with 5:51 to play, at a total cost of more than two and a half minutes in a two-possession game, as well as their second timeout.

The Steelers used their first-round draft pick this year to select running back Najee Harris back in April. While the offensive line is a work in progress, it says something if you don’t feel good enough about the odds of your first-round running back, who is adept at gaining tough yards, to pick up less than a yard to move the chains, down two possessions midway through the fourth quarter in your home opener.

They got the ball back at their own 32, by the way, two yards further back than the spot from which they punted.

Harris was asked after the game if he felt confident in his ability to get one yard, and of course he said yes. “But at the end of the day, it’s what’s best for the team”, he added, according to Aditi Kinkhabwala. “I’m just a player. I go out there and do what I’m told”.

RB Najee Harris, the #Steelers first round pick, says yes, he feels confident in his ability to get one yard; “But at the end of the day, it’s what’s best for the team.” And “I’m just a player. I go out there and do what I’m told.”

Likewise, when quarterback Ben Roethlisberger was asked if he would liked to have gone for it, he practically rolled his eyes. Asked if he had the authority to campaign to go for it, he said, “you saw me. I don’t have a chance, not when the punt team’s running on”.

Asked #Steelers QB Ben Roethlisberger if he has ability to lobby Mike Tomlin to go for it on fourth-and-one. He said, “You saw me. I don’t have a chance, not when the punt team’s running on.” Then he practically rolls his eyes when someone else asks if *he* wanted to go for it.

Indeed, there was no hesitation from Tomlin on the decision to punt, even though tight end Pat Freiermuth was very close to getting the first down on the prior play on 3rd and 6. They didn’t lose because of the decision not to go for it, but it was a moment that could certainly be fairly questioned, especially measured against his own policy of residing outside of his fears.