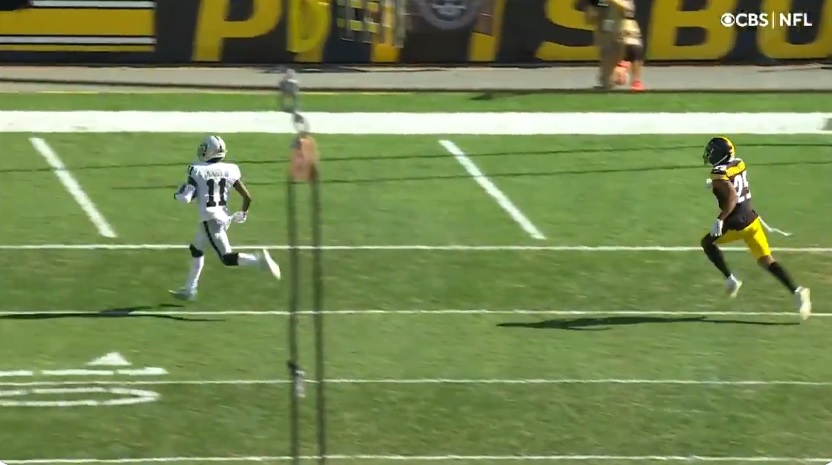 Henry Ruggs’ 61 yard touchdown was a backbreaker in the Pittsburgh Steeler’s home opening loss. A critical third down not only converted but housed to put the Raiders up 23-14 midway through the fourth quarter. After the game, Mike Tomlin was asked about the coverage breakdown.

“We gotta keep a lid on it,” Tomlin told reporters in his postgame press conference aired on the team’s YouTube channel. “Always. There always needs to be a lid on it. Regardless of what the structure of the call is or the circumstance. We can’t have people running behind our defense.”

But run behind it Ruggs did. Take a look at the play.

Carr was able to hold Minkah Fitzpatrick in the middle of the field while Ruggs ran to the inside of Ahkello Witherspoon, who was playing with outside leverage but unable to rally and close back on Ruggs as he stemmed to the post. Fitzpatrick was unable to make the tackle and Ruggs put the ball in the end zone.

Those are the types of plays the Raiders have gotten from Ruggs, who dazzled at the 2020 Combine with a 4.27 40. Last season, he averaged over 17 yards per catch and this year, already has multiple receptions of 30+ yards.

The Steelers are normally good about not allowing the big play. And even this week, it was the only play over 26 yards they gave up. But it was a major one. Instead of forcing a stop and getting the ball back down two points with plenty of time to go, they found themselves in a nine-point hole and forced to play catchup. Pittsburgh’s offense punted on the ensuing possession and only mustered a field goal the rest of the way.

Pittsburgh’s defense, overall, was good in this game. But battling numerous injuries and tired legs, they faltered in key second-half moments. None bigger than this touchdown.