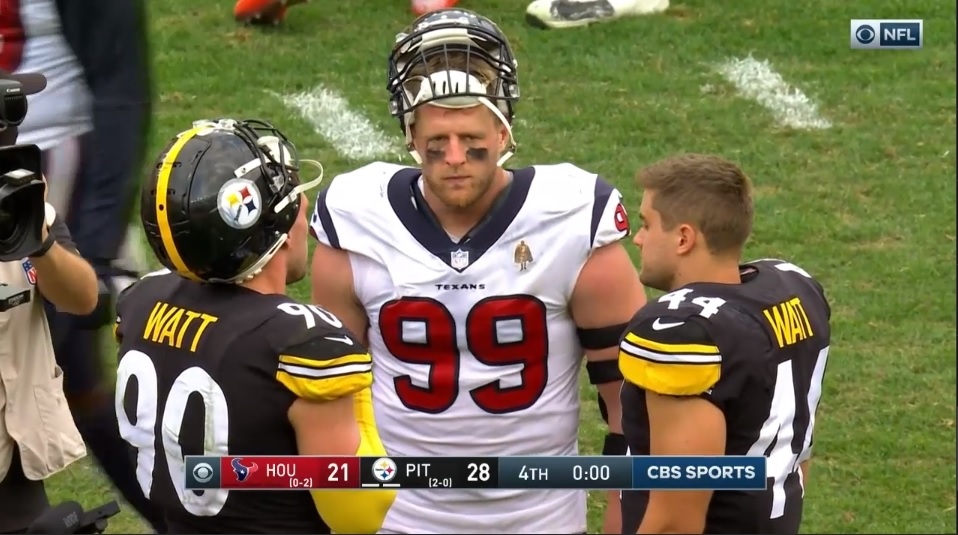 One day after signing his lucrative four-year, $112 million extension with the Pittsburgh Steelers that guaranteed $80 million, star outside linebacker T.J. Watt spoke to reporters and touched on many subjects, including how he’ll handle the new attention and expectations of a big contract extension, his goals for the Steelers, and more.

But one thing stood out when it came to Watt, and there was a noticeable change in his demeanor. Talking about the role his brother Derek and J.J. have played in his life showed softer, more impactful side of T.J.

Asked by ESPN’s Brooke Pryor what Watt’s conversations like with J.J. Thursday now that the contract is signed, Watt heaped praise on his older brother, who knows a thing or two about being one of the NFL’s premier star pass rushers.

“It’s been special. Both of my brothers have been very involved throughout this whole process and Derek was on the phone with me yesterday when we basically found out the deal was done,” Watt said to reporters. “I don’t take for granted a moment that this whole thing is special. Not only just the contract, but to be able to share these moments with my family. It’s so cool. It’s so cool that J.J. has gone through this and can even give the littlest amount of advice about how to word things. There’s just so much stuff behind the scenes that people will never really truly understand how much I appreciate them giving me perspective. It’s special. It’s the only word that I have for it. I love those guys to death. I will gladly pay for whatever I have to do because he has done more than take care of me over the last 26, 27 years of my life.”

As many know, J.J. signed a six-year, $100 million contract extension in 2014, making him the highest-paid defensive player at the time. Times have changed as Watt was released by the Texans in early 2021 and signed a two-year, $28 million contract in free agency with the Arizona Cardinals on March 1.

Having a guy like J.J. in his corner is clearly invaluable to T.J., who now embarks on a 2021 season with incredibly high expectations, not only from the Steelers’ fan base and media, but from the national media as well to see if he can live up to the moniker as the highest-paid defensive player in the NFL.

He’s not worried about it though, addressing the Associated Press’ Will Graves head-on after Graves asked a question about the pressure that now comes with the new contract.

“I’ve been dealing with pressure my whole life. Everybody always asks me, “What’s it like to be the younger brother of XYZ?” You know the answers to all of that,” Watt said. “I’m built for this. I truly believe that nothing monetary will change me as a person. The work that I put in will not change, it will only grow. Like I said in the beginning of this press conference, it’s my job to prove to all these people that have put this amount of money to me and stood on the table for me to say they want me here that they’re right. And I know I can do it. I know exactly what it takes. I’ve been doing it my whole life. It’s about just continuing to do it and staying hungry, and I guarantee everybody here right now and everybody in this building, I am still hungry.”

As long as he stays hungry and continues to produce, there will be no additional thoughts or hesitations when it comes to his contract extension. And if the going gets tough in 2021, Watt can always lean on J.J and Derek for some advice.

Oh, and what did J.J. do after signing his extension? He proceeded to record 20.5 sacks, earned First Team All-Pro, finished second in the NFL MVP behind Green Bay’s Aaron Rodgers, and was named the NFL’s top player in the Top 100 by NFL Network.