Steelers fans were given a break from the stumbling Ben Roethlisberger-led offense, as they were able to take in its best drive of the season. It was a 15-play, 86 yard drive that took over eight and a half minutes of the second quarter. 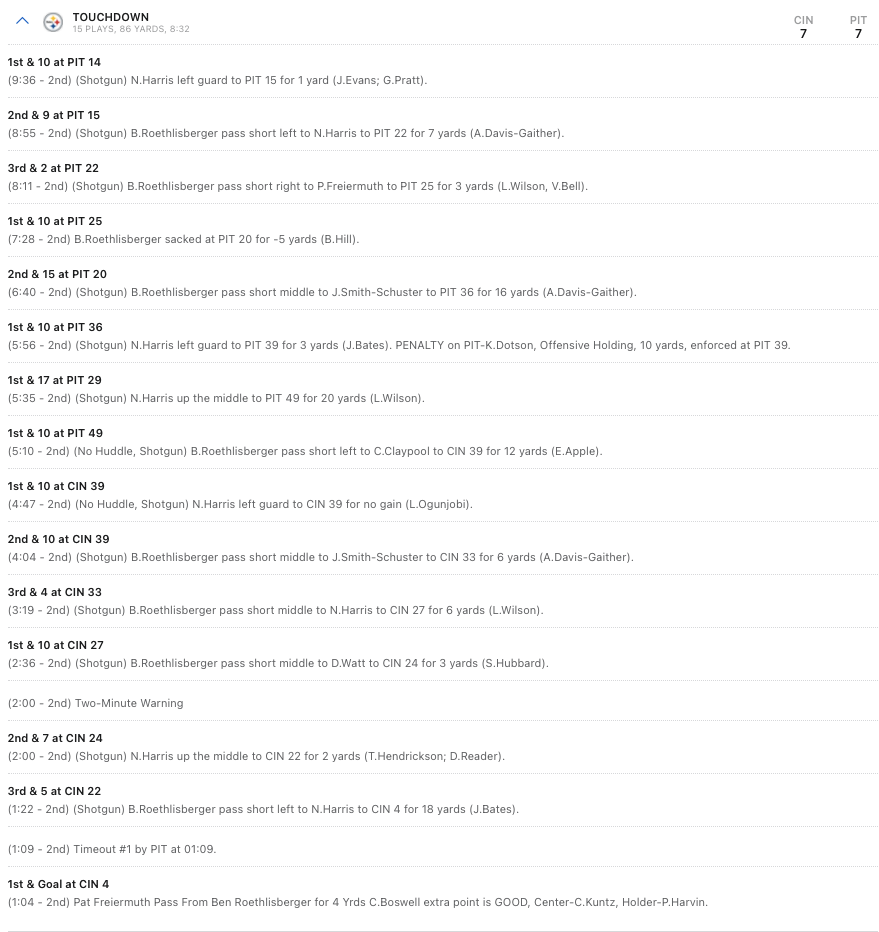 The cherry on top being that it ended in fan-favorite Pat Freiermuth’s first touchdown in the black and gold.

As chants of “MUUUUUUTTTHHHH” rained down from the mustard-colored seats of Heinz Field, Steelers fans began to wonder, “how the hell are we going to go into this halftime tied?” After enduring four drives prior that resulted in three punts and an interception, this seemed like a pipedream.

Unfortunately, the Cincinnati Bengals had other plans.

It’s possible the Steelers defense was just as surprised as the rest of the Steelers’ fanbase. After being able to rest for more than half of the second quarter, they came out extremely lackadaisical.

With only 1:04 left in the half, the defense lets Tyler Boyd catch the ball, dead center of the field, and make his way out of bounds.

The relaxed zone defense on this play was a tell for the entirety of this upcoming Bengals drive.

We’ve now reached the turning point in this game. However, it may not be for the reason you think.

Let’s take a look at the play.

The Bengals lineup in 11 personnel with the running back to Burrow’s left, a tight end to the right of the formation, and a receiver in the slot to the left.

At the snap Bengals QB, Joe Burrow fakes a hand-off to the running back and drops back.

The Steelers are in what is called a “2-Read” coverage also known as “palms”. Our own Alex Kozora did a great write-up of Keith Butler’s Palms coverage back in 2017. It’s a coverage that gives cornerbacks the ability to jump out routes. With the Bengals in a 2nd & 3, where you know they want to be able to get to the sidelines to save time, it’s not a bad call.

You can watch as both corners are very slow in their gaining of depth and only start to worry about #1 after #2 fully commits to a vertical/inside route.

Rookie Tre Norwood doesn’t do an awful job here as from his initial alignment, his job is to just wall off anything inside. His athleticism limits him from sticking Boyd here on the play. Luckily, Boyd feels Minkah Fitzpatrick’s presence and isn’t able to hold on to the ball.

That is until the flag on the field for roughing the passer.

No matter how you slice this one, it’s a tough one swallow as there’s nothing illegal about this hit. Ingram gets Burrow a little high, but only makes contact with his shoulder. The way Burrow’s head whiplashes, I think drew the flag from the refs.

Originally watching this, this is the play that felt like it catapulted the Bengals down the field. However, upon rewatch, the thing I want you to pay attention to is this look right here. 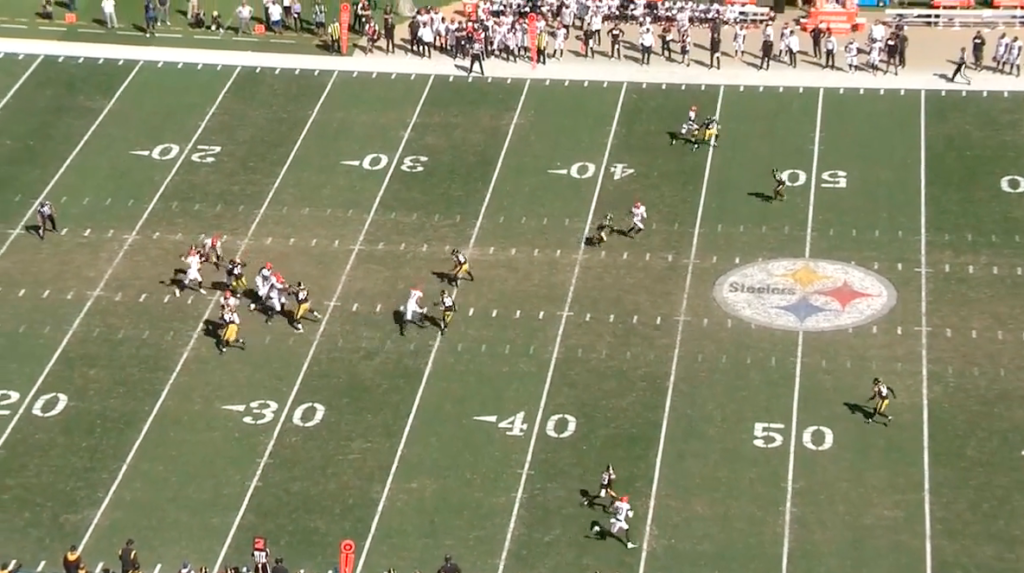 I believe this look right here, is the true turning point of the game. The receiver at the top of the screen is Ja’Marr Chase. While he looks covered at this screenshot, with James Pierre’s slow pedal, he’s just about to spring open. With the positioning of both safeties, neither one would be able to make a play on balls thrown to an outside receiver.

If I’m the offensive coordinator, I look at this play as either “they don’t respect our quarterback enough to go deep”, or “they don’t think our receivers are capable of making a play.”

And I think the Bengals’ coaches in the booth saw this and thought JUST that.

How do I know?

Fast-forwarding past the next play which is a simple slant completion against a soft cover 3 defense by the Steelers, we reach another 1st & 10 on the Steelers 34 yard-line with 43 seconds left in the half.

Let’s set the stage again, shall we?

The Bengals lineup in 11 personnel with the running back to Burrow’s left, a tight end to the right of the formation, and a receiver in the slot to the left.

At the snap Bengals QB, Joe Burrow fakes a hand-off and to the running back and drops back.

Get where this is going yet?

Outside of a presnap the motion, the Bengals lined up and ran the SAME exact play as the play on the roughing the passer.

The Bengals called a timeout just before the play and you can just about bet the coaches were in Burrow’s ear telling him to take a shot deep because the corners aren’t respecting the outside receivers in the slightest.

Burrow doesn’t read a thing from the defense before letting this one loose down the left sideline.

Remember how I said it looked like Pierre was in a decent position in the screenshot from the last play? This is the confirmation bias that shows he wasn’t. He seems late to go from his read steps to flipping his hips and going with the receiver.

Chase’s acceleration, while the ball is in the air, makes it look like Pierre is running in mud. Meanwhile, Chase does what he did 20 other times with Joe Burrow while a part of the 2019 Bayou Bengals, hit paydirt.

The play seemed to rub Steelers fans’ noses in the train wreck of an offense that Pittsburgh is currently deploying. A mere 27 seconds after executing a rarely seen, 15-play touchdown drive, the tie ball game that was seen as a dream scenario is already long gone from memory. Now comes the dread of thinking, “how is this team going to score another touchdown?”