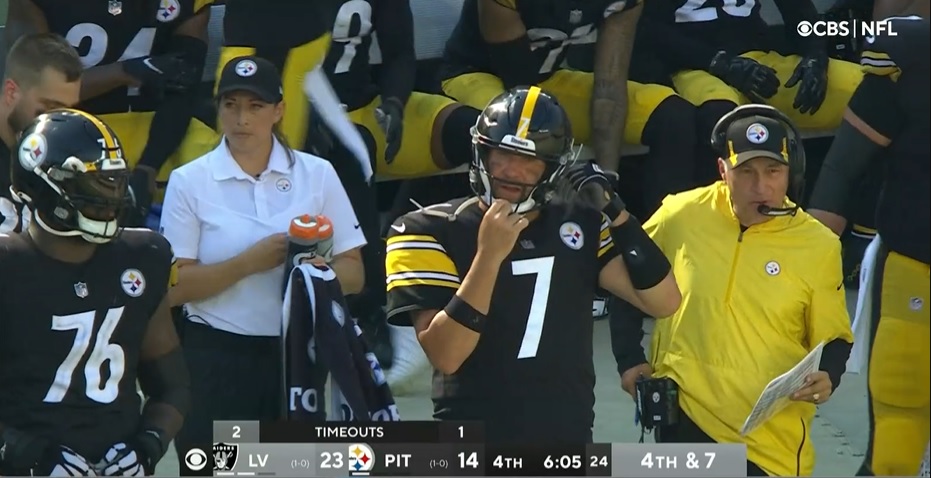 You know at the start of a new calendar year when you always forget to write the new one down? So you’re crossing out that 1-3-20 on January 3rd, 2021. And it takes you a couple weeks to kick that habit.

That’s the Pittsburgh Steelers’ offense right now. The 2021 version looks a lot like last year. Eventually, I think, things will get better and the team will turn the page. But the answer of when and how much better remains two giant questions.

Despite so much “new” with this offense – a new running back, offensive line, offensive coordinator, and several assistant coaches – this unit is plagued by the same issues of a year ago. A run game that’s offering little. A deep pass game still working on finding its groove. An offensive line closer to bottom of the league than the top. And overall, haphazard results and a group that only gets going once Roethlisberger is asked to put the team on his back, bump up the tempo, and take control of the game. And even then, things are far from great.

That’s not to say this group can’t get better. I suspect they will. Growing pains with this collective were to be expected and even the team leaders – Cam Heyward, Ben Roethlisberger, Mike Tomlin – have admitted as much.

But when will things begin to turn the corner? This isn’t the NBA or MLB. Numerically, this isn’t a long season where you can play a dozen games and not even be 10% of the way into the year. Even with the league money-grabbing an extra game onto the season, 17 games still means each one counts in an absolutely massive way. Each game nearly 6% of the season. It’s easy to dig yourself into a hole and spend the back half of the season trying to claw out of it.

Losing streaks, unlike other sports, aren’t just part of the ebb and flow of a season. They define your season. And this team won’t win a lot of games with an offense averaging 16.5 points per game, as they’ve done over the first two weeks. If things improve by say, Week 4, then they can ride out this tough start. If it doesn’t start to gel by Week 9, this season might be curtains.

There’s an even more important question. How good can this offense be? Assuming this is the floor, probably a bottom-seven unit through the first two weeks (ahead of dumpster fires like the Jets, Jaguars, Bears, and Falcons), what is the ceiling? Is it average? Something closer to the top ten? Right now, it’s difficult to imagine the latter, though the talent at the skill positions can’t be forgotten. This team has weapons galore. But it hasn’t produced in a lot of points.

This offense, as we’ve known practically all year, will be defined by the play of its guys up front. Does the offensive line have potential? Sure. In small pockets, they’ve flashed it. Kendrick Green’s playing with the meanest of mean streaks. Dan Moore Jr. doesn’t look like a rookie. Trai Turner’s been a bit better than I expected while Kevin Dotson might be the most talented player of this group. But it hasn’t come together for this unit. An O-line is the sum of its parts, not an individual evaluation.

The quarterback can’t be forgotten about either. Nor can he be absolved. But the Steelers’ mantra this offseason was a better running game. Without it, everything else is moot. Roethlisberger’s play, what the young receivers can do, whether or not Pat Freiermuth is the long-term answer. None of it matters without an offense that can run the ball in an efficient, competent way.

What’s the secret to success? It isn’t much of one. It starts with being better on first down. Through two weeks, this has been one of the NFL’s least efficient first down offenses. In Week 1 against the Bills, they averaged four yards on 1st and 10. Only the Chicago Bears and Minnesota Vikings were worse. In Week 2 against the Raiders, they gained 77 yards on 21 first downs. 3.7 yards per play and only nine of them, 42.9%, would be considered successful (four yards or more).

It’s no wonder why the Steelers have been so inefficient on third downs, 9-24 (37.5%). Second and long quickly turns into third and long. Which quickly turns into a punt, stalled drive, or both. That’s the metric that must get better. It’s not mystical, magical, or complicated. In that area, this must be a better team than a year ago, where they finished 26th on first down at just five yards per play on 1st down.

If they do that, they’ll see improvement. If not, it’s going to be a long year that’ll feel a lot like the one that ended with “20.”