One of the most common questions throughout training camp in 2021 was “When will Stephon Tuitt join his teammates?” Recovering from the brutal loss of his brother who died in early June was the priority, as all fans and friends understood.  But as the weeks dragged on and Tuitt remained separated from his team on the sidelines, curiosity grew.  What was keeping him from practicing?

Most Steelers fans were shocked when the team placed the powerful DE on the Reserve/Injured list just prior to the start of the regular season.  For the entire preseason, Tuitt had been seen on the periphery of team practices, either in a bucket hat and street clothes or doing individual work with trainers but never joining team drills.  HC Tomlin remained tight-lipped about Tuitt when asked, as he did with all injuries and players limited or missing from practice this summer.  When asked about Tuitt’s absence from team work, DC Keith Butler acknowledged it was a combination of grief, deconditioning, and surprisingly…injury.  What?  When was Tuitt injured when he hadn’t played a single snap in practice or preseason games?

Finally, small bits of information have trickled out of the South Side facility.  First, there was this tweet from Stan Savran:

He had (minor) knee procedure

Hmmm, a minor procedure could just be removing fluid from the knee with a needle aspiration.  Then, in his radio show, Savran mentioned that he had seen Tuitt on Tuesday September 7th using a crutch and that he had just had surgery the prior week.  But there was good news as well, as he mentioned to me:

He said he was doing well and feeling great

Finally, there was this, from Gerry Dulac’s chat on September 8th:

Sunner in Orlando: How bad off is Tuitt’s knee? Why did we not hear of this injury over the summer? Did he have surgery or did he just try rehab to avoid surgery?
Gerry Dulac: It was an injury that could have bothered him on and off all season, which is why he had surgery now.

OK, wow, we now have confirmation that Tuitt did, in fact, have surgery.  But since it was a minor procedure, he should be back soon, right?  Not so fast, as we learned later in that chat:

MTScott: Do you think Tuitt, Banner & McFarland will be ready to go on week 4?
Gerry Dulac: No, no and maybe

So we know that Stephon Tuitt had knee surgery for a nagging injury, and that it was considered a minor procedure but he may not be ready to play by Week 4, the soonest he can return from IR (note that he can return to practice as soon as 3 weeks after being placed on IR).

That almost surely means he had arthroscopic knee surgery, more commonly known as a “knee scope” — a minimally invasive approach with little incisions and a skinny telescope that typically leads to a quick recovery.  Well, sort of.  The rate limiting step for recovery isn’t the small incisions; instead, it is dependent on what work is actually done in the knee and how involved it is.

Based on Gerry Dulac’s comment that Tuitt may need more than 6 weeks to return to actual game play, we can assume that some structural work was done but that this was not a ligament repair (such as an ACL or MCL), which is a much longer recovery.  This leads me to the conclusion that a meniscus tear is the most likely issue that was troubling Tuitt.

So what if it was a meniscus tear?  And what does that even mean?

Each knee has a medial and lateral meniscus.  These crescent-shaped bands of cartilage serve as the shock absorber for the knee and allow the tibia (the larger of the lower leg bones) to glide over the bottom of the femur (thigh bone) when the knee bends.  The menisci are wedges, thicker at the border where the blood supply is best and thinner in the inner aspect, which has a limited blood supply.  The lateral meniscus covers a larger portion of the tibial plateau (the flat top of the tibia that articulates with the femoral condyles to form the knee joint).

A tear in the meniscus is usually caused by a quick twist or turn of the knee.  As you might expect, this is a common injury in athletes.  Older patients can get a tear because the tissue is old and thinned.  The mechanism most likely to cause a medial meniscus tear is abduction (the leg bends out away from the body) and external rotation while bearing weight with the knee flexed.  A lateral meniscus tear is caused by the opposite scenario, meaning abduction and internal rotation of a semi-flexed knee bearing weight.

The symptoms of a torn meniscus (from www.sportsmd.com):

There are a variety of ways the meniscus can tear: 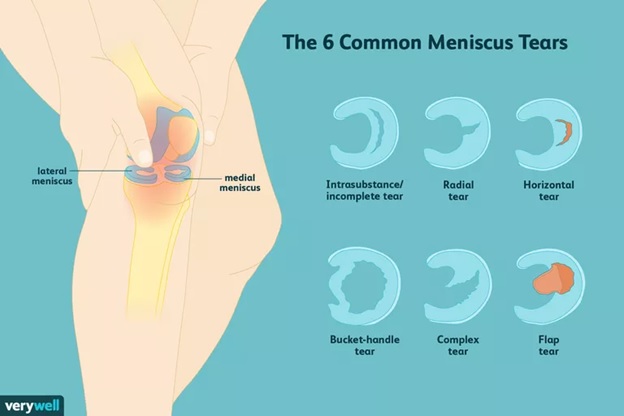 Rest and physical therapy is often the first line of treatment and can be effective but not all patients can return to full physical activity without surgery.  In a New Journal of Medicine study comparing PT versus surgery, patients were randomly assigned each treatment group.  33% of patients from the PT group eventually crossed over and underwent surgery.  This was most likely the case with Tuitt.  And remember, those shock absorbers are crucial for linemen, who put a lot of weight on their knees.

So why do surgery for a meniscus tear?

Remember earlier that I mentioned only the outer, thicker border of the crescent-shaped meniscus has a good blood supply and the inner border of the meniscus is avascular?  That is a factor in the choice of operation.  An attempt to repair the inner rim is usually not successful because the lack of blood supply does not allow for healing the edges of the repair.

What about the recovery time (because that’s the big question here, right?)

With a partial or even a complete meniscectomy, patients are able to be full weight bearing immediately after the surgery, so no crutches are necessary unless the patient is hesitant to walk due to pain.  Pain is primarily due to swelling from the initial injury and tends to be the rate-limiting step to recovery.  It’s possible that Tuitt was using a crutch for support to minimize pain with walking.

The average time for all meniscus repairs is 4-6 weeks but it depends on the type of tear and the type of repair needed.

A meniscectomy has the fastest recovery at 3-6 weeks.

A simple meniscus repair may sideline a player for 6-20 weeks.

A complex repair can be season-ending, taking anywhere from 7-12 months for return to play.

Lateral meniscus repair typically has a longer recovery.  In a review of NFL players undergoing 77 repairs of the lateral meniscus, Dr. James Andrews found that 61% (n = 47) resulted in the athlete returning to play at his previous level of competition with an average length of time to RTP of 8.5 months.  OK, don’t freak out, they included all different types of repairs so that average includes a wide range of timeframes.

Studies show that medial meniscus repair can be much faster.  You may recall that QB Ben Roethlisberger underwent a meniscus surgery in 2016, missing only two games in three weeks, returning to face the Ravens in Week 9 after the bye week.

2019 was the year of the meniscus for the Steelers:

We don’t know what surgery Stephon Tuitt had and we’re unlikely to get any further detail given that he was placed on IR.  With the new IR/Return rules, he can be back at practice soon and take the field on gameday starting Week 4.  Yes, players always present an optimistic picture but Tuitt’s comments were encouraging.  So let’s sit tight and hope to see him back at practice by the end of the month.