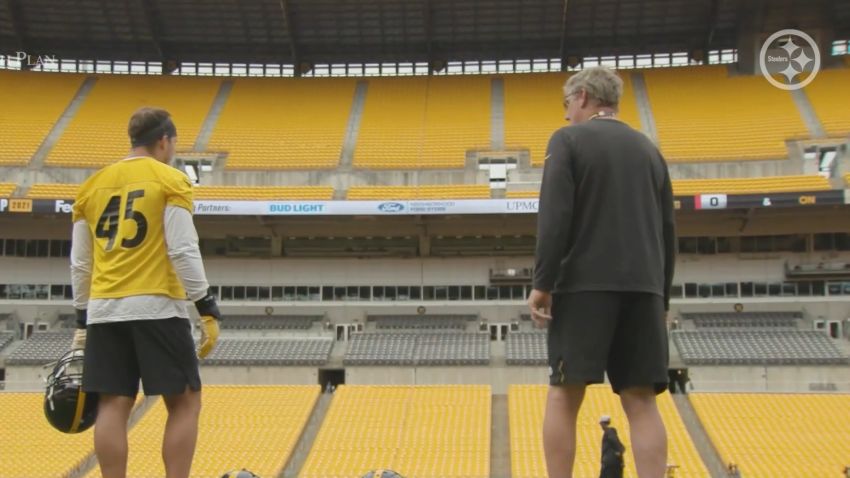 It’s not easy to be traded at any point when it’s not your choice. Chances are, you’ve got a house that you’re trying to make your home. You might well have children who have begun to grow up in that house. You have to move to an entirely different state, most likely, with new coworkers, and doing the same job, only in a different language.

The good news is, this isn’t totally alien to inside linebacker Joe Schobert, who is going into his sixth season, and first with the Pittsburgh Steelers after they traded for him last month. Though he’s only had a few weeks in the system, he is presumably being prepared to set their defense come Sunday in Buffalo. His background in different schemes and being surrounded by knowledgeable teammates and coaches, however, has been a great help.

“I’m learning. It’s my sixth scheme in six years, which is kind of nuts to think about. But it’s been a good learning process”, Schobert told reporters earlier today after the Steelers’ first full official practice of the regular season.

“I’ve got a lot of veteran guys on the defense to ask questions to, on the field, off the field, on the sideline”, he added. “Coaching staff, I can go up to any one of them, ask questions, get answered right here and now. It’s been a pretty good transition for me”.

The Steelers have been running variations of the same defense for about two decades now, with modifications of the Dick LeBeau system being implemented by his successor, longtime linebackers coach Keith Butler, as well as head coach Mike Tomlin.

Schobert spent his first four years with the Cleveland Browns, but they changed coordinators almost every year that he was there. He signed with the Jacksonville Jaguars in free agency in 2020, and was set to play under his second different offensive coordinator already since arriving there.

Assuming that he actually has a future in Pittsburgh beyond this season, having been traded to the Steelers should actually prove to be a blessing for him with respect to scheme stability. While Butler has been on the hot seat before, it seems to have cooled lately with the team having one of the better defenses in the NFL over the past two years.

But that’s a subject for the future. The right now is Sunday against the Buffalo Bills and whether or not Schobert is ready to go in the Steelers’ defensive scheme. He’s had a couple extra weeks of practice and learning since his lone preseason appearance, and that will have to be enough.