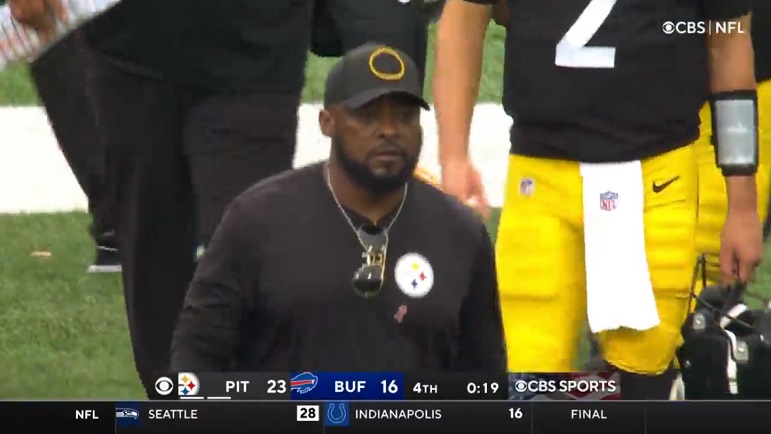 It’s hard to dispute that the Pittsburgh Steelers Sunday road win against the Buffalo Bills was the best Week 1 victory head coach Mike Tomlin has had during his career. Sure, the Steelers 15-9 Week 1 road victory against the Atlanta Falcons in 2010 comes close, but it is now in second place behind Sunday’s game in Buffalo. So, I guess the next question is, where does Sundays Steelers win rank all-time when it comes to Tomin in the regular season?

Tomlin has obviously had quite a few great regular season wins during his career in Pittsburgh. That said, when it comes to most of Tomlin’s 146 regular season wins to date, the Steelers were either favored or skylight underdogs ahead of those contests. In short, in a lot of those wins Tomlin has had to date, his team was expected to be victorious in them.

You might be surprised to learn on this Monday that the Steelers have only been 6 or more-point underdogs in just 12 regular season games since Tomlin became head coach in 2007, according to Statshead. In those 12 games, Tomlin’s Steelers are now 4-8 with the most recent win coming Sunday against the Bills in Buffalo.

When was the last time prior to Sunday that a Steelers team won a game when they were a 6 or more-point underdog? Try 2019 against the Los Angeles Chargers. That’s the game that quarterback Devlin Hodges started that felt like a Steelers home game due to the large amount of Pittsburgh fans that were able to get tickets to that contest. The Steelers beat the Chargers 24-17 on that Sunday night at the StubHub Center.

Prior to that 2019 win against the Chargers, one must go back to the Week 13 game against the Baltimore Ravens in 2012 to find the last time a Steelers team won a game in which they were 6 or more-point underdogs ahead of kickoff. That was the game that quarterback Charlie Batch was forced to start. The Steelers won that game on a last second field goal by Shaun Suisham. It was a great win and wound up being the last NFL game that Batch would play in. The Steelers, by the way, were 7.5-point underdogs ahead of that game starting.

The Steelers only other win under Tomlin in which the team entered the game as 6 or more-point underdogs came in Week 2 of the 2010 season. That 19-11 win against the Tennessee Titans included quarterback Dennis Dixon needing to start before he gave way to Batch in the second half. Those two quarterbacks combined to complete just nine total passes on 17 total attempts for a whopping 43 yards. Throw in the four sacks for 22 yards and the Steelers offense had just 21 net yards passing.

Unlike the other three games I have highlighted in this post, the Steelers did have starting quarterback Ben Roethlisberger against the Bills on Sunday in Buffalo. With them having him the entire game, it probably takes away a little bit from the greatness of the win. Even so, the Steelers entered Sunday as 6.5-point underdogs to a Bills team that many truly believe will be playing in the AFC Championship game again this season. Rate it how you will.

At worst, Sunday’s win against the Bills should qualify as being a top five best regular season win of all-time for Tomlin. I’m interested in hearing where you would rank Sunday’s win on such a list and which other wins, if any, you would have ranked ahead of it. Let me know in the comments below.