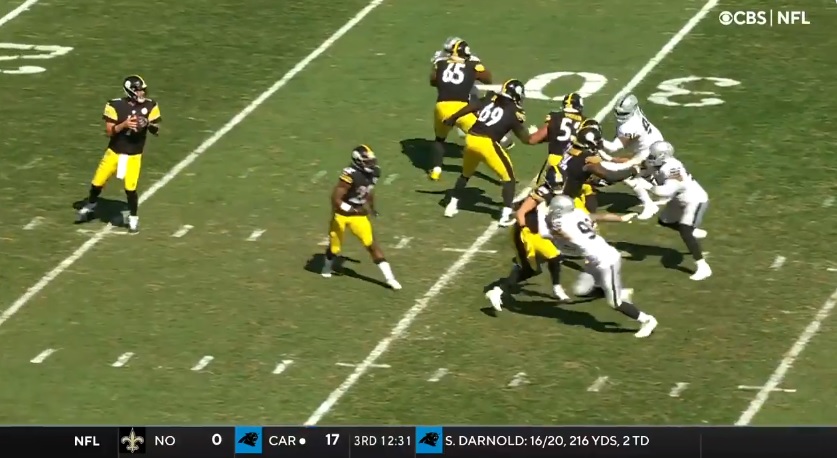 Winners and losers from the Pittsburgh Steelers 26-17 loss to the Las Vegas Raiders Sunday afternoon.

JuJu Smith-Schuster – Smith-Schuster was one of the few sources of offense today. One of the most difficult wide receivers to tackle in open grass, he ran over and through multiple Raiders’ defenders, including through one on his three-yard jet motion touchdown. He was the team’s top option on third down and answered the call. Like last year, his work was all underneath. But it was effective.

Pressley Harvin III – Bounce back performance for Harvin after an uneven NFL debut. A big 58 yard punt that resulted in a 49 yard net, a very good number, followed up by a punt downed well inside the five yard-line. Three of his four punts landed inside the 20.

Najee Harris – Running room wasn’t plentiful today but Harris found the end zone, which is enough to get you on this list in a pretty sloppy, defensive kind of game. Harris had a brutal stiff-arm on Jonathan Abram in the first half and then broke a tackle on a 3rd and 10 reception short of the sticks in the second, scoring his first NFL touchdown from 25 yards out. He ran hard and didn’t go down easy. If only he had a little more room to work with.

Melvin Ingram – Ingram was very good today. At least going forward. He’s poor in space when asked to cover but played games with rookie RT Alex Leatherwood in the first half. Ingram’s power is a force and his presence was all the more important with TJ Watt suffering a game-ending groin injury. Ingram finished the day with a team-high three QB hits.

Chris Boswell – Kicking the longest field goal in Heinz Field history will certainly get you on this list. Boswell made it a 23-17 game late in the fourth quarter with a 56 yarder that just got over the crossbar. Big kick at the time to make it a one-score game.

Robert Spillane – Getting the start in place of the injured Devin Bush, Spillane wasn’t amazing. But he was consistent. While pulling double-duty on special teams, he held his own in the run and pass game and wasn’t picked on in coverage the way some (rightfully) feared he might be. Spillane led the Steelers’ defense in tackles today.

Eric Ebron – Ebron had already been losing out on playing time to Pat Freiermuth out of the gate last week. A third down drop this week didn’t help matters. Ben Roethlisberger kept the play alive and had Ebron open on the left side for what – yes – would’ve been a tough catch but one Ebron needs to make. Freiermuth’s plus hands have carried over from the summer and he’s the better blocker. Ebron’s involvement in this offense is shrinking.

Run Game – Which for the second straight week, did very little. No one is blameless here but the issue is much more up front than it is on first round pick Najee Harris. The Raiders are a tougher front who play a lot of eight men in the box but still, the run game isn’t being efficient enough, forcing this offense to look too much like last year’s haphazard version. Pittsburgh was poor on 1st and 10 in this one, making life much tougher on third down, allowing the Raiders’ pass rush to pin their ears back and attack.

Ahkello Witherspoon – We’re going to have to go back and evaluate the Henry Ruggs TD closer. But it’s never a good sign when the first play you’re in for, your defense gives up a 61-yard touchdown. Witherspoon may have been playing outside leverage with Minkah Fitzpatrick inside but wasn’t a factor on Ruggs’ backbreaking score. Witherspoon got the hat with Joe Haden inactive. He’s likely to return to street clothes assuming Haden is good to go in Week Three.

First Half Offense – Which has again been pretty close to lifeless. They hit the end zone this week, at least, but have seven points in the first half of the last two games. That included a punt to start today’s game. Pittsburgh’s scored just one TD on an opening drive since 2019 (34 drives). That of course isn’t all on Matt Canada but the opening script results haven’t been better with him at the helm.

And things didn’t get a whole lot better in the second half either. The defense has kept the score down. But the offense hasn’t been able to pick things up.

Tre Norwood/James Pierre – Need to go back and watch them more closely but neither were good enough today it seemed. And picked on by Carr. Gotta play better.