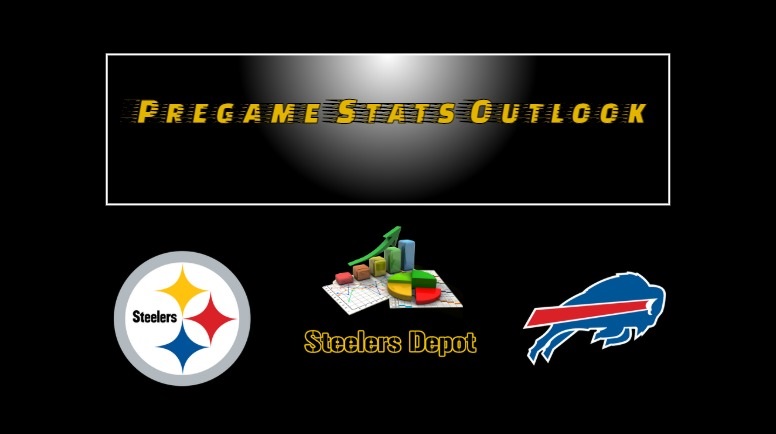 One of the biggest things I noticed was in the first half, the Steelers offense got off to a slow start, punting the ball four times in the first quarter. Diontae Johnson had two drops early and another from Eric Ebron, crucial plays that could have helped keep the chains moving and provided more success early on. The Steelers defense provided two turnovers and kept the Bills at bay for most of the first half, but the offense unfortunately could not capitalize. This does not happen very often against a team like Buffalo, and to help illustrate these points let’s take a look at first half offensive success rates and expected points added (EPA) league wide for the 2020 season: 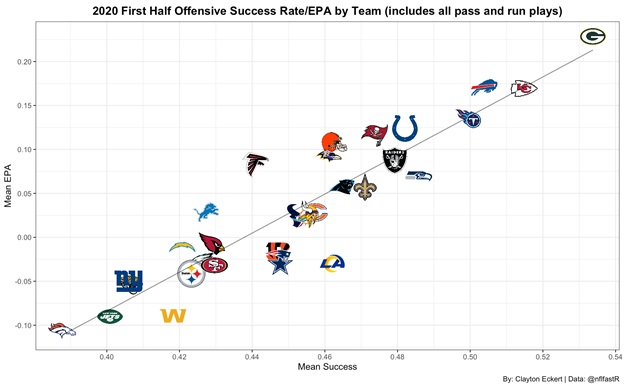 As we can see on the graph, the Bills were top three in both datapoints in 2020 and the Steelers really missed an opportunity in this game. This also highlights the issue the Steelers have had with lacking strong starts to games, which is something I will be monitoring closely this season. Can the offense have a better start in this matchup (and in games throughout the season) to keep what they do balanced?

Another topic I wanted to hit on from the 2020 matchup is air yards, particularly deep passes (in the 20-yards or longer range). Josh Allen had more attempts in this range as expected (six), twice as many as Roethlisberger (three) to be exact. An important takeaway from this is none of the passes from either quarterback were completed. This highlights the fact that the great game that Stefon Diggs provided on his ten catches were shorter targets (only two were 10+ air yards) but eight of his ten catches were successful plays. Also, four of his ten catches had 10+ yards after the catch. Air yards were a strong suit for Josh Allen and Stefon Diggs in 2020, another element of the Week 14 matchup last year I wish the Steelers could have capitalized on. Here’s some context to this point: 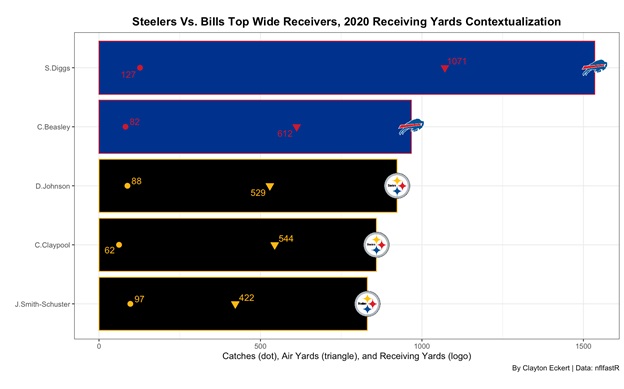 Stefon Diggs had more air yards than all the other wide receivers had in total yards! What type of success do you think the quarterbacks will have on deep passes in this matchup? How do you think the Steelers defense will perform against Josh Allen and Stephon Diggs on Sunday?

One last key takeaway from the last matchup between the two teams was time of possession. The Bills won this facet of the game, possessing the ball just over ten minutes longer than the Steelers. If Pittsburgh can get the stronger start that I discussed earlier, Najee Harris will likely be a key component of success and time of possession. This would not only help Pittsburgh’s offensive success, it would also give the defense less snaps to have to stop the Bills potent offense. To highlight my point, here’s a table of the Steelers rushing attempts from the 2020 game and success rates (in bold):

Looking at the success column, the slow start in the first quarter is highlighted again with zero successful runs. The second quarter is when the Steelers had most of their success, four of the five successes in the whole game. Another reason I feel a strong start is important is the lack of rush attempts in the second half, only three attempts in the third quarter. This again highlights the need for a stronger start so the offense can stay balanced instead of predictable throughout the game, especially late in games. I am hopeful and optimistic that with Najee in the backfield, we will see an improvement in rush successes and time of possession overall, allowing the offense better balance than we saw at the end of the 2020 season.

How do you see this game playing out? Do you think the game will unfold similarly to last year, or are you optimistic the Steelers can perform well and get the win? I hope you are as excited as I am for the regular season to begin and would love to hear your thoughts in the comments. Thanks for reading!