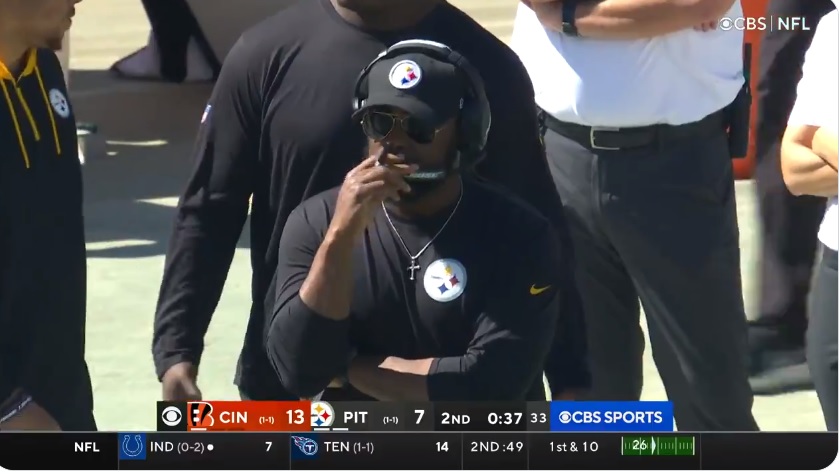 Winners and losers from the Pittsburgh Steelers ugly 24-10 Week 3 loss against the Cincinnati Bengals Sunday afternoon.

Pat Freiermuth – I’ve joked throughout the first two weeks that if you simply find the end zone, it’ll be enough to get you on this list. I’m not joking anymore. Freiermuth recorded the first TD of his career, a short shovel pass where he bowled over a linebacker and the goal line. He also chipped in a 15 yard reception and third down conversion.

Najee Harris – If for nothing else, for being the Steelers’ bellcow. If there’s one dude who is going to feel it tomorrow morning, it’s Harris. He was the offense today, running and receiving, and took some big blows along the way. He ran tough, broke tackles, and made the most of limited running room. It was nice to see him get more involved in the designed passing game, at least. His 14 receptions set a Steelers’ record by a running back. He did have several drops but the final two at the end, let’s be honest, just didn’t matter.

Minkah Fitzpatrick/Terrell Edmunds – For at least creating a splash play defensively. Fitzpatrick driving on a Joe Burrow throw, Terrell Edmunds finding and picking the ball off. It’s not much but it’s something on a dreadful today.

Matt Canada – I’m supposed to put a specific list of names here. But you could spin around and throw a dart at this roster and land on a loser today. I’m starting with Canada not because all of the offense’s issues are with him. But they began that way. Pittsburgh came out heavy in 13 and 21/22 personnel trying to #EstablishTheRun. They didn’t, partially due to some penalties but partially due to the heavy front they were trying to run into. Something they had to have expected, knowing how the Bengals go with even heavier 5-2/6-2 fronts to stop the run, as they’ve successfully done the first two weeks. That wasn’t the way to establish the ground game and that proved to be true.

Beyond that, there’s very little threatening about this offense. Again, players are certainly to blame for that but good coaching has to scheme and overcome weaknesses. So far, Canada hasn’t done that job but his approach to the run game was really disappointing today.

James Pierre – After the Steelers tied the game at seven, they immediately allowed a Joe Burrow two-minute drill to take a 14-7, halftime lead. Pierre gave up the TD, burned by rookie JaMarr Chase for a 34 yard score down the left sideline. A big play in the game.

Outside Linebackers/Pass Rush – Not much from these guys today, which isn’t a shock considering the multiple injuries at the position, a defense missing TJ Watt and Alex Highsmith in the worst way. Burrow had all day in the pocket while even the team’s best OLB, Melvin Ingram, struggled with missed tackles, one of which led to Tyler Boyd’s first TD of the day. Shouldn’t be dropping him into coverage in the first place but he’s gotta make the tackle and not go for the KO hit. Young guys like Jamir Jones and Derrek Tuszka didn’t win 1v1s and struggled to squeeze the backside cut by Joe Mixon, who created consistently solid pickups and explosive runs. The defense finished the day with zero sacks and zero QB hits.

Offensive Line – Penalties and poor play. The best thing I can say about this unit is they picked up their QB after letting him get hit time and time again. They stalled out drives, didn’t protect well, and limped their way (literally and figuratively) throughout the game. One of many big issues with this offense.

Every single starting offensive lineman today was called for at least one penalty. Fire me into the sun.

Eric Ebron – Three targets, zero catches. One drop, arguably two. He has one catch on seven targets this year.

Ben Roethlisberger – Roethlisberger’s supporting cast isn’t helping a lot but Ben isn’t doing the team many favors either. He’s trying to do too much to compensate. The worst example of that being his second INT to Logan Wilson, a pass thrown directly at him. I don’t know how Roethlisberger doesn’t see *this*.

But it’s far from the only negative play. Sacks where he should’ve thrown the ball away an an offense that almost literally is incapable of completing a pass ten yards downfield. This is his swan song. But he’s singing off-key.