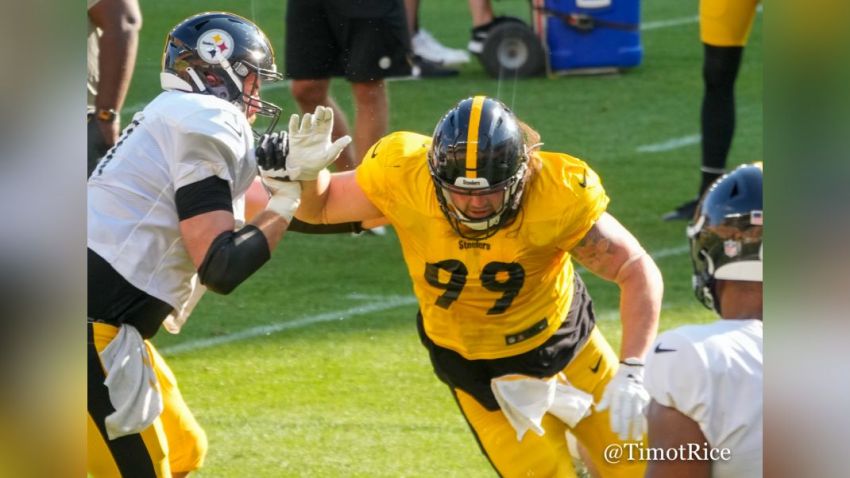 The Pittsburgh Steelers waived defensive tackle Henry Mondeaux on Friday, and on Tuesday they signed him to their practice squad after he cleared waivers. It was one of several roster moves the team made Tuesday. In addition to Mondeaux, the team signed WR Tyler Vaughns and LB Delontae Scott to the practice squad. WR Rico Bussey was placed on the team’s practice squad/injured reserve list.

Mondeaux, who made the Steelers 53-man roster initially last Tuesday, was waived on Friday to make room for cornerback Ahkello Witherspoon, who the team acquired in a trade with the Seattle Seahawks.

After starting the 2020 season on the Steelers’ practice squad, Mondeaux was promoted to the 53-man roster in late October. He then proceeded to dress for every game the remainder of the season and ultimately logged 88 total defensive snaps, 182 special teams snaps and one snap on offense as a fullback. He finished the 2020 regular season with five total tackles, one of which resulted in lost yardage and two quarterback hits. Mondeaux had previously spent the entire 2019 season on the Steelers’ practice squad.

With Mondeaux now on the practice squad and with defensive end Stephon Tuitt now on the Reserve/Injured list as of Wednesday, the Steelers now have six defensive linemen on their 53-man roster in Cameron Heyward, Tyson Alualu, Chris Wormley, Carlos Davis, Isaiah Buggs and Isaiahh Loudermilk.

Vaughns, a receiver out of USC, went undrafted in 2021. In college, he caught 222 passes for 2,801 yards and three touchdowns, posting a 33/406/3 stat line in six games last season with the Trojans. He was signed by the Indianapolis Colts after the draft and carried through training camp. Initially signed to the Colts’ practice squad, he was released from it last week.

Scott is an EDGE rusher from SMU, part of the 2020 draft class. As a fifth-year senior in 2019, he racked up 17 TFL and nine sacks, second on the Mustangs in both categories. He was signed by the Green Bay Packers as a UDFA in 2020 and spent two years with the team but was released this summer.

Bussey made noise in training camp and landed on the practice squad after the Steelers initially cut him last week. He’s apparently suffered an injury since then and will land on IR.

With today’s roster moves, the Steelers have a full 16-man practice squad.