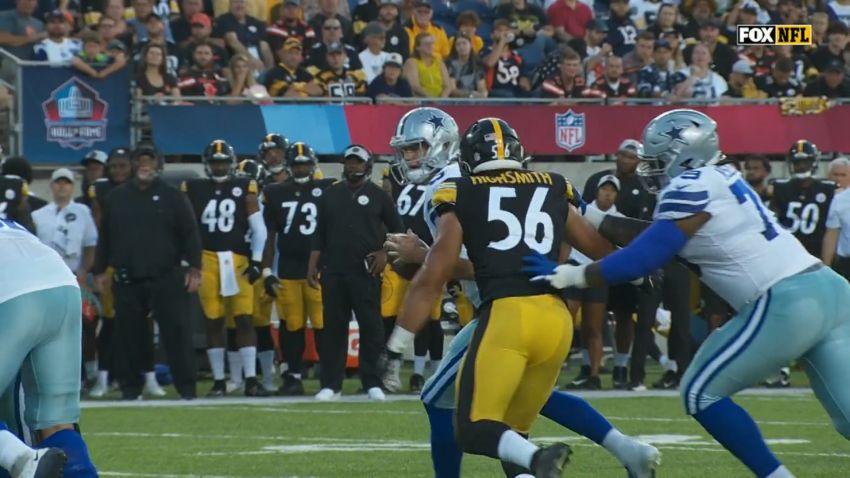 Having a three-headed monster at outside linebacker has helped the Pittsburgh Steelers try their best to keep Melvin Ingram, T.J. Watt and Alex Highsmith relatively healthy early in the season.

Though Watt and Highsmith are dealing with groin injuries, the Steelers have been able to rotate all three in and out early in the season, and even threw second-year linebacker Jamir Jones into the mix late in the game against the Las Vegas Raiders in Week 2.

That said, Bleacher Report listed Highsmith as the one key player on the Steelers that needs more playing time.

To date, Highsmith has played 60% of the defensive snaps, recording 46 snaps against the Buffalo Bills in Week 1 and 44 in Week 2 against the Raiders, all while dealing with that groin injury, which eventually knocked him out of the Week 2 loss to the Raiders.

With Highsmith dealing with the groin injury, Ingram has gotten a ton of run, playing in 74% of snaps (111 total) through two weeks. Those numbers are a bit concerning for Bleacher Report’s Maurice Moton, who tabbed Highsmith as the Steelers’ player needing more snaps.

“As a pass-rusher, Ingram had a more productive outing than Highsmith, logging three quarterback hits and a sack. The second-year outside linebacker recorded three tackles, one for loss and continues to show promise in flashes,” Moton writes. “In both games, Highsmith opened with the first unit, though Ingram has played more overall snaps.”

I don’t think Ingram playing more snaps is an indictment of Highsmith at this point, considering he’s still developing as a pass rusher coming out of Charlotte as a third-round draft pick in 2020, nor do I think it shows how the Steelers feel about him.

Rather — and this is point Moton misses big time — it tells us where Highsmith is with his injury. He was a late addition to the injury report in Week 1, and now looks like he won’t play in Week 3 against the Cincinnati Bengals having missed practice Wednesday and Thursday.

We’ll see what happens once all three are healthy once again, but it would be nice to see the Steelers truly get all three pass rushers on the field at once, rather than taking one off the field and decreasing snaps overall for one of Highsmith or Ingram, raising these silly questions about snap counts and usage two weeks into the season at a position where depth — at least on paper — is absurd.