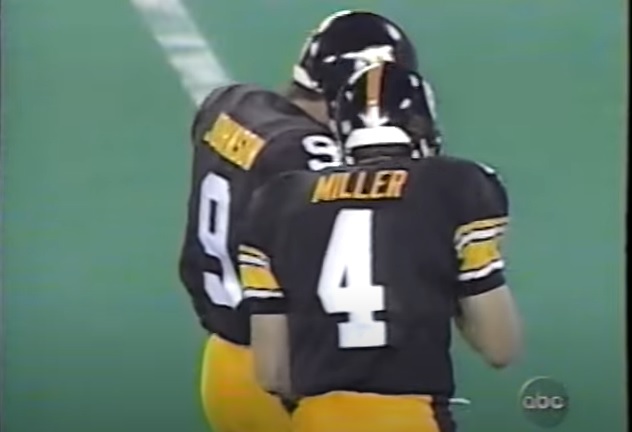 As Dave Bryan discussed in a recent Terrible Take, the Pittsburgh Steelers are shaping up to start two rookie offensive lineman to begin a season for the first time in over 50 years. Dan Moore Jr. at left tackle, Kendrick Green at center. But that’s not the only new or weird lineup stat the Steelers have when they travel to Buffalo Week 1. They’ll have a new long snapper and new punter/holder, Christian Kuntz and Pressley Harvin III, making the first time that’s happened in 25 years.

The last time Pittsburgh debuted a season with a new punter and holder came back for the 1996 season. That year, they used veteran Jim Sweeney as the team’s snapper and rookie Josh Miller as the punter, recently released by the Seattle Seahawks.

The year before, the team used Kendall Gammon as their long snapper. The Steelers were his first team, spending four years with the club from 1992 to 1995 before signing with the Kansas City Chiefs for the 1996 season. In 2004, he’d become the first pure long snapper to be named to the Pro Bowl. Prior to that, the starting center or other reserve offensive lineman pulled double-duty as the team’s snapper; for many years, Mike Webster held that role for Pittsburgh. And in ’95, Rohn Stark, his one year with the team, served as the Steelers’ punter and holder. His 40.1 yard average was nearly a career low and the Steelers moved on the following year.

It wasn’t until 1999 the team found a long-term, true long snapper in Mike Schneck, who served in that role from 1999 to 2004. He was replaced by Greg Warren, the team’s snapper until 2016 (sans timed missed with two ACL tears) before Canaday beat out draft pick Colin Holba for the job in 2017. Now, it’s Kuntz’s responsibility.

This is as quirky and unnecessary “stat of the weird” as they come but it’s also kinda interesting. And maybe a bit concerning. Chris Boswell had Jordan Berry and Kameron Canaday as his holder and snapper for several seasons. Now, both are gone and replaced by two guys who’ve never done it on Sundays. To be fair, Kuntz and Harvin have snapped well. But the snap-hold-kick is, as Danny Smith refers to it, an operation. And 2/3 of that operation has changed. Smith admitted the obvious that it’ll be a challenge to begin the year.

“That’s always a challenge,” he told reporters via team transcript earlier in the week. “It’s new. We’ve got time to work it, and we have, and we will. We’ll be fine. I’m comfortable with it.”

Maybe – hopefully – it has no impact on Boswell at all. He, as you’d expect, praised the job of all the specialists in camp. He’ll get used to Kuntz and Harvin just in the way he adjusted to Warren and Berry and then Canaday and Berry (and even Dustin Colquitt for a brief time last year).

But just in the way it’s notable all the “newness” of the Steelers’ offensive line, Pittsburgh has high turnover with its specialists. Hopefully, this will remain a quirky fact and not something to be reminded of mid-season, which will happen if snapping or holding issues prove costly.