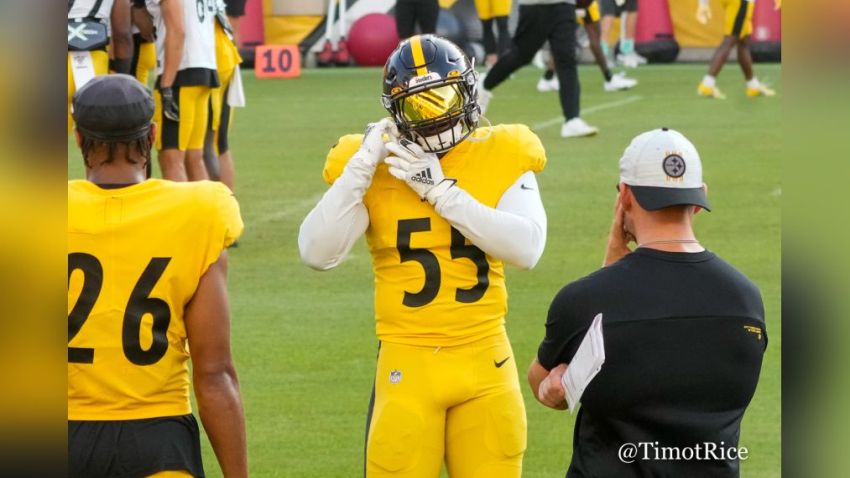 After a groin injury kept LB Devin Bush from playing in the Steelers Week 2 loss at home against the Las Vegas Raiders, it was a sigh of relief to have both he and CB Joe Haden cleared to play against the Bengals. The defense was still short-handed with the likes of T.J. Watt and Alex Highsmith out with their own groin injuries as well as DL Carlos Davis with a knee and Tyson Alualu suffering a factored ankle that put in on the IR. Those losses were noticeable on Sunday as the Steelers defensive front had trouble stopping the run game and establishing the LOS.

In return to play, Bush recorded two total tackles while playing 38 defensive snaps. Coming off of the groin injury, the concern was that Bush would have to knock off some rust and could be less effective. Knowing this, there were still some moments where Bush flashes his elite athleticism as a sideline-to-sideline linebacker like on this play where #28 Joe Mixon takes the handoff on the outside zone run to the right. Bush recognizes the play and closes down on the line, keeping his shoulders square to the LOS as he reads Mixon and whether he is going to take it to the sideline or cut it back up field. Bush wraps him up as he tries to cut up the field, limiting Mixon to a one-yard gain.

This is a great play by Bush in terms of technique playing with his shoulders square and containing the run by not over pursuing the ball. Bush also made an impact in pass coverage Sunday thanks to his athletic ability to run with receivers. On this INT made by #34 Terrell Edmunds, Bush is tasked with covering WR#83 Tyler Boyd in the slot. Bush picks up Boyd as he runs past the first down marker, opening up his hips as Boyd gets an outside release and continues to run vertical. Bush stays tight on his backside and gets his hand in the face of Boyd as he attempts to bring in the jump ball, getting batted by #39 Minkah Fitzpatrick to Edmunds for the pick.

While there were some bright spots in Bush’s film from Sunday, there were plenty of concerning moments as well that suggest there was a transition period coming back from the groin injury. Bush seemed tentative at times flying to the football as a run-and-chase defender, and there were several other instances where it looked like he was over pursuing on the play. For example, Mixon takes the handoff here on first down and easily gets six yards on the play, getting to the second level relatively untouched. Sure, #93 Joe Schobert likely has the gap Mixon is running to as Bush looks to be running to contain the sideline, but he can ease off the gas a little to be in position to help.

Here is another example later in the second half where Bush is flying to the sideline to contain the outside but fails to recognize Mixon hitting it up the middle as he runs by, taking himself completely out of the play as Mixon makes a couple of defenders miss and picks up first down yardage. Bush needs to play with better awareness as a defender freed up in the second level to make these plays and prevent big runs.

Here is a positive example of what Bush should be doing in these situations. Watch as he initially starts running down to the bottom of the screen but keeps his eyes on the back who cuts back to the right. Bush pushes off his right foot to transition back to his left and make a play on Mixon crossing the LOS, limiting him to a minimal gain.

Another problem with Bush’s game Sunday against the Bengals was his in ability to work through/around blocks. It was highlighted coming out of Michigan during the draft that Bush isn’t the strongest taking on blocks by offensive linemen head-on due to his lack of size. However, his speed and pursuit were a means of working around blocks by taking good angles to the football. However, Bush gets covered up several times in this game including this play below where he flows down the line on the zone run right into C #66 Trey Hopkins who picks him up and drives him out of the way to spring Mixon for his longest run of the day for 27 yards.

Alex Kozora pointed out on Twitter after the game that not only Bush struggled to get off blocks, but he made some bad decisions when he attempted to get around the block. Watch this play as Bush takes the right angle to his gap in-between the LG and C, but once #67 Quinton Spain picks him up, Bush panics and tries to spin off of the block, discontinuing his pursuit and shows his back to the play as Mixon his Bush’s gap for another successful run.

Along with struggles filling properly against the run, Bush had his issues in pass coverage as well against Cincinnati. Obviously, it’s hard to expect Bush to adequately cover WRs from the LB spot as the Steelers defensive scheme asks him to do quite often. But there are still some key things that stick out that Bush needs to do better as a pass coverage defender.

On the touchdown pass here to Tyler Boyd, Bush lines up outside of the box giving outside leverage to Boyd who runs the whip route, getting a step on Bush in separation to match the catch. However, Bush fails to wrap up Boyd by the waist as #8 Melvin Ingram goes for the knockout hit, overrunning Boyd who bounces off and runs in for the score. It’s hard to expect Bush to remain in lock step with Boyd on a route like that, but he needs to be more disciplined after the catch and wrap him up to keep the first down from becoming a touchdown.

Another thing that stuck out to me about Bush in pass coverage was how soft he plays in zone. I understand keeping everything in front of you as a defender and not getting beat deep, but there were several instances Sunday where Bush seemed hesitant to click-and-close once the ball was thrown to contest the pass. Watch this pass completion to Boyd over the middle of the field with Bush sitting five yards away in the middle of the zone, watching #9 Joe Burrow lock onto Boyd and throw it to him without moving his feet until he catches the ball. Bush does a good job escorting Boyd out of bounds, but I’d like to see Bush be more aggressive in pass coverage.

Overall, it was great to see Bush back on the field after missing the last game, but his impact wasn’t exceptional in the loss to the Bengals. While we can say that he was playing without several front-line defenders in front of him making his job more difficult, he is expected to make plays as the high-end prospect Pittsburgh traded up for in the 2019 NFL Draft to get. Bush gets a lot of flak for his lack of splash plays, and while turnovers aren’t everything for the inside linebacker position, there were several instances Sunday where Bush failed to make the “routine plays routinely” as Mike Tomlin likes to say.

Hopefully, Bush is able to improve his performance and consistency moving forward as he get farther along from the groin injury and as more defensive pieces are added back to the ailing defense. Still, I hope to see Bush take his play to another level going forward this season as he will have to if this defense is going to play the way it has to in order to make up for the lack of production on the offensive side of the football.

What are your thoughts on Devin Bush’s performance against the Bengals? Do you think he performed well in his return from injury, or are there concerns with his consistency and performance that you notice from the tape? Do you think he is capable of having a bigger impact on the defense to live up to the #10 overall selection from the 2019 NFL Draft? Please leave your thoughts in the comments section below and thanks again for reading!