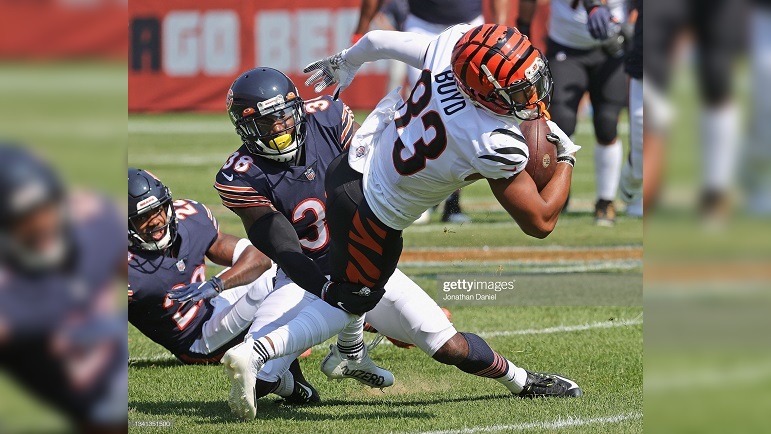 As of Saturday morning, it appears as if the Cincinnati Bengals as well as the Pittsburgh Steelers will be short-handed in the receiver core for the divisional matchup. Diontae Johnson has already been ruled out due to a knee injury suffered against the Las Vegas Raiders last week, and Tee Higgins has been listed as “Doubtful” by the Bengals injury report with a shoulder injury. This will likely mean that either Auden Tate or Mike Thomas will step up in three WR sets with Ja’Marr Chase and Tyler Boyd.

Chase has drawn a majority of the media’s attention this offseason as the 5th overall selection in the 2021 NFL Draft in comparison to Boyd. He also was heavily scrutinized for his bevy of drops in the preseason and training camp, but has sense rebounded to the tune of 11 targets, seven receptions for 155 receiving yards (22.2 YPR) and two receiving TDs. He has picked up where he left off coming out of LSU as a downfield threat defenses have to aware of, having both his TDs come over 40 yards. There is no denying that Pittsburgh will have to prioritize keeping a lid on Chase to avoid getting beat deep Sunday like they did last week against the Raiders.

However, Tyler Boyd is the receiver that has ample experience playing against Pittsburgh and could be just as much, if not more of a threat to take advantage of the Steelers’ secondary in this matchup. Boyd’s performance thus far this season isn’t as glamorous as Chase, recording ten receptions for 105 yards (10.5 YPR) and no scores. However, he has had several impressive games against Pittsburgh in years past, including a 5-101-1 effort in 2019 and a 7-62-2 output in 2018. He is a savvy route runner from the slot that can also play out wide and creates separation effortlessly out of his breaks like we see on this reception against #44 Marlon Humphrey last season, one of the top corners in the league.

Boyd has proven to be a mismatch in the slot when safeties and linebackers are tasked with covering him man-to-man. Back in their 2019 matchup in Cincinnati, Boyd had his way with #34 Terrell Edmunds in coverage. Watch this pass play where Boyd runs the quick out from the slot, challenging the inside leverage of Edmunds initially, but then cuts out to the right toward the sideline, giving #5 Ryan Finley an easy target for the pitch-and-catch first down.

Boyd is often labeled as a possession style receiver that lacks the athleticism to win downfield with speed. While his testing numbers may agree with this generalized statement, the tape tells a different story. Boyd has several moments on film that jump off of the screen where he wins down the field and makes acrobatic catches in the air against contested coverage. Pittsburgh knows this all too well going back to that same 2019 matchup where Boyd takes Edmunds vertical up the seam and hauls in the deep ball with one hand, corralling it with Edmunds having an arm holding down Boyd’s right arm and having his left contest the pass.

Here in the same game, we see Boyd line up on the outside at the bottom of the screen against #23 Joe Haden. Boyd runs the sluggo route to the end zone, using his body to box out Haden in the paint as he elevates for the jump ball by Finley, coming down with the TD grab. This just goes to show Boyd’s versatility and ability to win both inside and outside in a variety of ways.

Another underrated part of Boyd’s game is his willingness to get his nose dirty in the run game. Alex Kozora did a wonderful job breaking down Boyd’s effort as a run blocker in their matchup from last season which can be seen on this clip of Boyd taking on #20 Cam Sutton in a tight formation. He locks on with Boyd and holds his block long enough for #25 Giovanni Bernard to get lose to the second level of the defense for first down yardage. If the Bengals hope to get their ground game going this week with Joe Mixon, Boyd will be able to have an impact as a blocker on the outside.

Why could Boyd be the receiver in-line for a big game over the likes of explosive rookie Ja’Marr Chase? Well, for starters, the Bengals likely have watched the tape of the Raiders game and took note on how Las Vegas utilized #13 Hunter Renfrow against the Steelers and try to replicate that success with Boyd. Watch Renfrow on this play where he aligns in the stack formation on the right and runs the quick timing route to get the ball on the curl back inside. This allows Renfrow to get upfield quickly after the catch, picking up extra yardage as #42 James Pierre takes a bad angle to the football which Renfrow exploits for first down yardage.

Cincinnati will likely look to get an advantageous matchup with Boyd in coverage in the slot. Using Chase on one side and either Tate or Thomas on the other side, there is a good chance Boyd will get to see rookie DB #21 Tre Norwood a fair amount in the slot which should be seen as a plus matchup for Boyd. Las Vegas felt the same way last week and took advantage of the young rookie in coverage with Renfrow. On this play, Renfrow aligns in the slot on the empty trips right formation against Norwood. He hits the stutter-and-go up the seam, getting Norwood to hesitate, thus getting a step on him as he snags the ball for the tough catch outside his frame.

Overall, it will be interesting to see how Pittsburgh plans to cover Tyler Boyd both on the outside and from the slot should teammate Tee Higgins can’t go Sunday. You would figure that Haden will be assigned Ja’Marr Chase with Minkah Fitzpatrick providing help overtop. The Steelers have used Fitzpatrick to bracket Boyd in the past but given the long TD the gave up last week to Henry Ruggs, they may opt to keep everything in front of them and not allow Chase to get loose deep. Sutton could kick inside on occasion to cover Boyd, but Norwood or Terrell Edmunds may get significant snaps against him on as well. Should they limit Boyd’s impact to near the LOS, Pittsburgh should succeed against Boyd Sunday.

What are your thoughts on Tyler Boyd’s impact in this game? Do you think that he is less of a factor as Ja’Marr Chase and Joe Mixon, or do you see him as a legitimate threat? How Should Pittsburgh look to play in him in coverage with the options they have available? Please leave your thoughts in the comments section below and thanks again for reading!