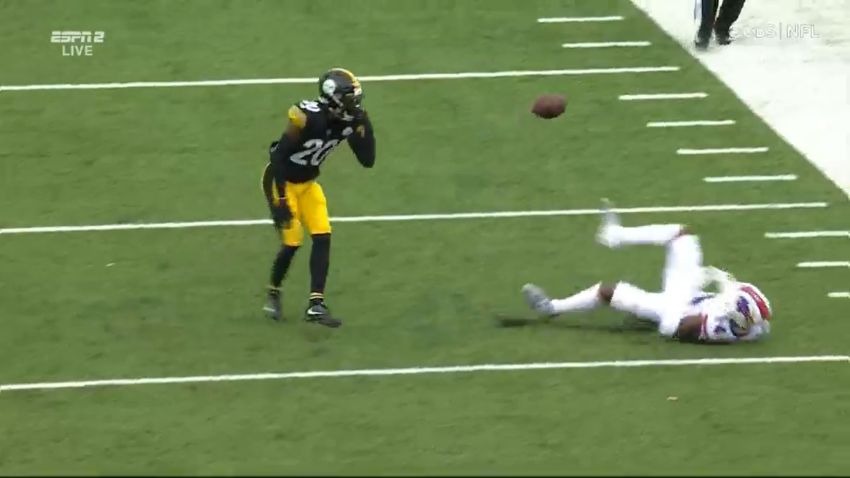 The Buffalo Bills, leading the entire game, took chances to try and put away the Pittsburgh Steelers on Sunday. Twice in the second half, the Bills went for it on fourth downs, on fourth and eight from the Steelers’ 35 yard line, and then on fourth and one from the Steelers’ 41. Both times, the Steeler defense came through with stops that gave the ball back to the team, and more importantly, prevented the Bills from adding to their lead.

The defense kept Pittsburgh in the game with the Bills until the Steeler offense finally broke through in the fourth with a touchdown pass to Diontae Johnson to make the game 13-10. Pittsburgh added a big special teams touchdown less than two minutes later to go up 20-10 and get the momentum to lead the rest of the way to a victory, but much of the credit for the victory went to the team’s defense for not just its early-game performance, but the big moments late that helped set up the scenario for the offense to come through for the lead.

“Fourth down and then, you know, those turnovers were huge for us,” Cameron Heyward said after the game. “Um, the turnover, one turnover. But you know, we looked at those [fourth downs] like turnovers, and we looked for us to capitalize on them.”

The Steelers had one turnover in the first half, when T.J. Watt forced a fumble on a sack of Bills’ quarterback Josh Allen. The Steelers went three and out on the ensuing drive, failing to capitalize on the change of possession. On the first of those two fourth-down stops in the second half, Pittsburgh came through with some points on a Chris Boswell 20-yard field goal, but couldn’t come through with the touchdown instead, getting to the Bills’ two-yard line before sending out Boswell.

It was the second fourth down stop where the Steelers finally benefitted in full, with Johnson’s touchdown catch. It was a moment for the offense to celebrate, but also for the defense to do so after setting up that drive when Cameron Sutton stopped Bills’ running back Matt Breida in the backfield on a strange fourth down pitch play. Sutton was also in coverage on Gabriel Davis on the prior fourth down failure on a pass Davis’ direction.

“We practice all week. We know what we’re looking at. It comes down to execution,” Heyward said. “Even when we gave up the touchdown in the first half, we were like, ‘Damn, we were right there.’ We felt good about it. And we were able to adjust and keep going.”

The Steeler defense gave up 371 total yards of offense in the game, but kept Buffalo out of the end zone all but one time, when Davis scored on a pass from Allen with 22 seconds left in the first half. It was enough for the team to secure the win, with big performances from the like of Watt, Heyward, and Sutton giving the team momentum as Pittsburgh continues on to Week 2, its home opener on Sunday against the Las Vegas Raiders.