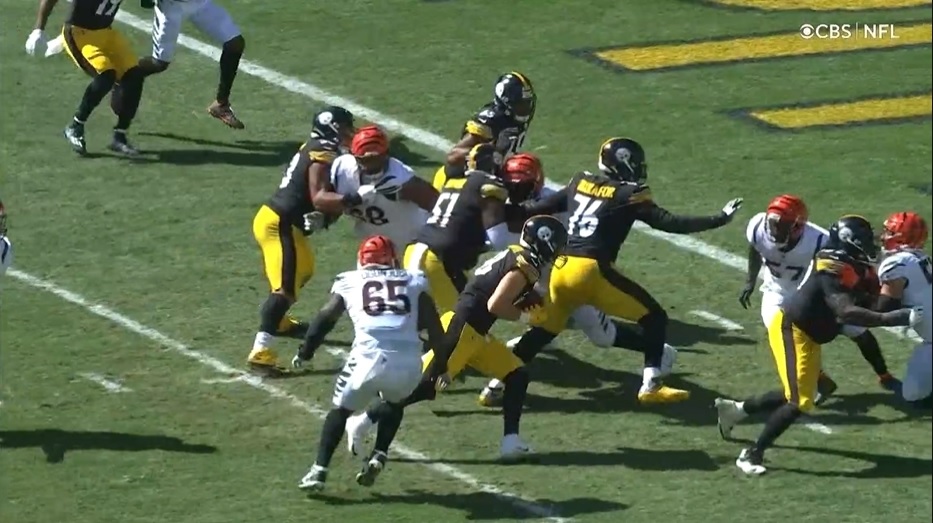 After today, it’s really more like “stats of the depressing.” Some wild, soul-crushing ones to pass on to you guys today.

– Here’s my favorite weird stat of all. Najee Harris’ team is 1-2 on the year. It’s the first time a team he’s been on has had a losing record since his freshman year of high school, September 2013 at Antioch. That year, his team won the first game of the year and dropped the next two, falling to 1-2 on September 13th. They would go on to lose the rest of their games and finish the year 1-9.

Since then, the rest of his high school career and of course, his time at Alabama, Harris’ teams were never any worse than .500 at any point of the year. Until today, that is.

– As the CBS broadcast noted (and FWIW, it was a stat I was researching before they aired it), the Steelers lost consecutive regular season games to the Bengals for the first time since the 2012-2013 season. Under Mike Tomlin, it’s happened just one other time in 2009, when they were swept during the regular season.

– The Bengals’ offense ran only 42 plays today, the fewest needed to defeat the Steelers since the Tennessee Titans had just 39 in a 2003 win. Previously, the fewest plays needed to beat Mike Tomlin was 51, done by the Vikings in a 2013 victory overseas in Wembley Stadium.

– Najee Harris’ 14 receptions today set a Steelers’ record for most catches by a RB in a single-game. That breaks Jaylen Samuels’ mark of 13. That number would’ve been higher had it not been for three drops.

Harris’ 19 targets are the most by a RB since Alvin Kamara had 20 for the Saints in September of 2018. They’re the most by a Steelers’ RB since at least 1992, as far back as the stat is tracked, and tie for the second most by any Steeler, runner or receiver, over that time. Only Antonio Brown’s 23 in 2015 were more. Le’Veon Bell was never targeted more than 14 times in a game.

Through just three games, Harris has 20 catches, putting him nearly one-third of the way to tying Chase Claypool’s rookie reception record of 62.

– Pat Freiermuth’s first college TD? A five-yard score on 1st and goal in the second quarter.

– Pat Freiermuth’s first NFL TD? A four-yard score on 1st and goal in the second quarter.

– Ben Roethlisberger was sacked four times in this game, the first time that’s happened since Week 1 of the 2018 season. He’s been dropped eight times in three games after being sacked just 13 times in 15 contests in 2020.

– Long-time coming for WR Cody White, who caught his first pass in a game that counted since December 27th, 2019, his final game at Michigan State.

– Eric Ebron’s been targeted seven times this year. He has one catch. He has more drops than receptions.

– Every Steelers’ starting offensive lineman was penalized at least once today. I don’t know the last time that happened but I bet it’s been a long time.

– Entering today, Chris Boswell was a perfect 53/53 on all field goals against the Bengals. He had his first miss Sunday, a 42-yarder that pulled left.

– Joe Burrow threw three TDs on just 18 attempts today. He’s the first QB to throw three scores on fewer than 20 attempts since the late Steve McNair did in 2003, going 15/16 for 161 yards and three touchdowns in a 30-13 win over Pittsburgh.

Since the Immaculate Reception, the only other QB to do so versus the Steelers was Lynn Dickey in 1983.

– Finally, mercifully, the Steelers possessed the ball for 35:22 today and lost. It’s their highest TOP in a loss since that aforementioned 2013 loss to Minnesota in London, when they held the ball for 36:27.