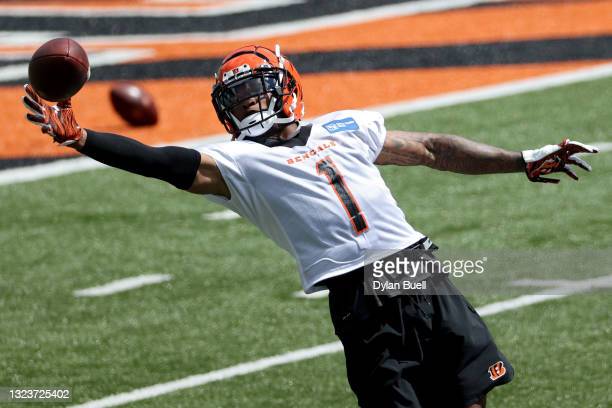 A run game led by a familiar face, RB Joe Mixon. To me, one of the league’s most underrated running backs. And one of its workhorses. Even moreso with Gio Bernard gone to Tampa Bay, Mixon has been *the* guy in the backfield this season. Mixon has 49 carries over the first two games, second most in the league only behind Derrick Henry. Mixon is also second in yards with 196. Backup running back Samaje Perine has just five carries. Mixon’s 80.6% snap count is second highest among running backs. Only Najee Harris, at 97.5%, is higher.

Mixon is averaging only four yards per carry so he hasn’t been overly effective with his chances. But he’s the #1 guy in this backfield. WR Ja’Marr Chase has a rush on a jet motion run but it went for a loss of tow yards.

Schematically, it’s a varied run scheme that doesn’t have one core concept. Here’s inside zone.

And here’s a split zone with the FB sort of acting as window dressing in a sense, going away from the running backs path. He takes on the EMOL like a split zone block would be, a tight end/H-back coming across the line, but it fools the linebackers who are keying his path and get them slightly out of position.

They don’t have an official fullback but use their tight ends in that capacity, as they did for many years with Ryan Hewitt. This offense has five runs of 10+ yards, which sits about middle of the pack so far. Sample sizes here are still small, though.

Some other offensive numbers. The Bengals have scored just 41 points in regulation over the first two weeks and an additional three in a Week One, OT win over the Minnesota Vikings. This is an offense that’s struggled on third down, converting just 34.6% of the time. That’s tied for 23rd in the league. But they are doing well not to beat themselves with penalties. Just seven of them, third fewest in the league.

Joe Burrow returns after tearing his ACL midway through last season, missing the team’s second game against the Steelers (better known as the Ryan Finley Debacle). Burrow has played relatively well after concerns about his knee in the preseason. He’s completing over 68% of his passes with four touchdowns but also has three picks and has been sacked nine times already. Five by the Vikings, four by the Bears.

Tyler Boyd and Tee Higgins are the team’s leading receivers with ten catches each. Higgins is in danger of missing this weekend’s game with an injury. Overall, they do a nice job spreading the ball around. Boyd is more of the underneath guy, the team’s primary slot receiver, with Chase being the deep ball threat. Two of his seven receptions have already gone for 40+ yards and he’s responsible for two of the team’s five grabs of 20+ this season. He’s averaging over 22 yards per grab so far.

Higgins and Chase are tied for the team lead with two touchdowns.

Schematically, they came out in a lot of empty against the Bears. It’s one reason why Burrow has been sacked so much. Behind an offensive line that’s trying to be built up, Burrow has taken a lot of punishment, similar to what’s going on with Ben Roethlisberger. Narrowly avoids the sack here.

Often, in empty and 3×1 looks, Burrow will look to the boundary with the X receiver, who runs his route based on the CBs leverage. CB with outside leverage = slant. And sight adjustments to run a curl if he can’t win deep.

In their meeting last season, Pittsburgh’s gameplan against Burrow was clear. Force him to throw to the field and outside the numbers. His arm is pretty weak relative to the rest of the league. The Steelers played a ton of trail technique in 2020’s matchup, bracketed Boyd, and forced Burrow to throw to the sidelines. I think they employ a similar strategy this time around. 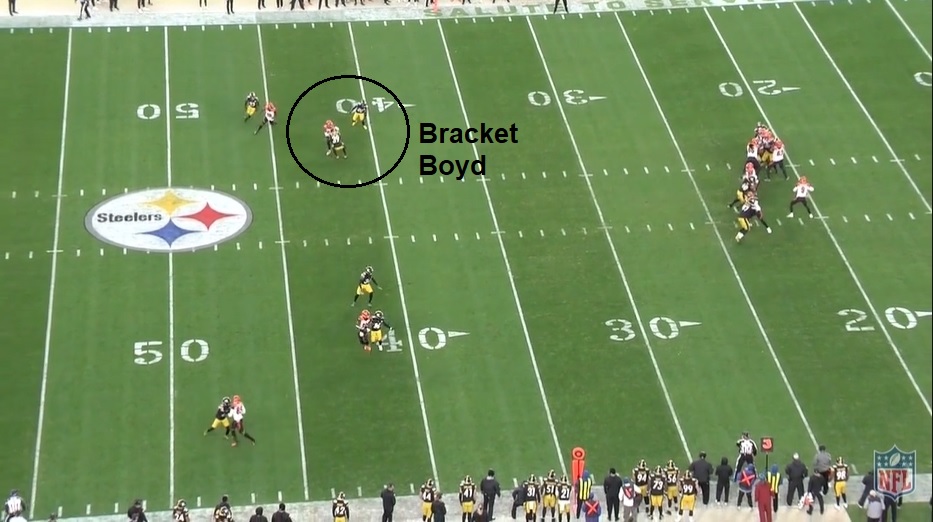 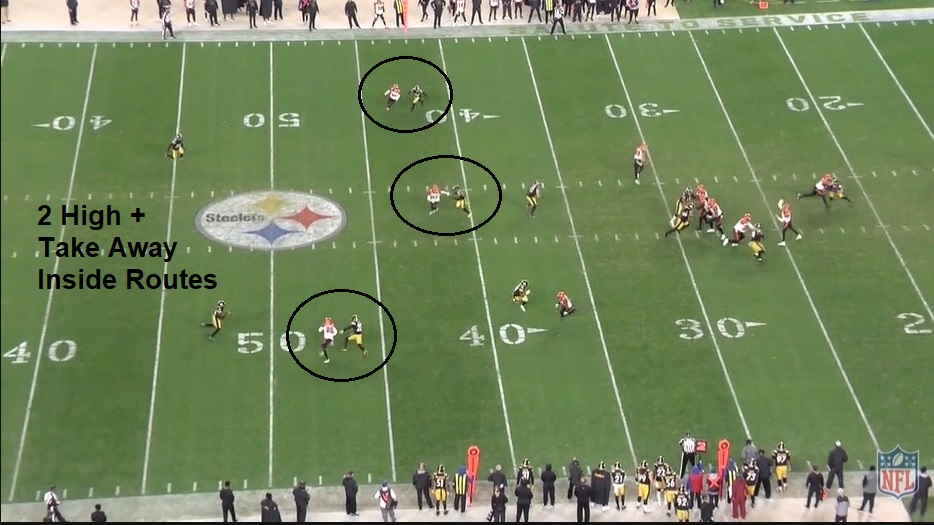 Coming off of a tough Week 2 loss to the Las Vegas Raiders at Heinz Field, the Pittsburgh Steelers look to get back on track at home as they welcome the familiar AFC North foe Cincinnati Bengals to the north shore for a big divisional matchup.

The last time these two teams met the Bengals upset the Steelers in Cincinnati riding the legs of former quarterback Ryan Finley. Ahead of the Week 3 matchup, the Steelers have to prepare for second-year quarterback Joe Burrow for the second time, having faced off with him in Week 10 — a game in which the Steelers dominated on the way to a 36-10 win.

Ahead of the Week 3 matchup with the Bengals, things feel relatively the same offensively for Cincinnati, albeit with a few interesting wrinkles.

The offensive line is a bit improved, at least on paper, and the skill guys remain arguably the best in the division led by second-year receiver Tee Higgins and steady veteran Tyler Boyd.

Burrow is the straw that stirs the drink though for the Bengals. Coming off of that devastating knee injury, Burrow looks like he’s a bit less athletic than he was in his rookie season, though he’s still not a full year recovered at this point.

He can still throw the deep ball though, and his having fun connecting with his former college teammate in Ja’Marr Chase.

With Chase, he can run right by any defensive back, especially with a free release like he was given here in Week 1 against the Minnesota Vikings. Burrow has the touch and accuracy to drop it right into the bucket downfield for Chase to put points on the board.

Where the Bengals have added more things this year with Burrow is in the RPO game. I’ve seen them run it more on tape this year than I remember them running it at any point leading up to that Week 10 matchup with the Steelers in 2020.

Burrow is very smart in the RPO game. He is able to manipulate defenders with his eyes and is not afraid to squeeze a throw into a tight window like he did in Week 2 against the Chicago Bears on the road to Tyler Boyd.

Watch the way he manipulates Roquan Smith here by eyeing CJ Uzomah on the option route, sucking Smith upfield to clear a path for Boyd.

The thing I’ve been really impressed by Burrow with is his poise and patience in the pocket, even coming off of a knee injury suffered on a hit in the pocket.

Here in overtime against the Vikings in Week 1, Burrow knew exactly where the ball was going, and he showed poise and patience to stand in there off of play action and drop a dime to Uzomah on the run, setting up the game-winning field goal.

With Burrow firing on all cylinders, the Bengals are dangerous offense. While they’re coming off of a tough performance against a good Bears’ defense, there’s plenty of talent and explosion here on offense for the Bengals under head coach Zac Taylor.

It helps giving Burrow an insane amount of weapons at receiver with Boyd, Chase and Higgins.

Higgins has really come on strong as a second-round draft pick. He’s a legitimate deep ball weapon and has really developed into a talented possession receiver that can create some YAC.

Boyd is the tough, physical slot receiver a la JuJu Smith-Schuster, while Chase is the homerun threat. The trio fits together perfectly.

In the backfield, I’m a big, big fan of Joe Mixon. He’s quietly a top 10 running back in the NFL, one that has great power and quiet speed that can catch defenders off guard. He’s a terrific receiving option too.

I loved this design against the Vikings in Week 1, motioning Uzomah to the strong side of the field to give the Bengals two tight ends that side. Then, the Bengals pulled right guard Xavier Su’a-Filo out into space, giving Mixon a lead blocker on the toss sweep, chewing up chunk yardage for the Bengals.

He’s gotten off to a strong start in 2021 with 196 yards on the ground through two games and is a key focal point for the Bengals’ offense.

The Bengals are able to do a lot off of play action when Mixon is running well. Against the Vikings I really liked this concept they worked up, creating a wide open throw for Burrow, who just missed connecting with Mike Thomas for the big play off the fake pitch, getting Thomas on the flag route.

At tight end, I like Uzomah a lot. He’s a good blocker and is an underrated receiving threat, both up the seam and in the red zone. He always has success against the Steelers. Backup Drew Sample is a strong blocker and had a really good rookie season, catching 40 balls for the Bengals.

The offensive line remains the concern for the Bengals, though things have improved slightly. Here’s how I expect them to line up left to right on Sunday:

I like the tackle duo of Williams and Reiff, but they could have issues with the Steelers’ speed and power off the edge. Inside, I love Spain in the run game and he quietly has played well in pass protection.

I’m not much of a believer in Hopkins, but he’s an athletic center that can get to the second level and can get out in space in the Bengals’ scheme.

Right guard will be the fish of the week for the Bengals with Su’a-Filo expected to miss the game after missing practices Wednesday and Thursday with a knee injury. Rookies Jackson Carman or D’Ante Smith could start in place of Su’a-Filo, with Carman the best bet as a run blocker.

On special teams, the Bengals seem to have found their kicker of the future in rookie Evan McPherson. McPherson has a monster leg and is a bit of a trick-shot artist during his time at Florida. He was named the AFC Special Teams Player of the Week after kicking the game-winning field goal in Week 1 over the Vikings.

Veteran punter Kevin Huber remains in Cincinnati and continues to get the job done as a solid punter. However, the Bengals gave up a ton of pressure in Week 1 on punts. The Steelers could dial up a punt block on Sunday.

Kick returner Brandon Wilson has had a really rough start to the season, dropping a kickoff in the end zone and being pinned deep inside the Bengals’ 20 twice to start the season.

Punt returner Darius Phillips is as dangerous as they come, especially with his history of returns in college. He hasn’t broken one yet in the NFL, but he’s been close numerous times.