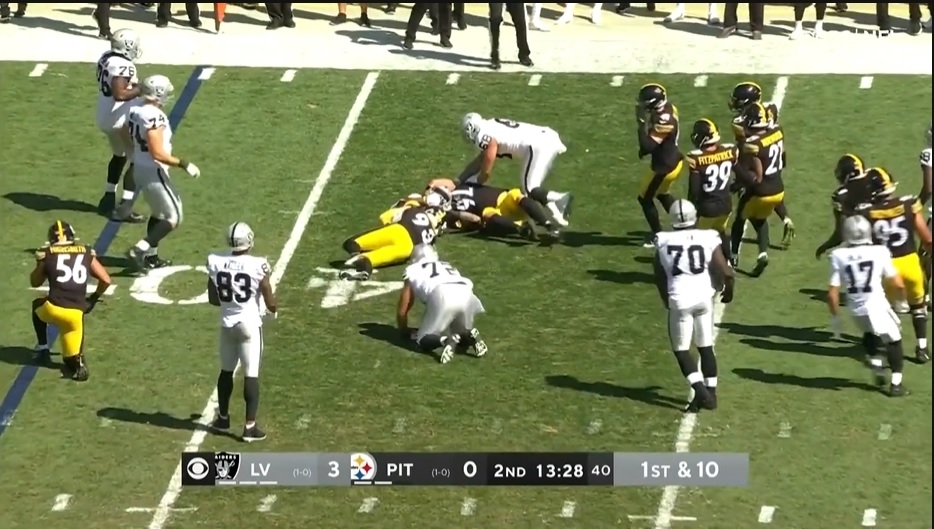 Harris found the end zone for the first time in his career on just 15 touches. He had a couple of nice runs of double digit yards and showed good patience and understanding of where the blocks should be coming from. He was able to make about 5 people miss on tackles and continued to add yards after contact.

As a receiver from the backfield he ran Curl, Out, Flat and Swing routed and when lined up in the slot he ran Flat and Corner routes.  He caught all five of his targets highlighted by the mushing, stiff arm given to Johnathan Abram and turning a short pass into a 25 yard touchdown.  The majority of his receiving yards were gained after the catch.

In pass protection he had a handful of reps that ended in attempts to chip on the edge and all but 1 were less than effective not getting much push or slipping off the defender. His final rep connected and spun the defender around and had another good rep assisting the tight end.

Freiermuth got the start again playing four more snaps than the previous game. He lined up everywhere in this game except the backfield. Inline, wing, slot and outside and his routes included Flat, Curl, Stick, Skinny Post, In and Shallow Cross.  His hands are really sticky and can pluck the ball easily out of the air.  His first catch was on a Stick route, second on a curl versus Zone, followed by a Shallow Cross and Whip route. Really liked seeing him add yards after the catch on all but one reception.

As a blocker, I really liked his effort to work through and around the traffic to get to his block on wham/slide blocks.  I did see him whiff on one cut block. On Harris’ first big run he did a nice job finding his man and sealing so Harris could run behind him. He was adequate as a run blocker with some good and some needing work.

The rookie offensive linemen miss their block here but watch Freiermuth (88) work through the traffic to make the kick out block while Harris (22) shows the patience to wait for him on this big gainer.

In pass protection, Green looked solid overall.  When uncovered he was solid looking for work to help out teammates.  With a man over him he showed a good, quick punch and lateral agility to stay in front.  He was better anchoring against power rushers but did get bent back one time. His awareness on twists was up and down. Saw a good rep early on and later in the game he turned outside to quickly allowing a looper a big shot on the QB.

As a run blocker he showed the speed and mobility to get outside but could use some work on angles. His aiming point on run blocks to his sides can get a little deep leaving the defensive lineman a chance to get into the gaps. Would like to see more consistent pad level and leg drive on blocks.

One play after having words with the 340 pound defensive tackle Johnathan Hankins, Green tosses him to the ground.

Moore once again got the start at left tackle and had a pretty solid game. In the passing game, he was comfortable in his kick slide and got good depth versus edge rushers.  He uses his hands well to chop at the attacking arms of defenders.  He did a nice job against speed rushers up the arc pushing them past the quarterback. He showed good awareness on stunts and good lateral agility to slide inside on counters. I would like to see him work on anchoring a little more quickly before he gets in the lap of the quarterback.

As a run blocker he was also solid showing good mobility to get out in space and getting solid push on kick out blocks. His stance is very narrow and I wonder if that could hinder him a bit as he will lead with his head on some run blocks and get over his toes.

Loudermilk got a helmet this week with Carlos Davis unable to go and ended up getting more snaps than expected with Tyson Alualu went down. He showed some alignment versatility lining up from the 2i out to the 7 tech.  It didn’t take long for him to get in on a tackle, assisting on his first NFL play.

He showed some positives mixing in a rip and bull rush when rushing the passer, was solid setting the edge and had a nice stack and shed late in Q3. He looked a little slow at the snap, got driven back versus a double team block and needs to work on his technique as a looper.  Also, would like to see more active hands when pass rushing and countering.

Here is Loudermilk’s first play and tackle. He’s lined up just inside the left guard and stays square through the combo block, staying engaged with the center while working to his right to stay with the runner and get in on the stop

It was a tale of two halves when it comes to alignment for Norwood. He spent the majority of the first half playing free safety and was primarily in the nickel corner position in the second half. As a safety he plays safely getting a lot of depth but reads and reacts well and showed some good communication as also.

He had solid man coverage on the TE on a slot fade late in Q3 and really liked his aggressiveness to attack the bunch screen and clog at the line of scrimmage. He had good awareness in Zone reading the quarter back. He collided with Ahkello Witherspoon on a play but luckily the pass fell incomplete. He stood out on one play versus the run you’ll see below giving up his body to make the stop.

Norwood (21) is lined up a linebacker here (left side) and will give up his body to come up and fill and frankly gets blasted by the fullback but makes the stop.  Love seeing this.

After and up and down game in week one Harvin looked much better in week two.  His first punt was short, just 38 yards, but was fair caught at the 16. Punt number two was a field flipper travelling 59 yards from the 33 yard line. Punt three was a 42 yard punt that was not returned and the final punt also flipped the field going 58 yards from the 34. He also handled all snaps on field goals and extra points without incidence.