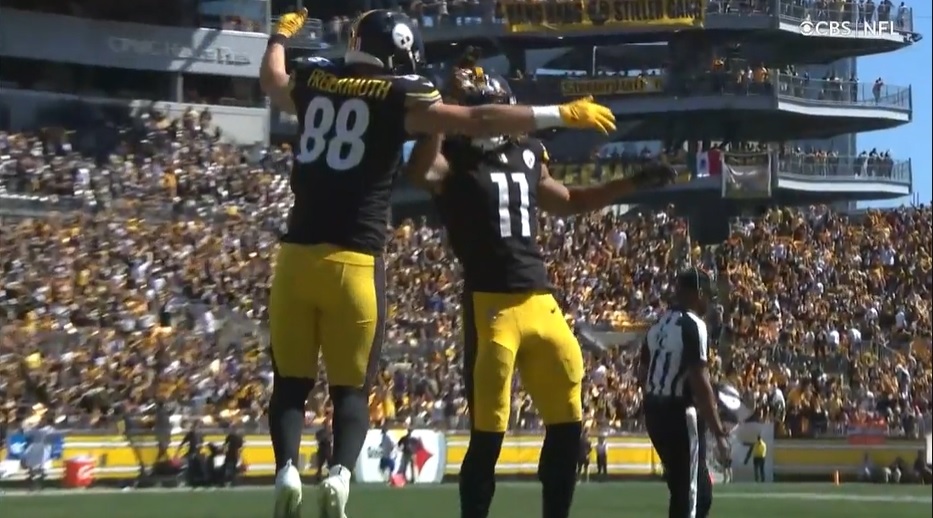 Harris had a record setting day with 14 receptions and also topped one hundred yards receiving but the running game was still ineffective.  Harris also had four drops in his 19 targets.  The first two looked like he took his eye off it to try to get up field while the other two looked like he was just plain exhausted. All of his routes were of the curl, sneak, swing and flat variety essentially check downs and he was able to create yards after the catch.

Trying to run into the middle, the strength of the Bengals defense, led to subpar numbers overall.  He had a few runs to the outside called back but on his successful runs he showed good acceleration and mental processing to set up his blockers in space.

Freiermuth had fewer snaps than Eric Ebron but had better production on the day including his first touchdown.  His routes included drag, curl, short in, deep in, corner, seam and stick. His first reception was a smart route on a delayed release finding the soft spot in the zone for three yards to convert the first down.  Reception two was a drag route behind the line of scrimmage taking the short toss and lowering his shoulder to get into the end zone for 4 yards.  His final reception came on a short pass to the left that he turned into a 15 yards gain. He was wide open over the middle on the miscommunication end zone throw to Chase Claypool.

His other target included a deep out to the left that the sure handed receiver dropped and a short pass to the left. He also had a nice one handed snag for no gain that included an offensive pass interference play so it was nullified. He was solid in pass protection in a few opportunities and in run blocking on the first and second level.

The offensive scheme called for a lot of down and double team blocks by Green and for the most part he was successful.  He showed solid ability to get outside on screens and got good push with Kevin Dotson on the doubles.  He needs to improve on getting movement and not just stalemating in the run game, improve sustaining on the second level and needs to be quicker laterally on outside Zone runs.

In pass protection, he was better with his anchor against power rushers inside and was willing to help his teammates.  He showed good recognition on a looper and after shoving a defensive tackle to the outside he used an airplane block to cut off the rushing lane.  Would like to see him be a little quicker laterally when engaged to mirror pass rushers.

This is the rep from Green (53) where he will push the defensive tackle toward the left guard before recognizing the edge rusher Trey Hendrickson (91) looping around and he will box him out to block the lane.

Overall, Moore had a pretty solid game and he was used on backside hinge blocks, down blocks and to pull on outside runs.  He played every snap for the third consecutive game. He looks good in space and has been effective neutralizing his man on sweep and screens. When blocking on the second level he needs to break down quicker so linebackers can’t run around him.

In pass protection, he uses his length well on outside rushers to push them up the arc and showed good recognition to pick up late rushers and releasing from his help engagement to pick them up. His main issue in the passing game is giving up too much ground against power rushers.  He must learn to drop his anchor more quickly before they get to much depth. Also on his jump set he needs to be able to adjust laterally as well.

Here is the rep from Moore (65) where you see him help inside before working back outside to pick up the blitzer.

Loudermilk got limited reps in this game but he showed improvement in his aggressiveness over the course of the game.  He lined up at the 0 tech, 3 tech, 6 tech and 4i in Bear/tite fronts. His lone tackle came in the first quarter tackling Joe Mixon after a 6 yard gain the play before the Terrell Edmunds interception. He was driven back by the block but he was able to shed and make the play.

He must improve his snap quickness to improve his effectiveness and be more active with his hands. He looked better in his rep as the 6 tech but must do it consistently. So far he hasn’t really varied his pass rush plan relying on power rushes but I think that will come with more experience.

Here is Loudermilk’s (92) tackle. You’ll see him give up some ground on the play but I like the end where he shows the play strength to shed offensive tackle and make the stop.

Norwood’s role was reduced in this game compared to the first two weeks but contributed three tackles in his limited time. His first tackle was after a 12 yard gain on third and 18 to force a punt on Cincinnati’s first drive avoiding a block to make the stop. Tackle number two was on the first play of the late second quarter scoring drive tackling Tyler Boyd for 7 yard gain. The final tackle was another third down stop in the middle of the third quarter.

The Steelers are using a rotation of defensive back depending on the team and situation so I don’t think we can read into his low usage this week.  He played mostly in the slot this week and had a nice rep sitting on a curl route to take that option away but had a couple reps that there was some confusion. There was a rep with stacked receivers that he had James Pierre ended up covering the short route and let the other receiver run intermediate but they weren’t hurt by it.  Later in the game he and Joe Schobert were seen discussing the outcome after both covered the same receiver and the other receiver made the catch for solid gain.

Through three games Harvin’s average has been up and down but solid overall.  His first punt was 45 yards to the 29 yard line.  The second was a good one helping to flip the field driving it 50 yards from his own 7 and was aided by a backward return of 7 yards to net 57 on the punt. Punt number three was intended to pin the Bengals deep but it only traveled 27 yards to the 19 yard line. He finished with a 40 yard kick for a fair catch so I would say two were good and two were adequate. He was handled three field goal team snaps with no issues.