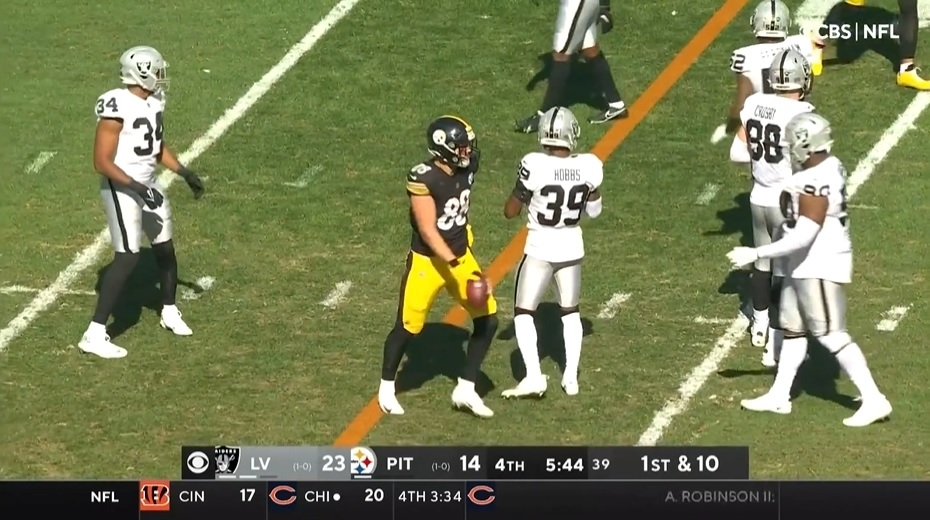 Pat Freiermuth is quickly not only making a positive impression not just on the coaching staff but on his quarterback. So much so that according to Ben Roethlisberger Wednesday, he asked the coaching staff to get Freiermuth more involved in the offense during the second half of Sunday’s loss to the Las Vegas Raiders.

Roethlisberger spoke to reporters about Freiermuth in an interview posted on the team’s website.

“At some point in that game,” he said, “third quarter or something I kinda went to coach said, ‘Hey, we need to get Pat involved.’ Kind of over the ball, some of that shorter area stuff.”

Freiermuth didn’t see his first target until the Steelers’ opening drive of the second half, a 14-yard completion that we broke down this morning, highlighting the improvements he’s made since rookie minicamp. He went on to catch his next three targets, finishing the day with four receptions on four targets for 36 yards.

Through two games, Freiermuth’s caught all five of his targets, a number that’s of no surprise to those who watched him catch everything during training camp and the preseason, for 60 yards. He’s outproducing and out-snapping Eric Ebron, logging 62 snaps to Ebron’s 51 the first two weeks. Officially, Freiermuth’s received the start in both games, the Steelers opening up in 12 personnel against the Bills followed by him being the lone tight end on the team’s first snap versus the Raiders.

He’s done his damage over the middle of the field and a safety valve target against pressure, making combative catches and churning out a little bit of YAC. So far, he’s done everything expected of him and his role on this offense is bigger than some anticipated, myself included.

Freiermuth is one of many weapons in the Steelers’ offense. Roethlisberger hopes sooner or later, one of them has a breakout performance.

“We’ve got a lot of what I think are really good weapons on the outside from receivers to tight ends to running backs. I don’t think we’ve really gotten anybody loose yet that have had good games. There’s a lot of reasons for that. And I’ll take the blame mostly because I’m the one that has to get him the ball.”

Through two games, Diontae Johnson leads the team in receptions with 14 and yards with 141. JuJu Smith-Schuster has maintained his role of a horizontal space player, averaging barely more than nine yards a catch, while Chase Claypool has been the feast-or-famine downfield threat, averaging more than 22 yards a grab but catching well under 50% of his targets. Freiermuth sits fifth on the team in receptions behind those three names and RB Najee Harris, who has six catches and one touchdown.